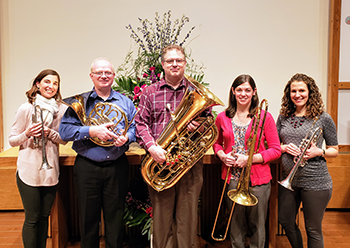 Utter the phrase “brass quintet” to the average listener, and expect a reply that references particular kinds of music, from Renaissance church polyphony and Bach fugues to modernist movements and jazz arrangements. The instrumentation remains common enough to come with such associations, but rare enough that many audiences only get to experience its core repertoire.

Fortunately, the Northeast Ohio-based Diamond Brass pursue the new while respecting the classics. In their April 8 concert hosted by Rocky River Chamber Music Society as part of its 60th season, commissioned and otherwise fresh music dominated an evening that also included staples of quintet literature. Diamond Brass brought sounds both incisive and mellow to West Shore Unitarian Universalist Church. While the hard-walled hall is on the small side for this type of ensemble, it nonetheless blended the quintet’s sound well. Only a moment or two was at the verge of overwhelming force.

Composer Andrew Rindfleisch was in attendance for Diamond Brass’s performance of his In the Zone, a sweet-and-sour tribute to the sacred repertoire that serves as the bread and butter of the brass ensemble world. Straightforward, triumphant tunes unfold, only to turn dissonant later on, making this a bold choice of opener. The group, especially first trumpet Nina Bell, played with crisp articulation. Bell and hornist Greg Hillis sounded fantastic in octaves during John Cheetham’s Scherzo, the lively romp that followed.

Next came Ballyhoos and Hullabaloos, a new suite by Rindfleisch commissioned by the Chamber Music Society in celebration of the anniversary season. Demanding enough that an intermission divided its world premiere into two halves, the piece features each instrument in turn. Trombonist Whitney Clair displayed equal measures of gusto and mastery in the first movement, scooping and diving through the middle and high registers with gorgeous vibrato and tasteful exuberance. Tubist J.c. Sherman gave plush tone and appealing shape to the dreamy melody of the second movement, placing a humorously out-of-sync final note with perfect comic timing.

Returning from the interval, the quintet sounded refreshed for the third movement. Bell and second trumpet Amanda Bekeny blended wonderfully in a duet of hesitant fragments, played first with practice mutes and then, luxuriantly, without. Clair and Sherman’s eventual entrance under the duet partners yielded a chill-inducing harmony. A dissonant opening paved the way for Hillis’s moment to shine. Short both in duration and on opportunities for its featured player to enjoy the limelight uninterrupted, this finale poses daunting challenges. Hillis nonetheless played with technical polish and fierce energy, whooping and soaring all the while.

Substituting a quintet classic, Wilke Renwick’s Dance in place of a planned Bach selection, the ensemble nailed a series of tricky shifts in pulse while bubbling along at a brisk tempo. Surging trumpet scales from Bell and Bekeny gave life to the first movement of Malcolm Arnold’s Quintet for Brass, and Clair excelled in a solo in the slower second movement. After the strange swirling of cup-muted trumpets over Sherman’s lush bass tones, a pristine final chord brought closure to this cornerstone of the ensemble literature.

END_OF_DOCUMENT_TOKEN_TO_BE_REPLACED

Rodgers & Hammerstein’s Cinderella was originally produced for television in 1957 — seven years after the animated Disney film was released — and starred Julie Andrews. According to the Rodgers & Hammerstein website, it was viewed by over 100 million people. END_OF_DOCUMENT_TOKEN_TO_BE_REPLACED

The story line has its origin in an 1855 play and an 1842 farce that Thornton Wilder mined for his 1938 play The Merchant of Yonkers. When that turned out to be a flop, in 1954 Wilder made the crucial decision to re-center the show around the character of the legendary marriage broker Dolly Gallagher Levi and renamed it The Matchmaker. END_OF_DOCUMENT_TOKEN_TO_BE_REPLACED

The Dodero Center for the Performing Arts at the Gilmore Academy in Gates Mills is one feature of an impressive campus. The auditorium is shallow, the stage is deep, and the ensemble played without a shell. Throughout the program, the sound, especially in instruments’ lower registers, tended to disappear. END_OF_DOCUMENT_TOKEN_TO_BE_REPLACED