Founded in 1912, the St. Olaf Choir from Northfield, Minnesota, has cultivated an international reputation as one of the best collegiate choirs in the United States. With their long-time conductor Anton Armstrong, the choir made a stop at Severance Hall in Cleveland on February 3 as part of their 100th annual tour that also included Carnegie Hall, Yale University, and the University of Illinois, Urbana.

The generous concert (over 2-1/2 hours including intermission) included a good mixture of sacred and secular music — some of it not well known — along with a strong component of inclusivity and social justice. Selections ranged from a Bach motet and a colorful African greetings song accompanied by drums, to several new works.

Michael Haydn’s setting of verses from Psalm 122, Laetatus sum (“I rejoiced with those who said to me, let us go to the house of the Lord”) opened the program with clear, focused, and well-blended sound from the Choir, accompanied by strings and two oboes. Jewish Italian Baroque composer Salamone Rossi’s Hebrew Psalms are neglected gems of the choral literature. The unaccompanied Elohim Hashivenu began with a few pitch problems, but the choir settled in during the course of the piece. The major work of the first group was J.S. Bach’s motet Der Geist hilft unser Schwachheit auf. The performance was accomplished and the choral texture clear, although I might have wished for greater vitality in individual phrases.

The real find on the second part of the program was a short work by Woldemar Voullaire (1825-1902). Selig Sind die reines Herzens sind (“Blessed are the pure in heart”) sets a fragment from The Beatitudes with string accompaniment. Voullaire’s mostly chordal setting, sumptuously performed, shares a strong harmonic resemblance to the music of Johannes Brahms.

Ralph M. Johnson’s On Horizon’s Brim, a celebration of nature and the importance of environmental awareness and protection, had a varied sound palette and moods. Matthew Peterson’s Adoramus Te was austere, occasionally reminiscent of Arvo Pärt’s choral music, but with moments of significant drama. Jake Runestad’s rhythmic Alleluia, which showed the choir at its best, featured sharp dynamic contrasts, overlapping contrapuntal lines, vocal glissandos, and even soft, precise clapping, all in the setting of a single word. 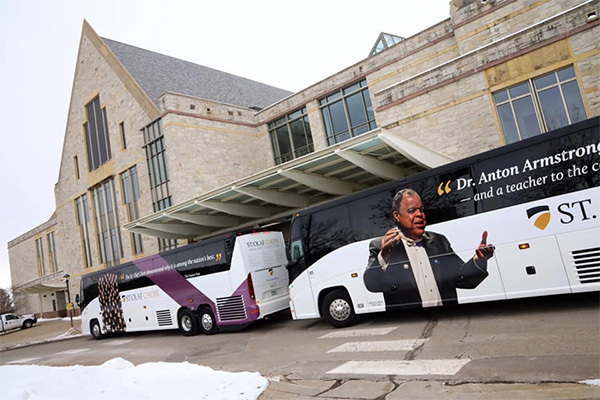 After intermission, the emphasis was on social justice, with Rosephanye Powell’s arresting Sorida, whose African drums, piano, and vocal ostinatos supported a joyous greeting and admonition to love one another.

Armstrong had enough strong, low basses in his choir to give a creditable reading of Alexander Gretchaninoff’s Our Father, not a setting of the Lord’s Prayer, but a collection of biblical texts advocating support of the poor and mercy for all.

The highlight of this group of works was Jayne Southwick Cool’s When Memory Fades, an affecting meditation about a loved one suffering from dementia. The choir’s sound and diction were superb in a piece that required fully comprehending the words (complete texts and translations were included in the program book). At the end of the sung text, the piano accompaniment continues for a few measures, pausing, and finally coming to a halting end. The audience was transfixed in silence — the piece had clearly resonated with its listeners.

The closing section of the program was secular, including Lammaa Badaa Yatathanna, a traditional Arabic song arranged by Shireen Abu-Khader about spying the beauty of a lover in the distance. There was a lovely arrangement of Danny Boy by the recently deceased American conductor Joseph Flummerfelt, a setting of Robert Burns’ O My Luve’s Like a Red, Red Rose by René Clausen, and to close, three contrasting concert spirituals — My Lord, What a Mornin’, City Called Heaven, and My Soul’s Been Anchored in the Lord, the latter in a brilliant and complex arrangement by Moses Hogan that allowed the Choir to let loose and sound its absolute best.

St. Olaf Choir concerts traditionally end with an arrangement of the Silesian folk tune Beautiful Savior by its founder, F. Melius Christiansen. The old-fashioned, beloved piece was immaculately performed, and I’m sure many in the audience were singing along in their own inner ears.

The Severance Hall performance was the eighth of thirteen concerts in fourteen days on the St. Olaf Choir’s itinerary. As well trained as the choir is, sometimes their concentration wavered. But to their credit — and their conductor’s — they persevered, and overall gave very fine performances.

END_OF_DOCUMENT_TOKEN_TO_BE_REPLACED

The Orpheus myth inspired French Baroque composers Jean-Philippe Rameau and Philippe Courbois to write expressive solo cantatas about the famous Greek musician-poet and his futile attempts — because of his own impatience — to rescue his beloved Eurydice from the grasp of Pluto in the Underworld. These are beautifully performed by the clear-voiced soprano Hannah De Priest and the velvet-throated baritone Jonathan Woody (who makes a walk-on appearance in the Rameau). END_OF_DOCUMENT_TOKEN_TO_BE_REPLACED

Now that live concerts are beginning to proliferate, it was delightful to hear Oberlin cello professor Darrett Adkins ring a change on the solo suite format with his Hypersuite No. 3 on September 28 in the Cirigliano Studio Theatre at Lorain County Community College. His program opened the new season of Signature Series performances in Elyria, and was dedicated to the memory of Eva Hornyak. END_OF_DOCUMENT_TOKEN_TO_BE_REPLACED