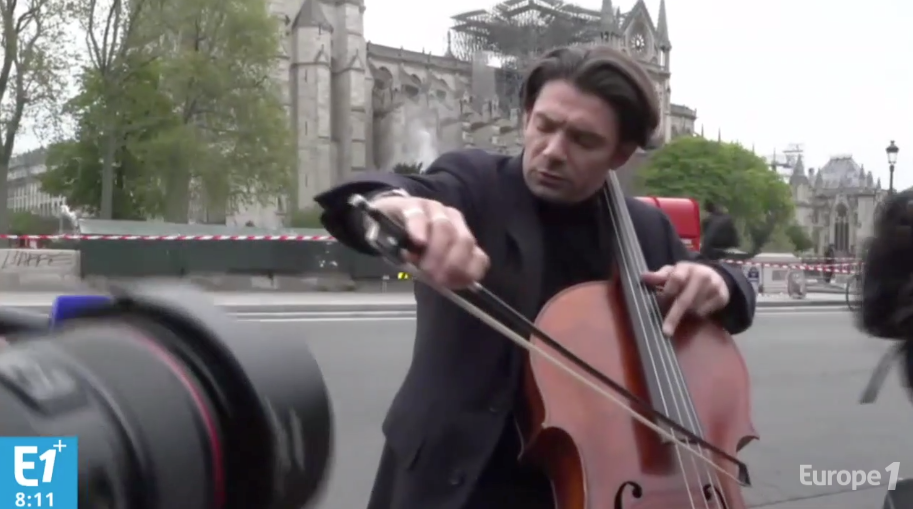 “For us cellists, Tchaikovsky’s Rococo Variations is a very important piece in our repertoire,” Gautier Capuçon said during a recent telephone conversation. “It’s very delicate and extremely difficult.”

On Thursday, April 28 at 7:30 pm at Severance Music Center, Capuçon will perform that virtuosic work with The Cleveland Orchestra under the baton of guest conductor Michael Tilson Thomas. The program also induces Tchaikovsky’s Polonaise from Eugene Onegin, Fauré’s Elegy, and Britten’s Suite from The Prince of the Pagodas. Additional performances take place on Friday at 7:30 pm, Saturday at 8:00 pm, and Sunday at 3:00 pm. Tickets are available online.

“I’m looking forward to being back in Cleveland,” Capuçon said. “It’s such a fantastic orchestra, and Michael Tilson Thomas is a dear friend. And with all he’s going through, music is so important to him — it gives him energy. So this week is going to be very special.”

The cellist noted the influence that Mozart’s music had on Tchaikovsky — influences that can be heard in the character, mood, and atmosphere of the work’s seven variations. “It’s like a magical miniature of incredible music,” Capuçon said. “It is very delicate but so beautiful and explores all the emotions of the cello. It’s so virtuosic but it shouldn’t sound virtuosic. And it has a great dialogue with the orchestra which I am looking forward to playing with those incredible musicians.”

Written at the end of the 19th century for German cellist Wilhelm Fitzenhagen, the work’s original version is different from the one we’re used to hearing — “the Fitzenhagen version, which is the one I am going to play,” Capuçon said. “The story with Fitzenhagen is that he re-arranged the order of the variations and the ending, without asking permission from Tchaikovsky.”

Our conversation returned to the word ‘delicate’ as it pertains to the very opening of the piece. What goes through a cellist’s mind just before their first entrance? “That’s an interesting question. Of course Tchaikovsky opens the piece with the theme in the orchestra and then the cello comes in. And it is a big responsibility because it is so delicate, to use that word again. When the cello does come in, basically you’re totally naked with this very simple, very beautiful phrase that should be elegant. The phrasing is so important and the articulations are always at the service of the music. So that is probably the most difficult part, although it sounds the easiest.”

As with so many conversations these days, this one too touched on the topic of how much the world has changed in the past few years. Capuçon noted the passing of pianist Nicholas Angelich, who was a close friend of the cellist and his brother, violinist Renaud Capuçon. And the passing of composer Harrison Birtwistle and pianist Radu Lupu.

“The great news is that live music is back, the concert halls are open again, and we can share the music,” Capuçon said. “And I think more than ever I feel lucky to be able to perform.”

Capuçon did find many ways of keeping busy during the pandemic and was recently awarded the French Legion of Honour, the highest French order of merit, in recognition of his efforts to bring music to France during the Coronavirus pandemic.

“First I should say that my wife was very disappointed because she thought that for once she would have her husband just for herself, at home not doing anything. But the fact is that I did many things.”

Those many things included posting a different video every day. “I think music, and culture in general, was so important when everything was closed and everybody was at home,” he said. “I think we all needed to share and express the new emotions we were facing —  it was a very difficult situation.” (Pictured above: Capuçon playing outside the Cathedral of Notre-Dame after the tragic fire of April 15, 2019.)

He also spent time with the young musicians who are part of Orchestre à l’École (Orchestra School). “There are 42,000 kids in France in this program and I am an ambassador, so that was a great opportunity to spend more time with them on video. I also did lots of things with kids who were in hospital and people in health care. It was so important to show them that we were supporting them.”

And since all of the concerts and festivals in France were canceled, Capuçon wanted to find a way to bring music to the people. “I created a tour called Un été en France — A Summer in France — where I was playing outdoors in small towns and villages. I did 23 concerts that summer. This summer, 2022, will be the tour’s third edition. Last year I brought 27 young artists — 16 instrumentalists and 11 dancers for 17 concerts, and this summer will be the same.”

Capuçon also took time to expand on his efforts to provide educational and performance opportunities for musicians ages 18 to 25 years old. “Before COVID it was very hard to find concerts and access the stage to start your professional life as a musician. I think now, after COVID it’s even more difficult,” he said. “I realized that I want to reinforce my engagement with that younger generation to help them as much as possible, so I created my own foundation.”

It was formed in January and the first round of scholarship recipients are soon to be announced. The foundation also plans to release a recording each year on Warner Classics, the first of which will be released on the 17th of June. “It’s from a 20-year-old French pianist, Kim Bernard, and he’s playing music of Chopin, Debussy, and Ravel,” Capuçon said. “I’m very happy to have the foundation. It’s a lot of work and requires a lot of energy, but I think it is extremely important.”

END_OF_DOCUMENT_TOKEN_TO_BE_REPLACED

Franz Welser-Möst led the final bows on Saturday night at Severance, like the star of any show should. The Cleveland Orchestra’s music director is in his element presiding over the ensemble’s annual opera production, which this season packs the drama. Verdi’s Otello — in a concert staging that opened May 21 and runs for two more performances (May 26 and 29) — demands big voices, instrumental forces to match, and a conductor who can give it all shape and direction. END_OF_DOCUMENT_TOKEN_TO_BE_REPLACED

The cimbalom was the feature of the show, an instrument capable of taking on many personas. Its performer, Chester Englander, has shaped his career around the instrument, and has inspired composers to write more repertoire for it, some of which was presented on the program. END_OF_DOCUMENT_TOKEN_TO_BE_REPLACED