American pianist Jonathan Biss commissioned five new works as companions to the five Beethoven piano concertos. Shaw’s Watermark, premiered in 2019, is a companion to Beethoven’s Third. It is in three large segments, corresponding to the concerto’s movements, and played without pause. Snippets and sometimes complete passages from the original work invade Shaw’s transformations in new contexts, creating a constantly evolving set of textures and harmonies unthinkable to Beethoven. Sinuous melodies emerge, sometimes above massive, slow-moving, sinister chordal blocks in the low strings and brass.

The second section is slow and ethereal over a long pedal point that exists in several octaves. The soloist plays thematic fragments, repeated incessantly but with slight alterations. The third section begins with a solo passage ripped right out of Beethoven’s concerto, but which is immediately translated into something new. Although Shaw’s work is modern, with occasional dissonance, the overall sense is one of evolving, recognizable tonal harmonies and musical progression.

Biss was compelling in the virtuoso solo part, his deep familiarity with Beethoven apparent. The concerto ends softly, as it began, with musicians of the orchestra quietly humming a single unison note. This is a work that can, and should, be taken up by many other orchestras and performers. 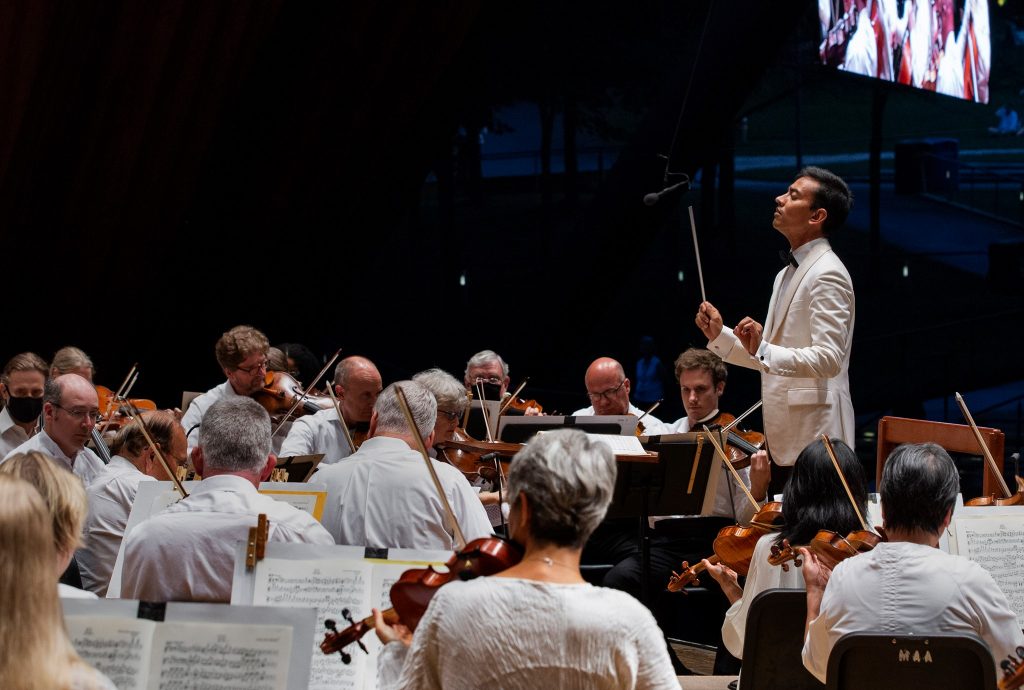 Edward Elgar’s Enigma Variations filled the second half of the program. The work is probably his most famous, even if its categorization as “greatest” in the program notes might be challenged by his symphonies and oratorios.

Vinay Parameswaran captured the variety of moods and styles of the theme and its fourteen variations, each a musical portrait of one of Elgar’s friends expressed through different tempi, orchestrations, and uses of the musical theme. Some highlights included Variation 6, “Ysobel” (Isobel Fitton, a viola-playing friend of Elgar, whose instrument is highlighted here) and the seemingly chaotic Variation 7, a tribute to an architect whose piano-playing skills left something to be desired.

Variation 9, “Nimrod,” is often played as a standalone piece (sometimes in transcription for solo organ) at memorial services. It is a stately masterpiece of crescendo to fortissimo climax, quickly dissolving to utmost softness. Principal cello Mark Kosower was a touching soloist in Variation 12, a tribute to scientist and amateur cellist Basil Nevinson. Variation 14, labelled “E.D.U.” is a self-portrait under the nickname Edu, given to him by his wife Alice. It portrays imperial Britain at its most powerful in its use of march and rhythm, rising to a grand climax, here complete with (digital) full organ filling out the orchestral sound.

On the opposite end of the program was a deft performance of Beethoven’s Coriolan: Concert Overture, Op. 62. It is perhaps not top-drawer Beethoven, but it was rousing, and set the stage for the two other, more substantial works.

END_OF_DOCUMENT_TOKEN_TO_BE_REPLACED

Supported by engagingly, yet simple staging by Cara Consilvio, a well-prepared cast of singers told the archetypal story of Cinderella with charm and flair. Framing the production was  a sparse but colorful set and wonderful lighting by Dave Brooks. END_OF_DOCUMENT_TOKEN_TO_BE_REPLACED