It was purely musical pyrotechnics on Saturday when the ensemble brought this pair of tone poems to sparkling life. Some of that vibrancy is inherent in Respighi’s compositions, which evoke a rarefied atmosphere and often require a specific instrumentation to achieve the effect. Certain passages in Pines of Rome — such as the calm of the recorded nightingale call that closes the third movement, or the steady build across several auxiliary brass sections for the “Appian Way” ending — never fail to rouse.

But just as important is an interpretation that sees to every intricacy. Clearly an experienced hand at conducting these works, Jader Bignamini gave an assured Cleveland Orchestra debut with this performance. He avoided a common pitfall in Pines — a “Catacomb” section that can drag — and kept the chant-like ostinato that emerges  rolling from the bass instruments. With Fountains, his pacing was near perfect. He allowed the space for sensitive solo playing in the outer movements while controlling the bursts of energy at the piece’s center.

For all the lovely wind writing in that earlier work, it wasn’t until Pines that the soloists truly shone. Principal trumpet Michael Sachs, in an offstage part, and principal clarinet Afendi Yusuf, playing as soft as he dared, contributed expressive moments that were as powerful as anything from the full orchestra. 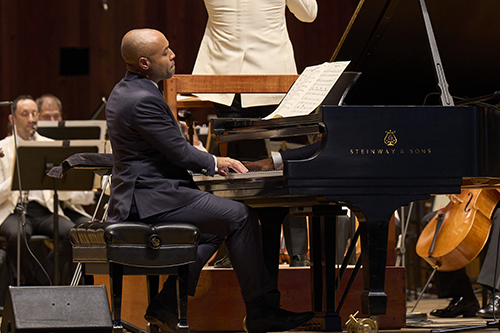 It all combined to give the impression of a relaxed opening act, though that doesn’t do justice to the complexities of Williams’ score. Her ambitious 12-movement suite, each section dedicated to an astrological sign, traces the history of jazz in the mid-20th century, from the boogie-woogie bassline in “Gemini” to the bebop stylings of “Virgo.” The addition of orchestral accompaniment is reminiscent of Duke Ellington’s symphonic compositions of the same era — and like those iconic Ellington suites, this is music that has endured in album form but sometimes struggles in a concert setting.

Leading the trio, Diehl brought the right sort of freewheeling spirit to the keyboard, at one point cueing a movement by stomping off the beat with his heel, but his solos were too tightly managed to really be improvisational. Soprano Mikaela Bennett added her voice to the grand finale, “Pisces,” soaring in a couple of high notes that took off with all the splendor you might expect from an orchestra program. 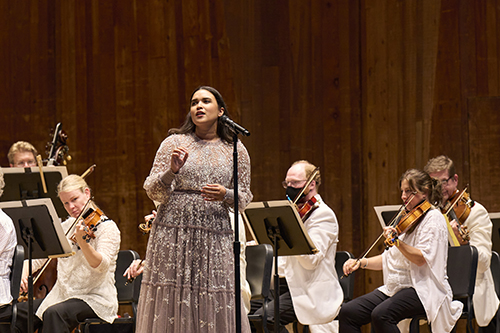