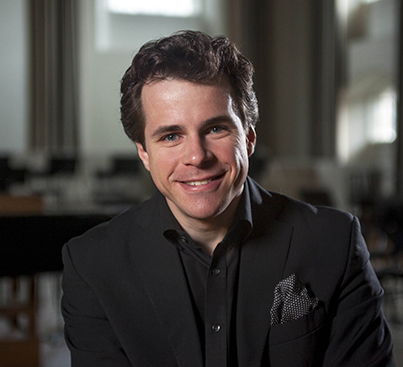 The single movement, 25-minute work for orchestra, chorus, children’s choir, and pre-recorded tape was awarded the 2003 Pulitzer Prize for Music.

“I’ve never conducted this piece before,” Hrůša said, during a telephone conversation, “and to be honest with you and anyone who will read this, it is the first piece by John Adams that I have done.”

The conductor said that he was honored when Mark Williams, the Orchestras Chief Artistic Officer, invited him the lead the Cleveland premiere of the work. “It’s a privilege, and a natural way for me, as a European, to contribute to the remembering of this profound, tragic event. [Adams] turns a traumatizing experience into something that is artistically meaningful and I’m happy that I can be part of it.”

By Mahler’s standards, his fourth symphony is on the small side, at least when you compare it to the composer’s symphonies Nos. 2 and 3. “Mahler was always ambitious to bring something new to his symphonies,” Hrůša said. “He never stopped testing the limits of his own creative force, and the patience of his audiences. I do think that No. 4 does test those, but in a completely different way — with its unexpected subtlety and chamber music quality.”

For Hrůša, the most striking feature of the symphony is its finale, which is said is not a finale in the common sense of the word. “It’s a child’s song (Das himmlische Leben),” he said, adding that Mahler did not intend it to be sung by an operatic soprano, but by someone with a childlike voice. “It should have a naïve or innocent sound.”

Hrůša noted that the symphony finishes on an intimate scale. “It just evaporates. It has no ending that confirms some sort of success. It’s chamber music at its best. It’s one of those symphonies or pieces of art, that when they finish, you feel maybe half-satisfied, and moved to think further to think about your life. The best art stimulates one to deeper thought, and I think that Mahler Four does that. It’s a masterpiece with nothing else like it out there in the history of music.”

Over the past few seasons Hrůša has made many visits to Severance Hall, and his programs usually include a gem from the Czech repertoire, these concerts being the exception.

“I have a fantastic relationship with The Cleveland Orchestra — I’ve done such a variety of repertoire, from the standard warhorses to the specialties of my own cultural heritage, to amazing accompaniments with great stars from the soloist scene, but I have not done American music, and for me, this aspect is extremely important. This should not just be about me bringing or imposing what I like. It is a two-way street. It should be a cultural exchange and a sharing of beauty.”

END_OF_DOCUMENT_TOKEN_TO_BE_REPLACED

Rodgers & Hammerstein’s Cinderella was originally produced for television in 1957 — seven years after the animated Disney film was released — and starred Julie Andrews. According to the Rodgers & Hammerstein website, it was viewed by over 100 million people. END_OF_DOCUMENT_TOKEN_TO_BE_REPLACED

The story line has its origin in an 1855 play and an 1842 farce that Thornton Wilder mined for his 1938 play The Merchant of Yonkers. When that turned out to be a flop, in 1954 Wilder made the crucial decision to re-center the show around the character of the legendary marriage broker Dolly Gallagher Levi and renamed it The Matchmaker. END_OF_DOCUMENT_TOKEN_TO_BE_REPLACED

The Dodero Center for the Performing Arts at the Gilmore Academy in Gates Mills is one feature of an impressive campus. The auditorium is shallow, the stage is deep, and the ensemble played without a shell. Throughout the program, the sound, especially in instruments’ lower registers, tended to disappear. END_OF_DOCUMENT_TOKEN_TO_BE_REPLACED