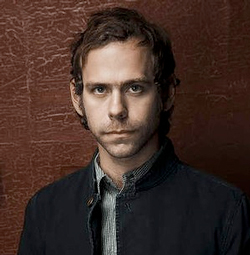 The 45-year-old has won GRAMMY Awards for Best Chamber Music Performance (2016) for Murder Ballads, performed by Eighth Blackbird, and Best Alternative Music Album (2018) for Sleep Well Beast with the The National, which includes Dessner and his twin brother Aaron on guitar, piano, and keyboards.

On Friday, November 26 at 7:30 pm and Saturday at 8:00 pm in Mandel Hall at Severance, pianists Katia and Marielle Labèque will perform Dessner’s Concerto for Two Pianos with The Cleveland Orchestra under the direction of Gustavo Gimeno. The program also includes Ravel’s Suite from Ma Mère l’Oye (“Mother Goose”) and Franck’s Symphony in d. Tickets are available online.

During a recent Zoom call from his home in Paris, Dessner said that although he had known of Katia and Marielle Labèque for some time, they did not meet until 2015 when the composer and duo-piano team found themselves sharing a concert with Gustavo Dudamel and the Los Angeles Philharmonic. The program included the premieres of Dessner’s Quilting and Philip Glass’ double piano concerto.

“We met during the rehearsals and became best friends,” Dessner said. “They became almost like an adopted family to me in France. I spent a lot of time with them and that quickly developed into an important musical relationship.”

Dessner said that even before they met, Katia and Marielle knew his music through the recording St. Carolyn by the Sea, which was released on Deutsche Grammophon.

Although their conversations soon turned to the discussion of a concerto, Dessner said, “I took the opportunity to write a two piano piece for them called El Chan. It’s a piece I really like — it sounds simple but it’s incredibly difficult with hovering polyrhythms. It’s the kind of piece that would drive an orchestra mad.”

The composer said that writing the concerto was akin to climbing a mountain. Written in the typical three-movement, fast-slow-fast format, he noted that it “at times it almost operates like a concerto grosso, where the two pianos are driving the orchestra.” He described the cadenza as very simple music that is basically a song without words.

Musically speaking, he said the concerto is 100% Dessner. “People often hear rhythmic lines in my music and think minimalism. Although I use certain techniques that might be more associated with minimalist composition, I’m more influenced by Bartók, Stravinsky, or folk music.”

While writing the concerto Dessner had the pleasure of allowing himself to dream. “The nice thing about working with soloists like Katia and Marielle is that they dedicate themselves to the process. They gave me feedback as I was writing. For instance in the middle movement there’s a lyrical moment with a rising melody that in the original score happened only once. But Katia and Marielle insisted on repeating it. ‘You finally wrote a melody, can we hear it again.’ So it was a beautiful collaboration.”

Another trait of the Labèque sisters that Dessner admires is that they treat all music equally, whether it’s Mozart, Poulenc, Martinů or Bryce Dessner. “It’s all equally important and deserves the same attention in rehearsals, and that was a new experience for me. I’ve typically worked with either dedicated new music ensembles like Eighth Blackbird who mostly play music by living composers, or with orchestras where the new piece on the program is in between an overture and the symphony. Sometimes rehearsals can go really well but sometimes it can be hard.”

Dessner said that it’s a great honor for him to have the concerto presented at Severance Hall with The Cleveland Orchestra. “I’ve been listening to the Orchestra for years, so this is one of those dream situations. This is the first time I’ve worked with Gustavo Gimena, and it’s the first time he’s doing the concerto with Katia and Marielle, so it’s really special for me to work with a conductor of that caliber.”

Our conversation turns to the topic of labels: Dessner is often referred to as an indie rock guitarist who has found his way to classical music. So which came first, rock or classical?

“The secret is that classical music came first and I think people tend to be so surprised. It’s interesting because in many worlds, not just classical, people like to talk about the different influences in concert music or in rock and roll, but when the influences actually happen, they’re like, ‘Oh how weird, how is this happening?’”

Dessner grew up playing classical flute but switched to classical guitar. He earned his undergraduate and masters degrees in music at Yale University. “After that I moved to New York and started playing chamber music. And then I started a band with my brother but I have had bands with my brother since we were kids. Most of the living composers that I know either have a band or had some form of performance experience.”

The composer/guitarist said that he grew up listening to his dad’s rock and jazz records. His father was a jazz drummer and his sister was a ballet dancer. “My experience with classical music was seeing her with the Cincinnati Ballet and hearing Tchaikovsky and Stravinsky or whatever. So music to me always felt like this big and vast world of collaboration with lots of possibilities.  So yeah, I don’t really love that ‘indie rock guitar player’ — even saying indie rock is a little…(laughs) — but I understand.”

Dessner said regardless of genre, music is all about collaboration. “I do it for the reasons that most people do, and that is we are passionate about the repertoire and passionate about getting work with musicians who have spent their entire lives learning to master an instrument, whether that be Katia and Marielle Labèque or the violins in The Cleveland Orchestra. Whoever, these are unbelievable artists and those exchanges are what is so impassioned in me.”

Even when the collaborations don’t quite go as planned, Dessner said that he always learned something. “There have been many times when a double bass player has taken  me aside and said ‘this passage right here, it’s really cool but impossible.’ But that experience of hearing and seeing them — I always learn something. What is beautiful about a rock band is that it’s never about who plays the best guitar or who’s the best drummer, it’s about the chemistry of the musicians. And the same is true in an orchestra.”

Moving on to the topic of orchestras and the presentation of newly composed works, Dessner said that one of his favorite pieces is a work championed by Franz Welser-Möst and The Cleveland Orchestra. “I think that Hans Abrahamsen’s let me tell you with [soprano] Barbara Hannigan is one of the greatest works of this century.”

Dessner noted that when it comes to new music, a lot has changed since he finished school in the late ‘90s. “There weren’t a lot of festivals happening, New Amsterdam Records did not exist. There was a need for different outlets. I started a music festival in Cincinnati called Music Now, which has been going for sixteen or seventeen years. We have done a lot of new commissions, and it eventually evolved into a collaboration with the Cincinnati Symphony. I like participating in that, but I don’t necessarily consider myself a curator in a professional way, I think there are people who do it a lot better than me. But I like being involved. It’s kind of like performing — being part of the conversation.”

After a long silencing of concert halls, Dessner said that he is enjoying a rare season. In addition to the Cleveland performances, his Trombone Concerto and Violin Concerto are being performed in Paris. And the Czech Philharmonic is presenting Mari. “There’s a lot of orchestral activity which is the fruition of many years of work,” he said. “It’s quite exciting, but I also realize that it is the rare chance that I have to present my work in subscription — so it will be played multiple times, which is exciting.”