“It’s fun to see people stretch their musical tastes in opposite directions,” tenor John Hagen, who is one third of the popular classical crossover trio, The Texas Tenors, said during a telephone conversation. “You take the fan who’s at one end of the spectrum, either classical or country, and hear how they have come to appreciate other genres of music that they haven’t listened to very often, if at all.”

Since their debut eight years ago on NBC’s America’s Got Talent, the Trio has amassed a list of awards including three Emmys for the PBS special You Should Dream. They have performed more than 1,000 concerts around the world and collaborated with many Symphony orchestras including the Cleveland Pops, the Houston Symphony and the Pittsburgh Symphony. In 2018, The Tenors will make their Canadian debut at Toronto’s Royal Conservatory of Music.

Sunday’s concert will feature many of the songs from their latest recording, RISE, released on September 8 of this year, and the Trio’s second PBS special, The Texas Tenors: RISE, that began airing nationwide in August. Click here for broadcast information.

“There will be a little bit of everything,” Hagen said. “A mixture of original tunes as well as some great covers of the Eagles’ Desperado, Bruno Mars’ Just the Way You Are, and The Righteous Brothers’ You’ve Lost That Lovin’ Feelin. And of course, a Classical piece, along with few songs that are not on the album.” Although on the recording The Tenors are backed up by a 65-piece orchestra and full choir, the Stambaugh show will be more intimate. “Like the majority of our concerts, it will just be us and our band, but we do around twenty symphony orchestra concerts a year.”

Hagen, who made his Lincoln Center debut in Teatro Grattacielo’s production of Mascagni’s Gulglielmo Ratcliff, has performed operatic roles from Alfredo in La traviata to the title role of Otello for Cleveland Opera on tour. His Broadway roles include Billy Bigelow in Carousel and Che in Evita. He explained that the Trio’s first PBS special, which aired in 2013, came about through a professional relationship they had with the Phoenix Symphony. “Some people from KAET asked us if we had ever thought about doing a Public Television special. Long story short, we collaborated with the Symphony and it was very well received. And when PBS asked us to do another one, we thought, why not?” 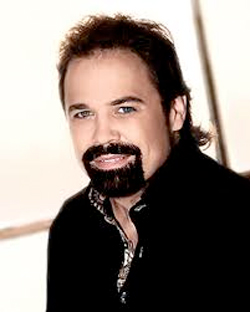 Hagen said that PBS is a natural fit, noting that the three of them grew up watching Public Television. “PBS has been, is, and will continue to be an important part of our lives. When I was a kid there wasn’t cable TV, it was the three networks and PBS. I watched Great Performances from Lincoln Center and the exposure that I got from Public Television was important in terms of the arts, and those shows have had a huge impact on all three of us. And now here we are on PBS Television ourselves. It’s pretty wild to think about.”

Although JC Fisher and Marcus Collins met nearly twenty years ago when they were cast as production singers for Celebrity Cruise Lines, Hagen met Fisher when they were working a construction job. “You can believe that or not, but we were doing the starving artist thing,” he said. “JC had the idea of putting together three tenors of different voice types and trying to cover different genres of music, and this is what we came up with. As they say, the rest is history.”

When The Tenors decided to take the audition for America’s Got Talent, he admitted to being a little skeptical about the idea. “My first thought was, I don’t know, because the night I watched it I saw some pretty strange stuff. But it did end up being a great thing for us. The exposure and publicity you get from being on National TV for twelve weeks is priceless. At that time, it was aired in over sixty countries. We work very hard but we do feel fortunate because without that exposure, who knows where we would be. But it wouldn’t be where we are, that’s for sure.”

Born in Waverly, Iowa, Hagen is the son of two music teachers — his father was a high school choral director. “Dad formed a jazz choir because he felt it would train the ears of the young singers with all of the tight harmonies. I grew up being exposed to a lot of classical music and jazz as well. The one thing I didn’t grow up listening to was country music. Not that I didn’t like it, I just wasn’t exposed to it.”

Being that Hagen’s father was a tenor, there were plenty of recordings of the world’s greatest tenors in the house “I got hooked on Pavarotti as a young teen and I always did appreciate opera,” Hagen said. “I heard some great opera singers at a young age. I met Robert Merrill when I was twelve. Years later I ran into him in New York when I was in my 30s and I told him I remembered meeting him. He pinched my cheeks and said ‘Thank you, my boy.’ I had never forgotten his voice and the influence it had on me. It was like a giant cannon coming out of his body.”

When it came time for Hagen to enter college, he set his sights on music education. “I wasn’t thinking about singing as a career, but rather doing something like my father — building a good choral program somewhere, whether it be in a high school or college. It wasn’t until later that I became interested in performing, but as I got cast in a few things simply because I could sing, I thought, Oh, I kind of like this.”

It was during graduate school that he became truly interested in singing. “I became an audiophile of the great tenors and would listen to the same aria by ten tenors. I loved analyzing the differences in the recordings, the way each singer would interpret a piece, and their different techniques. That’s how nerdy I was.”

Wrapping up our conversation, I ask Hagen how The Texas Tenors have evolved as an ensemble since their breakthrough on America’s Got Talent. “We’ve learned how to cross musical boundaries better,” he said. “And musically speaking, we’ve grown significantly, which would make sense after over a 1,000 performances. I always laugh when somebody says that we just keep getting better and better — I’m glad that it’s not the other way around.”

END_OF_DOCUMENT_TOKEN_TO_BE_REPLACED

Rodgers & Hammerstein’s Cinderella was originally produced for television in 1957 — seven years after the animated Disney film was released — and starred Julie Andrews. According to the Rodgers & Hammerstein website, it was viewed by over 100 million people. END_OF_DOCUMENT_TOKEN_TO_BE_REPLACED

The story line has its origin in an 1855 play and an 1842 farce that Thornton Wilder mined for his 1938 play The Merchant of Yonkers. When that turned out to be a flop, in 1954 Wilder made the crucial decision to re-center the show around the character of the legendary marriage broker Dolly Gallagher Levi and renamed it The Matchmaker. END_OF_DOCUMENT_TOKEN_TO_BE_REPLACED

The Dodero Center for the Performing Arts at the Gilmore Academy in Gates Mills is one feature of an impressive campus. The auditorium is shallow, the stage is deep, and the ensemble played without a shell. Throughout the program, the sound, especially in instruments’ lower registers, tended to disappear. END_OF_DOCUMENT_TOKEN_TO_BE_REPLACED