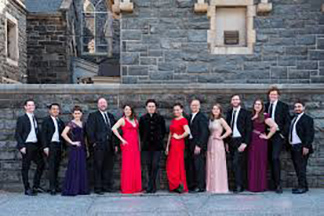 Washington, D.C.-based choir The Thirteen sang a concert at the Cathedral of St. John the Evangelist in downtown Cleveland on Wednesday evening, October 23, as part of their current tour. The group includes twelve singers, plus director Matthew Robertson, hence his joking suggestion of the hashtag #bakersdozen for social media. The ensemble, founded in 2012, was making its first Cleveland appearance.

The intriguing program, “Tallis Through the Looking Glass,” was organized into three sections, each of which paired works by English Tudor composers — mostly Thomas Tallis or William Byrd — with works from the 20th and 21st centuries. A central segment paired metrical psalms from Tallis’s Archbishop Parker’s Psalter with Sacred Harp hymns from 19th-century America. Bookending the concert were two choral masterpieces: Benjamin Britten’s Hymn to Saint Cecilia and Tallis’s Gaude gloriosa Dei Mater.

Opening with the Britten was a daring but not completely successful idea. The text for the work, complex and full of allegory and colorful allusions, was written by Britten’s friend W. H. Auden. Robertson chose a brisk tempo for much of the piece, and acoustics and tempo conspired to make Auden’s ornate language a muddle, even with the full text printed in the program booklet. In a smaller, drier room this performance would have been fine.

No such complaint can be made about Byrd’s Agnus Dei from the Mass for Four Voices. The texture was clear, the blend and intonation pure. The work’s harmonic movement is simpler and slower than Britten’s, so the acoustic didn’t work against The Thirteen.

American composer Meredith Monk has been in the forefront of avant-garde composition and performance for decades. Her textless “Astronaut Anthem” is an excerpt from The Games: A Science Fiction Opera, which takes place in a post-nuclear future, where survivors ritualize moments of Earth’s culture in order to preserve them. The music is arresting: the choir hums and uses vowel sounds (“Ah”), bridging the gap between chant and folk song. As the work progresses, textures and harmonies become more complex and unearthly, both mysterious and hypnotic. At the end the sopranos make a long upward glissando, as if vanishing into the sky.

The idea of pairing Tallis’s psalter hymns with American shape-note songs was brilliant. Both were inspired by Puritan movements. In Tallis’s case, it was a mechanism to continue to compose during the English Reformation, when music was decreed to be simple (one note per syllable), and not elaborate like the settings that preceded Henry VIII’s break with Rome.

Shape-note singing originated in New England but migrated to the American South in the mid-1800s, prompted by the publication of The Sacred Harp, a ubiquitous collection of hymns printed with notes on a staff in shapes that denoted the pitches to be sung. Participants who couldn’t read music could read the shapes.

The Thirteen sang four pairs of these songs. The most familiar of the Tallis hymns was God Grant We Grace, known to many as Tallis’s Canon. The melody appears in the tenor part like the tunes of shape-note hymns. The traditional sound of shape-note singing is raw and loud, with emphasis on strong four-square rhythm. It’s difficult for trained singers to sing in this authentic style, but The Thirteen bridged the gap, with the adoption of some vocal mannerisms like sliding pitches between notes and emphasis on the text. It was a reasonable facsimile of a singing tradition that is still very much alive.

This segment of the program ended with American composer Caroline Shaw’s deconstruction of the gospel hymn When I die, Hallelujah, by and by, I’ll fly away. The tune and text are stripped to their elemental nature, sometimes just with vowel sounds, parallel chords not necessarily related to the tune, and silences that become important punctuations. The Thirteen’s intonation and ensemble were perfect, and the closing moment, when a solo tenor sings a phrase of the tune by himself, was magical.

Henry Purcell’s brief motet I Was Glad was written for the coronation of King James II in 1685, when Purcell was director of music at Westminster Abbey. The motet alternates chordal passages with counterpoint. On Wednesday, Purcell’s diatonic harmonies were set in contrast with Ted Hearne’s setting of Agnus Dei, in which strong dissonances slowly fade in and out of harmonic focus. But at the end, with the closing word pacem (“peace”), the dissonance finally resolves to a major chord. As with Caroline Shaw’s piece, Hearne’s setting was a high point of the concert, showing the talents of The Thirteen at their best.

Thomas Tallis’s Gaude gloriosa Dei Mater received a magnificent performance. Based on a long text praising the Virgin Mary, it can be considered a longer but less dense cousin of Tallis’s more famous 40-part motet Spem in alium. The six-voice harmony offered little respite to the singers; they were almost always singing. The text almost didn’t matter. The sound reverberated around the cathedral, and the warmth of the harmonies wrapped the audience in a wash of sound in which the counterpoint moved from voice to voice. It was a perfect way to end the evening.

With this work, premiered in 1907, Sibelius offered a bold departure from the explosive emotionalism so prevalent in late-Romantic era music. This symphony was a renewed embrace of Classicism’s purity of form and melody, and one that, oddly enough, left many initial audiences of the day somewhat bewildered. END_OF_DOCUMENT_TOKEN_TO_BE_REPLACED

After eating a Po’boy from The Dawg Bowl Cajun food truck, I caught the first half of Brian Culbertson’s show in The Connor Palace Theatre. END_OF_DOCUMENT_TOKEN_TO_BE_REPLACED