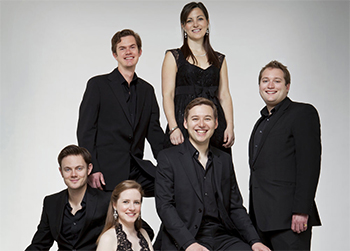 To speak of our era as one of unlimited access to global cultures is to imply — often inaccurately — that availability necessarily leads to familiarity. In the cases of art forms with deep roots in a particular place, no amount of streaming audio or video can stand in for the kind of live exposure that knocks one backward with the full force and physical presence of the new. How fortunate for Northeast Ohioans, then, that the Cathedral of St John the Evangelist invited the Marian Consort to Cleveland as the penultimate stop on their first North American tour. Their concert of music inspired by the Virgin Mary spanned centuries of sacred music in the English choral tradition.

Founded as a sextet, the Consort appeared on Friday, October 19 as a flexible ensemble: founder, director, and countertenor Rory McCleery conducted, and the remaining eight singers split into groups of three or more for each piece.

Tenors Guy Cutting and Edward Ross sang in sweet harmony in Byrd’s Salve Regina, and first alto Helen Charlston’s powerful yet velvety tone lent a distinctive richness to the group sound, as it would all evening.

In her Magnificat for sextet, Roxanna Panufnik’s compositional voice held as much appeal as the literal voices of the singers. The Cathedral’s long echo did the audience a favor by keeping first soprano Charlotte Ashley’s crystalline voice ringing several seconds after the piece ended. Despite the clarity and quality of her sound, Ashley sang with restraint throughout.

McCleery aimed for productive contrast in his program order. Cornysh’s Ave Maria, a low-quartet showcase in which Charlston served as a natural leader, paired well with the sad, beautiful Dormi Jesu for high-voice trio by Dodgson that followed. Octets by Tallis and Tavener gave bass Nick Ashby a chance to lay out warm blankets of sound.

After an intermission, Ross sang the Salve Regina chant unaccompanied from the far end of the space, setting up a breathtaking performance of Howells’s 1915 Salve Regina by the remaining septet. The four men of the group blended well in Parsons’s Ave Maria, with Charlston adding wonderfully resonant commentary above. MacMillan’s Ave Maris Stella, though well sung, paled in comparison to Britten’s A Hymn to the Virgin, for which McCleery placed a quartet singing in Latin thirty feet behind a group singing in English, yet kept the two groups coordinated.

As an encore, the ensemble sang a double-choir Jesu Redemptor setting from Estêvão Lopes Morago, another composer who may not ring a bell for most modern listeners. To judge by the consort’s affecting performance, his should become a household name.

It might seem that there’s not a lot left to discover after three decades of experience with the Red Priest’s charming and evocative score, but this performance boasted a secret weapon: the young Spanish violinist Francisco Fullana, now the Orchestra’s artist-in-residence, whose affecting personality and easy virtuosity raised the solo part a quantum leap above the merely extraordinary. END_OF_DOCUMENT_TOKEN_TO_BE_REPLACED

END_OF_DOCUMENT_TOKEN_TO_BE_REPLACED

The Cleveland Orchestra’s second performance of the new season on Sunday afternoon, October 17 at the newly renamed Mandel Hall at Severance Music Center was just such an occasion. If the ensemble’s return to public concerts under the baton of Franz Welser-Möst wasn’t enough reason to light a bonfire, the Cleveland debut of a new work written for one of the Orchestra’s most popular soloists, and the swan song of one of its longest-serving members added extra fuel to the celebration. END_OF_DOCUMENT_TOKEN_TO_BE_REPLACED