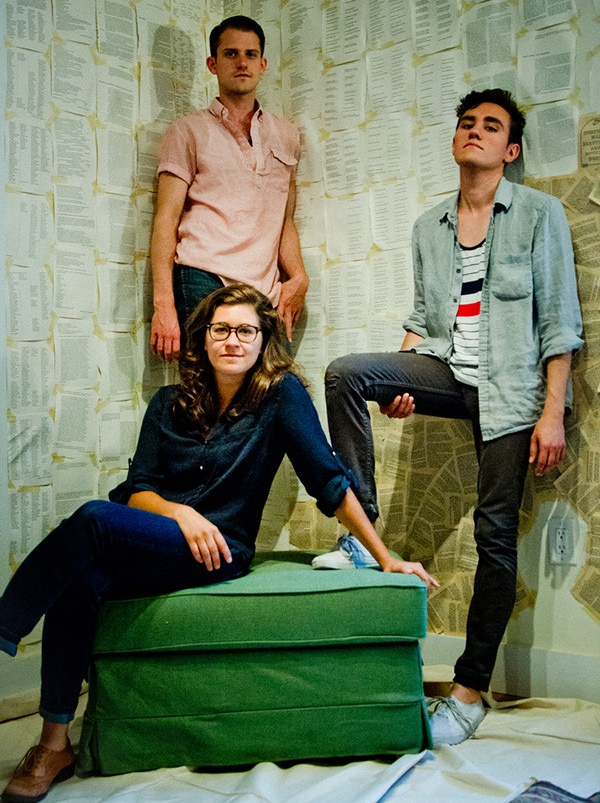 In a concert that could have been titled “The Joy of Hitting Things,” Tigue — cheered on by family and friends — filled the Bop Stop with exuberance as the sun went down on Sunday, June 3. Ohio-born and educated together as undergraduates at Ohio State, Matt Evans, Amy Garapic, and Carson Moody are touring Strange Paradise, their new second album.

Now based in Brooklyn, NY after stints as graduate students at Eastman, the members of Tigue have built a collective identity based on a shared love of minimalism and genre-blending. Although they actively commission outside composers, this gig focused on their own collaborative composition — and one work by Evans. They showed off the clear, formal shapes of their music in powerfully exact performances.

Tigue opened with an untitled piece, which hopefully will appear on a future release. This work began with all three seated at drum sets, Garapic striking a continuous, even rhythm on a metal object, creating a resonant drone. Evans entered by drumming on the rim of his snare, and Moody later added hits on a triangle lying atop a drum. The polyrhythmic texture slowly expanded to include foot-pedaled bass drums.

A second section moved to jangly, then to compressed timbral slides pulsing on slowly opening and closing hi-hats. The most spectacular moment began when the drone moved to floor tom rims, then expanded into a section of visceral drum set elaborations played precisely in unison. After amping up the speed, this intense music stretched into infinity with soft drum rolls.

The rest of the concert was a live rendition of Strange Paradise. Each musician had a main station — Garapic on vibraphone, Moody on drum set, and Evans on synthesizer — but played multiple other instruments along the way. The album pays homage both to drum-focused, electronic-based pop and the music of Steve Reich, especially his Four Organs. The frequent shakers alongside crunchy organ chords were the madeleines setting off remembrances of minimalisms past.

The opening two tracks were played without pause. “Triangle” centers around a dancing musical surface: otherworldly electronic sounds, an expansive rock-organ synth line in 10ths, elaborate drum set playing, and a 4-against-3 beat riding on top. Although it has a dark, psychedelic hue, “Triangle” is happy, celebratory percussioning. This moved into “Contrails,” with a beat-less, underwater aura full of bowed vibraphone. It was spine-tingling.

Evans’ 20-minute “Quilts” is an almost upside-down throwback to Four Organs. Instead of the older work’s focus on organ patterns atop a maraca groove, here Evans uses a synth as the backdrop for elaborate, polyrhythmic patterning on two drum sets. The many musical changes turned on a dime in Stravinskian splices, as a quick cutoff wrapped up the grooving landscape.

Tigue’s joyful music shows off their talents. They handle the complex rhythms with ease, and maintain a clear focus throughout. Hopefully they will return to Cleveland soon.

It might seem that there’s not a lot left to discover after three decades of experience with the Red Priest’s charming and evocative score, but this performance boasted a secret weapon: the young Spanish violinist Francisco Fullana, now the Orchestra’s artist-in-residence, whose affecting personality and easy virtuosity raised the solo part a quantum leap above the merely extraordinary. END_OF_DOCUMENT_TOKEN_TO_BE_REPLACED

END_OF_DOCUMENT_TOKEN_TO_BE_REPLACED

The Cleveland Orchestra’s second performance of the new season on Sunday afternoon, October 17 at the newly renamed Mandel Hall at Severance Music Center was just such an occasion. If the ensemble’s return to public concerts under the baton of Franz Welser-Möst wasn’t enough reason to light a bonfire, the Cleveland debut of a new work written for one of the Orchestra’s most popular soloists, and the swan song of one of its longest-serving members added extra fuel to the celebration. END_OF_DOCUMENT_TOKEN_TO_BE_REPLACED