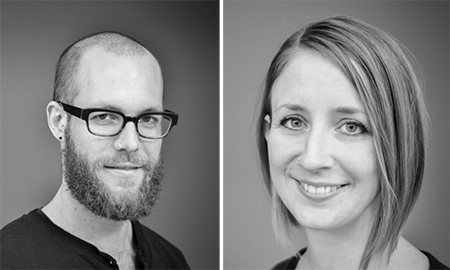 Time Canvas continued its three-part “Home Not Home” concert series on Saturday, July 7 at Historic St. John’s in Ohio City. Meditating on the music of historically displaced people, this second event focused on the tradition of 15th-century Sephardic Jews in Spain before their expulsion in 1492. The 46 songs, played by violinist Chiara Fasani and guitarist Joshua Stauffer, were arranged and dressed up as Aires de Sefarad by the late Jorge Liderman, an Argentine-American composer of Jewish descent.

Born in Buenos Aires, Liderman studied in Jerusalem and Chicago, and taught for many years at the University of California, Berkeley. Most of his music has a vivacious, forward-pushing verve that keeps his modernist choices alive and bears a certain family resemblance to Stravinsky. Aires de Sefarad shares these features, but the old songs drawn from Isaac Levy’s anthology Chants Iudeo-Espagñols give this hour-long set an immediately graspable quality only possible by melding folk melodies with harmonious soundscapes.

In the suite finished in 2004 — four years before his apparent suicide — Liderman focused on making each instrumental song a singular short jewel and then arranged them into a larger musical journey. An organizational marker falls at the halfway point, allowing Time Canvas to take a useful intermission.

Fasani and Stauffer played these melodious, inventive settings with singing conviction. Fasani’s violin was particularly sweet in the upper register and wonderfully throaty on the lowest string. Stauffer drew many pearly tones from his classical guitar and handled the often-contrapuntal writing with ease. The problem in execution was their balance in the Parish Hall. It was superb when Fasani had the tune, but when Stauffer had the melody, his softer instrument was often overpowered by an active violin accompaniment.

Distinguishing between 46 short songs with the same basic structure — a folk-tune melody with an active accompaniment after some kind of striking introduction — was extremely difficult. After nine of them, the evening blurred together, even if you carefully kept track of each evocatively-titled song.

That said, a few memorable ones stood out from the flow. The extremely flamboyant “Avre este abajour” (Open your window) was full of grandeur and Time Canvas played it to the hilt. “Una tadre fesquita de Mayo” (A cool afternoon in May) is a beautiful arrangement, almost like Gounod’s Ave Maria strung over Bach’s first Well Tempered Clavier prelude. And “Diziocho años tento” (I am eighteen years old) was cheekily cute as Fasani gripped and strummed her violin like a second guitar.

Overall, the concert fit well into Time Canvas’s “Home Not Home” theme by exploring an old song tradition. Lidermann’s work was beautiful and made for a pleasant listening experience. Their third concert on August 11, “Hip-Hop & Minimalism,” should be fascinating.

END_OF_DOCUMENT_TOKEN_TO_BE_REPLACED

What was that strange din coming over the live feed from Ludwig Recital Hall on Friday evening, July 23, as the Miami String Quartet filed onstage to play the third faculty recital of the Kent Blossom Music Festival? Accustomed as we were during the pandemic ban on live audiences to hearing the sound of no hands clapping, it was both startling and thrilling to witness a large crowd putting their hands together to welcome one of the Festival’s perennial favorites back for an in-person performance. END_OF_DOCUMENT_TOKEN_TO_BE_REPLACED

Practical reasons aside, there aren’t many ensembles who can put together an all-Mozart evening as elegantly as The Cleveland Orchestra. END_OF_DOCUMENT_TOKEN_TO_BE_REPLACED