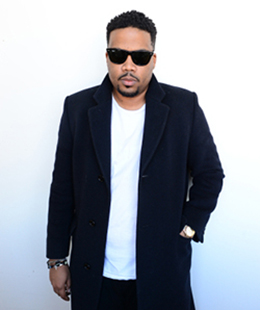 With the power out in Ohio City around W 25th St and Detroit Ave on Saturday night, August 11, Time Canvas gave a fascinatingly engaging — and unexpectedly unplugged and candlelit — final concert in their three-part Home Not Home series. Titled “Hip Hop and Minimalism,” this program at Historic St. John’s focused on the Black American experience represented by local emcee and mental health advocate Archie Green. The main project of the night was mashups: using classic minimalist music by four composers as the backing tracks for Green’s eloquent rapping of righteous, warranted indignation.

As noted by both Green and Time Canvas executive director Joshua Stauffer, these tangential musics have few direct connections. Minimalism grew out of the avant-garde scene of downtown Manhattan in the ‘60s, while hip hop began in house parties in the Bronx projects a decade later. Through post-war technology, the separate innovations of both phasing tape loops and endless turntable breakbeats helped create musical styles built from relentless repetition. So stapling Green’s rapping to minimalist mainstays made aural sense and felt impressively natural. The goal was to give Green the floor to speak truth and give voice. The results were powerful and memorable even without the obligatory electricity and microphones.

The power went out at the end of the pre-show soundcheck, so Stauffer’s electric guitar stayed in its case in favor of acoustic. He and violinist and artistic director Chiara Fasani Stauffer were joined by two guests: double bassist Joel Negus and percussionist Luke Rinderknecht. Throughout six minimalisms and two Green originals, these four instrumentalists — and as needed, a small, tinny bluetooth speaker — filled the resonant Parish Hall with the precise sounds of evocative arpeggios, sumptuous long tones, and spunky repeated notes. Even without a mic, Green successfully boomed above the din.

As the sunset light slowly became darkness, Green dug deeper and deeper into the systemic injustice of our society with a selected group of eight songs in the conscious hip hop mode. Among them, U Wouldn’t Understand took shots at meme culture in the satirical guise of trap. Good Morning America — here over pastoral minimalist warbling — played with images of the coding of black men as terrorists, while also celebrating Spike Lee. Over Stauffer’s sweet acoustic guitar, the moving Blacks Only railed at cops who “keep killing us ‘cause they don’t understand.” In the longest and most memorable stretch, Suspicious told of Trayvon Martin and once again a lack of understanding, then pivoted to a memorial of names. He ended this heart-rending ritual kneeling in prayer, and upon standing intoning Black Lives Matter with fist raised.

Written in celebration of Chance the Rapper’s Grammy wins last year, the final song turned to another of Green’s main topics: black excellence. Green and Time Canvas gave a scintillating, improvisatory rendition including audience backbeat snaps and the only sung hook of the evening. Tonight, Time Canvas and Archie Green created a singular experience in this historical stop on the Underground Railroad that was only enhanced by the reliance on candles and flashlights.

Based on recent events, its new designation might well be “Chamber Music Way” in honor of the fine performances that are taking place this month at Gilmour Academy in Gates Mills and The Grove Amphitheatre in Mayfield, courtesy of ENCORE Chamber Music Institute and ChamberFest Cleveland, respectively. In addition to the distinction of presenting some of the first in-person performances to come onto the calendar since the pandemic, both organizations were making their debuts in new venues. END_OF_DOCUMENT_TOKEN_TO_BE_REPLACED

On Sunday, June 6, Cleveland piano fans got an opportunity to hear Kohlberg himself in a short solo recital that formed the coda to Music From The Western Reserve’s online concert series. END_OF_DOCUMENT_TOKEN_TO_BE_REPLACED

END_OF_DOCUMENT_TOKEN_TO_BE_REPLACED

This year the majority of the concerts are being held at a single location, the magnificent Grove Amphitheatre in Mayfield. Although the venue has no permanent seating, lawn chairs and blankets are the perfect solution. Picnics are encouraged and the responsible consumption of alcohol is permitted. Think Blossom Music Center on a smaller scale and you’ll get the picture. END_OF_DOCUMENT_TOKEN_TO_BE_REPLACED

The series opener, “Legends,” celebrated the return of in-person concerts with music by Antonín Dvořák, Enrique Granados, Paul Wiancko, and Franz Schubert. The musicians displayed the wide range of expression and color, enchanting communication, and technical brilliance that chamber music can provide. END_OF_DOCUMENT_TOKEN_TO_BE_REPLACED

Music director Franz Welser-Möst set the stage in his introductory video remarks, describing the Berg era as “the ‘Roaring 20s’ aftershock of World War I, a blooming of musical styles never experienced before or since.” END_OF_DOCUMENT_TOKEN_TO_BE_REPLACED