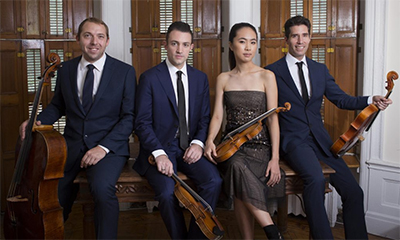 Rare, even precious, are the occasions when classical-concert organizers and the ensembles they welcome give substantial new pieces the space to thrive alongside beloved classics. Tuesday Musical, however, presents Northeast Ohioans with just this sort of experience on a semi-regular basis. When the Escher Quartet came to Akron on Thursday, March 28, a bold new thirty-minute composition more than held its own alongside works by Mozart and Beethoven.

The piece in question came from 31-year-old composer Chris Rogerson, who was in attendance at E.J. Thomas Hall for the second-ever performance — and east-of-the-Mississippi premiere — of his String Quartet No. 4. In hindsight, Mozart’s Quartet in F, K. 590 felt like a spring salad before two far heavier courses: Rogerson’s piece and Beethoven’s Quartet in c-sharp, Op. 131.

Mozart’s first movement exuded a seasonally appropriate eagerness in the hands of the Escher. Slithering scales felt like self-conscious retreats from this headlong rush. Fortunately for violist Pierre Lapointe, Mozart gave his instrument no shortage of exposed lines, and fortunately for Mozart, Lapointe played these with a capacious sound. The second movement was darkly regal, played as though at the edge of tears. The third opened with a collective sound meek enough to make subsequent moments of violence sound like extreme points of contrast, and the fourth juxtaposed muted joy with matter-of-fact assertiveness.

Rogerson introduced his piece by acknowledging, among other inspirations, the model of Beethoven’s late quartets. The comparison fits, what with the piece’s unique structure and audacious sound palette, but this young composer’s ability to lace large-scale musical forms with moments of allure and surprise recalls Mahler. The Quartet includes too many description-defying high points to list, but the 15-minute first movement — the more aggressive of the two by far — presented both dissonance-haloed opening sonorities and chocolatey Romanticism within its first three minutes alone. A sudden change in pulse at one point, which arose from a suspense-building collective glissando, seemed to shift the very air. Cellist Brook Speltz, restrained in the Mozart, cut loose in exposed moments here. Second violinist Danbi Um stole the spotlight for a while, with fierce lines bowed near the instrument’s bridge.

Rogerson attributes the meditative feel of the second movement to a long hiking trip he took in Afghanistan. The simple, quiet exchanges between Um and Lapointe in the first several minutes of the movement came across as mantra-like, the willing of peace into existence. Gentle disruptions of this stillness, first manifested as out-of-scale notes from first violinist Adam Barnett-Hart, foretold shrieks and clashes later. Multiple attempts to resolve this conflict ended in a final rustling, so soft as to resemble a fadeout.

Beethoven’s late quartet seemed a grave elder sibling next to the Rogerson, rather than an imposing ancestor. Speltz’s tone seemed to float free from his instrument on multiple occasions. A terrible certainty hung over the first movement, and even the bright crisp second movement saw moments of darkness bleeding through. Um and Barnett-Hart played with an opera singer’s expressiveness in the fleeting third. Classical poise and dignity marked the opening of the fourth, before the wandering-off that defines so much of Beethoven’s music from this period. Enthusiasm pervaded the fifth movement, loveliness the sixth. For the finale, the Escher focused on the one quality that could properly close such a monumental program: sheer intensity.

END_OF_DOCUMENT_TOKEN_TO_BE_REPLACED

Supported by engagingly, yet simple staging by Cara Consilvio, a well-prepared cast of singers told the archetypal story of Cinderella with charm and flair. Framing the production was  a sparse but colorful set and wonderful lighting by Dave Brooks. END_OF_DOCUMENT_TOKEN_TO_BE_REPLACED