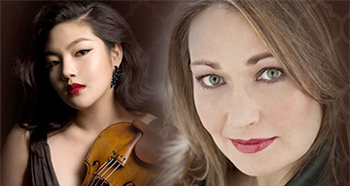 For over 60 years Akron’s Tuesday Musical Association has supported gifted students who are embarking on careers in music education and music performance through its annual Scholarship Competition.

On Tuesday, November 22 at 7:30 pm in Akron’s E.J. Thomas Hall, two scholarship winners who have gone on to have international careers will return to the Tuesday Musical stage for a concert titled We Knew Them When. Soprano Dina Kuznetsova and violinist Jinjoo Cho will be joined by pianist Hyun Soo Kim for performances of works by Britten, Mozart, Schubert, Rachmaninoff, and Tchaikovsky. University of Akron music professor Brooks Toliver will give a pre-concert talk at 6:30 pm.

Since winning her scholarship in 1996, Dina Kuznetsova went on to attend the Ryan Opera Center at Chicago’s Lyric Opera. She has performed in many of the world’s greatest opera houses including the Metropolitan Opera, Royal Opera House, Berlin’s Staatsoper, Wiener Staatsoper, The Bolshoi Theatre, San Francisco Opera, and Lyric Opera of Chicago.

After winning scholarships in 2012 and 2014, Jinjoo Cho went on to win the Gold Medal at the Ninth Quadrennial International Violin Competition of Indianapolis, and made her solo debut at Carnegie Hall this past June. This season she has concerto engagements with Orquesta Clasica Santa Cecilia de Madrid, Deutsche Radio Philharmonie, and the North Carolina, Richmond, and Santa Fe symphonies.

During telephone conversations earlier this week, both musicians agreed that winning their Tuesday Musical scholarships played a vital role in helping them to make the leap into the world of professional music. “When you’re starting out, you hope you’ll be able to make it. In the meantime there are no guarantees, and very little money, so any kind of belief that people have in you — and financial support — is tremendously helpful,” Kuznetsova said.

“Both times I won I was at a critical time of my life,” Cho said. “I wanted to play solo concerts, but between those, what do you do to make money? In this way, I think the Tuesday Musical scholarships offer critical help to musicians who are chasing their dreams. I know that’s true for so many of the talented young students in the area who have won them.”

Regarding their program, the musicians noted that since the concert falls on Benjamin Britten’s birthday, including some of his music was a must. Kuznetsova will sing Three Songs from The Poet’s Echo and Cho will play the Suite for Violin and Piano, Op. 6. The evening will also include Mozart’s aria “L’amero, saro costante” from Il Re Pastore, Schubert’s Violin Sonata in A, D. 574, Dvořák’s Gypsy Songs, Op. 55, Tchaikovsky’s songs Frenzied Nights, and Rachmaninoff’s Do not sing, o beauty, Op. 4, No. 4.

Born in Seoul, Korea, Jinjoo Cho moved to Cleveland at the age of 14 to study in the Young Artist Program at the Cleveland Institute of Music, where she went on to earn her bachelor’s, master’s and professional studies degrees. “When I was going to school I really didn’t feel like I had Cleveland or Northeast Ohio pride, but since I have graduated I feel very attached to the community. Musically, it has such a great support system, and Tuesday Musical is a big part of that,” Cho said. “TMA is such a closely-knit group of people who are dedicated to what they do, and I respect them so much for the nurturing that they give to young artists.”

Cho herself has now become part of the area’s musical support system. She is the founder of ENCORE Chamber Music, a festival and institute that was inaugurated this past summer. Additionally, she serves on the faculty of the Oberlin Conservatory and the Cleveland Institute of Music.

Dina Kuznetsova also benefited from that Northeast Ohio support network. Born in Moscow, she began studying piano at an early age. Later, at the encouragement of an aunt, Kuznetsova decided to audition for schools in the States because she felt they would provide more opportunities to experiment with other genres of music.

“I auditioned at Oberlin and was accepted. I started as a piano major but was also doing vocal accompanying. I tried many things and thought I would become a theatre director, but then I realized how much I loved singing,” she recalled. “During my third year, Dr. Mary Schiller came to the Conservatory, and I started taking voice lessons with her. She believed in me and we took it from there — so it was quite a miracle.”

Kuznetsova then followed Schiller to the University of Akron where she earned her master’s. “At that time I was working at the University as an accompanist, because I could get a work visa while I was studying. I decided to make Akron my base in order to hone my craft until I could move on to the big singing programs. Everything that the area has given me has been extremely important.” She continues to make Akron her home.