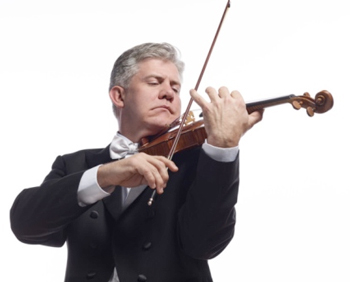 When Cleveland Orchestra first assistant principal second violin Eli Matthews performs Paganini’s Violin Concerto No. 1 this weekend, he will be revisiting a work that has been an important part of his life since he was seven years old. “When I was a wee child my mother took me to the symphony in Memphis, where I grew up, to hear Eugene Fodor play Paganini’s First Violin Concerto,” Matthews recalled during a telephone conversation. “After hearing it, I asked her to get me a violin and she did. From the time I first picked up the instrument, playing that was a big goal of mine and I did many times when I was a teenager — I won some competitions with it, and I’ve played it with orchestras.”

On Saturday, July 22 at 7:00 pm at Blossom Music Center, Charles Latshaw will lead the Kent/Blossom Chamber Orchestra in performances of Vaughan Williams’ The Running Set and Mendelssohn’s Symphony No. 4 (“Italian”). At 8:00 pm Jahja Ling will conduct The Cleveland Orchestra in a program that will include Rossini’s Overture to The Barber of Seville and Paganini’s Violin Concerto No. 1. Following intermission Ling will conduct both Orchestras in a side-by-side performance of Dvořák’s Symphony No. 9 (“From the New World”). Tickets available online.

Matthews said that performing the Concerto with Cleveland has been on the top of his list for a long time. And he noted that Saturday’s performance aligns with the 200th anniversary of Paganini’s writing it. “He began working on it during the summer of 1817. I’m not in the anniversary-obsessed crowd, but there are those who enjoy that sort of thing.”

Matthews, who joined the Orchestra’s first violin section in 1997 before assuming his present position in 2008, said that he’s never lost his love for Paganini’s Concerto. And although the work is not often performed these days, that wasn’t always the case. “If you go back to the 1960s and into the ‘70s, especially when Lorin Maazel was Music Director, this Concerto appeared on the Orchestra’s subscription series quite often several years in a row.”

The violinist said that he has some “unproven theories” as to why the Concerto is not programmed as often as it once was. One is that what he called “fun, show-off music” is not in fashion. For the second, he began by quoting Eugène Ysaÿe about Paganini’s music. “‘It’s not that it’s impossible, but it requires an enormous commitment and time.’ It doesn’t matter how good you are, you have to spend time with it. And I think that maybe the busy schedules of today’s soloists make it a huge challenge to carry the piece around.”

Matthews, who studied with Dorothy DeLay at the University of Cincinnati College-Conservatory of Music, said that as a violinist, “Everything begins and ends with Paganini, and because of him there was that next generation of violinist/composers like Wieniawski and Vieuxtemps. And Joachim may not have had the techniques he showed Brahms when the composer wrote his violin concerto. All of this came from Paganini. Most of us continue to learn from him 200 years later.”

As a young violinist Matthews admitted that he was taken by the rock-star status the public bestowed on Paganini. “From him and up through Jascha Heifetz, those guys did live that kind of life. They made a lot of money and partied too much, and that all sounds like a lot of fun when you’re ten or twelve years old. And Paganini was such an incredible, self-promoter with the misbehaving and the rumors that came out of that. We’re going to assume that he did not sell his soul to the devil. But people are still talking about that, so it shows just how big that personality was.”

Regarding the Concerto’s instrumentation, Matthews said that no one knows for certain what the orchestra parts were like when Paganini toured with the work. “I think they were probably very simple. But Paganini had become good friends with Berlioz, and had heard Symphonie fantastique, so when Paganini stopped touring he began adding parts for trombones, horns, and drums into the score. And what you’ll hear at Blossom, at least the orchestra part, is not anything like somebody would have heard when Paganini was touring.”

Wrapping up our conversation, Matthews shared a quote from Berlioz about Paganini. “‘He was who he was because he was, and not because of any who came before him.’ Berlioz always had a way with words, and I love that quote.”

END_OF_DOCUMENT_TOKEN_TO_BE_REPLACED

Supported by engagingly, yet simple staging by Cara Consilvio, a well-prepared cast of singers told the archetypal story of Cinderella with charm and flair. Framing the production was  a sparse but colorful set and wonderful lighting by Dave Brooks. END_OF_DOCUMENT_TOKEN_TO_BE_REPLACED