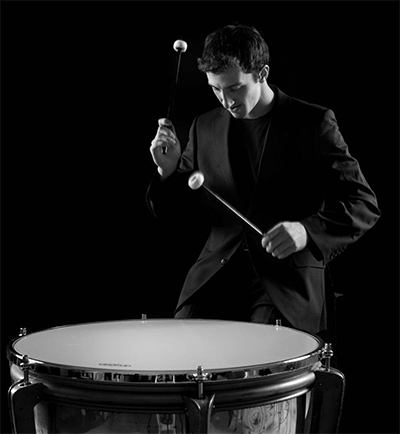 As principal timpanist of the Calgary Philharmonic, Alexander Cohen is accustomed to playing music that has specified pitches. That changed when his sister Diana suggested that he perform Péter Eötvös’ Thunder for solo timpani at this year’s ChamberFest. “This is a very different piece than I am used to playing,” Cohen said during a telephone conversation. “When I first saw it I didn’t even think it was a piece for timpani. At first I balked at the suggestion, but learning it has been a lot of fun.”

On Tuesday, June 25 at 7:30 in CIM’s Mixon Hall, you can hear Cohen perform Eötvös’ intriguing work. The program will also include Liszt’s Orpheus arranged for piano trio by Saint-Saéns, selections from Brahms’ Hungarian Dances, and Erno Dohnányi’s Piano Sextet. Tickets are available online.

Thunder is a single movement from the composer’s larger work Triangel for percussion and ensemble. Scored for a single drum, the graphically-notated piece involves rhythmic patterns played while constantly pedaling. Although the pitch is continually changing, no specific pitch is indicated.

Cohen said that a typical set of timpani consists of four or five drums, the smallest being 20 inches in diameter and the largest 31 or 32 inches in diameter. How did he decide which drum to use? “The title is Thunder for solo bass timpani, so I grabbed the 32-inch because that was the largest drum I had access to.”

Timpani have pedal mechanisms that the player uses to adjust the pitch. In Thunder, Eötvös uses the single drum as an unpitched percussion instrument, while continually varying the tone. “If I were to tell a composer how to write a timpani piece I would be coming at it from a timpanist’s perspective — thinking about the instrument’s role in the orchestra and using orchestral techniques. With this piece, it’s almost as though he looked at music for other percussion instruments and employed those techniques, while also exploiting the options that the pedal mechanism provides.”

The piece calls for some unusual techniques. “Usually, when we strike the timpani we let the stick bounce off quickly because the longer the stick stays on the drumhead, the less resonant the sound is — and in the orchestra, you want the sound to be as resonant as possible. But Eötvös writes dead strokes, where you strike the drum and leave the stick on the head — you don’t let it bounce off. He also has you playing on the rim.”

Thunder includes a cadenza which gives the performer the opportunity to add creativity to the mix. “I’m using some techniques that he didn’t write in the rest of the piece, like cutting a superball in half and attaching it to a stick — when you rub it against the drum head it produces a moaning sound.”

Eötvös’ graphic notation is on the simple side — just the standard staff with the middle three lines removed. “The gestures are indicated within that. So I’m looking at a gesture that is notated visually, and then figuring out what part of the pitch range that gesture should be in — you just tinker around and figure out where it fits best. He also writes a lot of glissando.”

The timpanist said the biggest hurdle to learning the piece was freeing himself from the constraints of what is typical. “Musicians are wired to fit within the chromatic grid of pitches. Just using the pedal and not thinking of half steps and whole steps is unusual, and at first it was challenging. You have to open your mind to sounds, colors, and techniques that the constraints of an orchestra don’t allow you to explore. It can be fun if you can free yourself from the orchestral attitude.”

Cohen said that he looks forward to performing the piece at ChamberFest. “There will be some surprises for the audience, but it’s going to be a fun exploration.”

END_OF_DOCUMENT_TOKEN_TO_BE_REPLACED

The portents weren’t good for the week of March 8: first the disorienting switch to Daylight time was to click in on Sunday, then a full moon would rise on Tuesday, then the 13th of the month was scheduled to fall on Friday. Midweek, the spread of COVID-19 added a spiraling series of postponements, cancellations, and shut-downs to an already unlucky period. Like other educational institutions, Oberlin College and Conservatory found themselves making decisions about how to proceed, only to change plans several times. END_OF_DOCUMENT_TOKEN_TO_BE_REPLACED

That old saw about absence making the heart grow fonder: how true it feels now! With concerts canceled to prevent the kinds of confined massing that facilitates the spread of COVID-19, musicians are suffering. Critics have already filed reports on the grim uncanniness of clear schedules and empty halls. Just before this writer’s exile from the scene, however, a spark of life shot skyward, and now stands as a last memory of live performance before social distancing. END_OF_DOCUMENT_TOKEN_TO_BE_REPLACED

The Cleveland Chamber Music Society sailed into relatively uncharted waters on March 3, hosting the Bay Area male vocal ensemble Chanticleer in “Trade Winds.” This musical voyage took its name from a triptych by Zhou Tian, part of a varied program that called in at multiple ports for Italian madrigals, settings of Ave Maris stella (“Hail Mary, Star of the Sea”), an Edwardian part song, a Portuguese Mass, songs from the Pacific, and English sea shanties. END_OF_DOCUMENT_TOKEN_TO_BE_REPLACED