For the concert on April 29, 17 area high school students joined the group’s 90 regular members and a chamber orchestra to perform two musical farewells to life: one familiar, the other new. First came Mozart’s Requiem, in the standard completion by Süssmayr, followed by the world premiere of Dewdrops, a piece by three-time Tony Award Nominee and Lakewood native Dave Malloy.

In the concrete-walled Magnificat Center for the Performing Arts, individual voices and instrumental parts stood out. However, the ensemble’s sheer size ensured more than adequate blend in passages for full choir, such as the latter part of the opening Introit. The chamber orchestra tore into the iconic Sequence (“Dies irae, dies illa…”) with fierce energy. When the solo quartet stepped out during the “Tuba mirum,” bass Eric Richardson faltered for a moment but found his groove. Tenor David McCullum and mezzo-soprano Kristen Jones-Schmittigen sang gamely, but could have projected somewhat more, while soprano Debra Chelko brought confidence and great tone to her solo line.

Throughout the Sequence, timpanist Andrew Pongracz supplied a warm, beating pulse at the perfect volume. Chorale Director John Drotleff, a veteran of 34 years at the helm of the ensemble, held his players and singers together, although orchestra members occasionally seemed to miss his grander gestures. Tuning and coordination slipped a bit among the violins in the Sanctus and Agnus Dei, but the final Communion glowed, as it should. 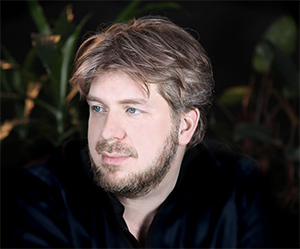 Clocking in at around 15 minutes, Dewdrops covers substantial thematic and poetic ground — even compared with the 50-minute Requiem. The roots of the composition extend back to the early 1990s, when Malloy sang Mozart’s unfinished masterpiece as a teenager with the Chorale under Drotleff. Nearly 25 years later, the ensemble commissioned a modern-day response to the Requiem from Malloy, who was by then interested in the ideas and spiritual practices of Buddhism.

Dewdrops sets texts by nineteen Japanese poets as well as Malloy himself. It remixes the refrain of an iconic poem by Dylan Thomas — “Do not go gentle into that good night” becomes “I will go gently.” The first movement opens with a clever blending of muted trombones and clarinets, with the singers chanting in unison only to split into dissonance and slide into harmony. The second movement gives the trumpet and trombone players, so patient throughout the Requiem, a chance to shine — and shine they did, along with the bassoons.

The highlight of the performance arrived partway through Dewdrops, when choral melodies, timpani patterns, and ever-brightening harmonies converged to form a sort of miniature Baroque-pop song. Its gentle swaying, along with texts both mundane and cosmic, made for an oddly satisfying conclusion. The luminous setting of the word “Amen” left a grateful audience ready to say the same to a visibly thrilled Malloy.

Franz Schmidt’s Symphony No. 4 showcased the ensemble, under guest conductor Jonathan Berman, in the standard conventions of a not-so-standard piece. But at the start of the program, the musicians were equal partners to pianist Cédric Tiberghien, whose playing could be as bold as the full orchestra or as intimate as any instrumental solo. END_OF_DOCUMENT_TOKEN_TO_BE_REPLACED

END_OF_DOCUMENT_TOKEN_TO_BE_REPLACED

Jackson began the program with a recitation of Langston Hughes’ poem “Helen Keller” — the first of five poems by Hughes that served as interludes between each piece on the first half. END_OF_DOCUMENT_TOKEN_TO_BE_REPLACED

Pianos with pins and tape on strings, a bass drum and tam tam, crotales, Almglocken, and vibes. Microphones were hooked up all around the instruments. The feed was sent to speakers around the room. Lighting designer Nicholas Houfek hung incandescent globes over the arrangement of instruments from thin black wires stretching across the beams. END_OF_DOCUMENT_TOKEN_TO_BE_REPLACED

From the podium, Elim Chan set an ambitious tone for the evening. The rising star conductor, here in her Cleveland Orchestra debut, has a commanding style, and every twist and turn in Saturday’s performance tracked closely with her baton. END_OF_DOCUMENT_TOKEN_TO_BE_REPLACED