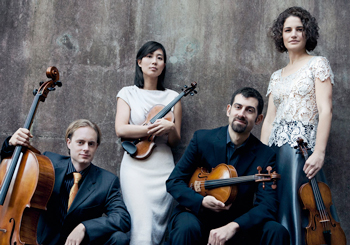 “It is a pleasure to be performing back in Northeast Ohio,” said Chiara String quartet first violinist Rebecca Fischer in a recent phone conversation. Fischer spent several years of her youth living in Oberlin and immersed herself in the Cleveland Orchestra Youth Orchestra as well as other musical endeavors. On Sunday, December 11 at 3:00 pm, the Wooster Chamber Music Series will present the Chiara String Quartet at Gault Recital Hall in Scheide Music Center.

The Chiara String Quartet — Rebecca Fischer and Hyeyung Julie Yoon, violins, Jonah Sirota, viola, and Gregory Beaver, cello — trained as a quartet at the Juilliard School and have won numerous accolades, including the ASCAP/Chamber Music America Award for Adventurous Programming and First Prize at the Fischoff Chamber Music Competition. The quartet has performed at Lincoln Center’s Alice Tully Hall, Carnegie Hall, Philadelphia’s Kimmel Center, and the National Gallery in Washington DC. They are currently in residence at the University of Nebraska-Lincoln, and have been in residence at Harvard University and the Metropolitan Museum of Art.

Featured on the program is Mendelssohn’s Quartet in D, Op. 44 No. 1, Jefferson Friedman’s Quartet No. 2, and Beethoven’s Quartet in B-flat, Op. 133, with the Groß Fuge finale. “When you play string quartets, you have this unbelievable privilege of picking from many hundreds of years of great repertoire,” Fischer said. “The Beethoven is a huge, monumental work, and the Große Fuge is 18 minutes long,  and a huge thing to listen to, so we wanted to pair it with two shorter works. Concertgoers want to hear variety.”

The Chiara have become known for their impressive tradition of performing from memory, a feat that is both challenging and unconventional for string quartets. “We started memorizing right after we re-recorded an album of the three Brahms Quartets,” Fischer said. “We felt that our initial recording a few years before wasn’t as open, free, and spontaneous as it could be, so we decided to re-record the entire set. We were trying to find ways to have more spontaneity in our music making and make it feel more alive, so we started putting aside the music and memorizing small portions of it, just for fun and as a rehearsal technique. We found that it was very rewarding for us and helped us to communicate more with each other onstage. We ended up recording the entire Brahms cycle without music, calling the recording ‘Brahms by Heart.’”

The violinist said that eventually they decided to perform from memory during performance. “We started slowly adding a piece from memory per program. Even now we’re not always able to play every piece on a program from memory, but we try to because it helps us to be more open both with each other and with the audience.”

Fischer said that she and her quartet colleagues are analytical people and memorizing the score puts that section of their brains to work. “Getting to know each other’s parts is naturally taken care of through that process, and then we’re able to be freer in our expression.”

The Chiara Quartet is devoted to audience engagement and looks forward to the excitement this repertoire inspires. “One of the fascinating things about pairing the Große Fugue and Friedman quartet, with its new and exciting language, is  realizing how avant-garde the Beethoven still sounds. That’s something that is fascinating for both audiences and for me as a performer.We’ve been playing the Beethoven with the Grosse Fugue frequently this fall, and have been spending a lot of time after concerts talking to audience members. We encourage everyone to come back and talk to us, as we love to hear people’s feedback and reactions.”

The Cleveland Orchestra — or at least half of it — marked Valentine’s Day with a straight-through, 50-minute concert led by Belgian early music guru Philippe Herreweghe. The February 14 performance, marketed as a romantic evening of orchestral classics, played to a packed house (marketing works!). END_OF_DOCUMENT_TOKEN_TO_BE_REPLACED

Music is said to be a universal language, but it does speak with different accents. When you’re playing music by Jean Sibelius, it’s helpful to have a Finnish conductor on the podium, which is what made Susanna Mälkki’s pair of Cleveland Orchestra concerts so lucid and communicative earlier this month. END_OF_DOCUMENT_TOKEN_TO_BE_REPLACED

END_OF_DOCUMENT_TOKEN_TO_BE_REPLACED

Today’s touring string quartets hew to so uniformly high a standard that it’s often little individual touches that make ensembles stand out. The Polish musicians who make up the Apollon Musagète Quartet showed up at Plymouth Church in Shaker Heights for their debut on the Cleveland Chamber Music Society series on February 4 in matching plaid suits and black shirts. And jettisoning their jackets, they played standing (except for the cellist). END_OF_DOCUMENT_TOKEN_TO_BE_REPLACED