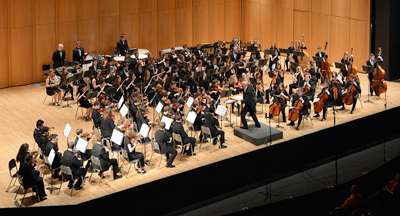 George Beelen, Youngstown State University Emeritus Professor and founder of the Ohio Cultural Alliance, helped introduce the concert with a short talk titled “Our Diverse Roots,” summarizing the many cultural groups who built the community. The predominant musical source was Slavic music, amounting to four of the seven works performed. The cleverly chosen program enlivened the Symphony’s birthday celebration.

Bedřich Smetana’s colorfully impressionistic The Moldau, the second of six tone poems from Má vlast, received a gorgeous performance in the hands of conductor Randall Fleischer and the Symphony. The music depicts the course of the famous river (Vltava in Czech) that starts as two small springs, joins into a single current, and becomes the large river that passes by Prague’s renowned Vyšehrad, or High Castle, seat of the earliest Czech kings.

The Symphony’s fine woodwinds began the work with gently swirling flutes, succeeded by more powerful clarinets and, ultimately, the string section and harp. The main “River Theme” enters against the moving current. It is a folk song that has taken several nationalistic forms, including a Swedish version, and the Rumanian one that served as the model for the Israeli national anthem.

The trumpets and horns beautifully depicted a rustic “Farmer’s Wedding” celebration. The “Moonlight Dance of the Mermaids” provided more delicate textures portraying nocturnal serenity, and led to visions of moonlit rocks, castles, and ancient ruins. Excitement built in the “Rapids,” when powerful brasses and percussion seemed to create a storm over the river.

The “River Theme” returns, leading to the more grandiloquent Vyšehrad scene. A quiet serenity ensues, except for the powerful, Beethoven-like final two-chord cadence. Ample percussion, including timpani, cymbals, and bass drum, lent power to the performance. An especially charming off-the-beat accented version of the river theme provided another lively highlight.

Antonín Dvořák’s Slavonic Dance, Op. 46, No. 1 was a delight. The first of the two sets of dances is a perennial audience favorite because of its breakneck pace and lovely orchestration. The woodwinds, particularly the oboes, played beautifully. The performance made the most of the composer’s intricate syncopated rhythms and the mixtures of 3/4 and 6/8 meters.

The Symphony’s performance of Alexander Borodin’s Polovtsian Dances was excellent. Fast and flashy tutti sections alternated with beautiful solos in oboe and English horn on the famous plaintive melody (which would later become “Strangers in Paradise” in the musical Kismet). Other lovely moments included a dashing clarinet solo, graceful flute obbligatos, and exotic moods created by tambourine rolls and other Janissary percussion.

Pyotr Ilyich Tchaikovsky’s Suite No. 4 in G, Mozartiana was an attempt by the composer to familiarize Russian audiences with Mozart’s music. The piece is a transcription of several Mozart keyboard works and all four movements received fine performances. By using harp and extensive percussion the composer made his orchestrations modern by late 19th-century standards. The fourth movement, a setting of Mozart’s Variations on a Theme of Gluck, K. 455, was stunningly attractive. An entire variation is devoted to solos for the concertmaster, and Rachel Stegeman played with power and great expression. The principal clarinet was also given several enchanting solos.

Alexander Glazunov arranged Chopin’s Polonaise militaire in A, Op. 40, No. 1, for orchestra, and pianist/composer Anton Rubinstein called the work the symbol of Polish glory. Glazunov’s orchestration sparkles with fine brass writing, and the performance was outstanding.

END_OF_DOCUMENT_TOKEN_TO_BE_REPLACED

Rodgers & Hammerstein’s Cinderella was originally produced for television in 1957 — seven years after the animated Disney film was released — and starred Julie Andrews. According to the Rodgers & Hammerstein website, it was viewed by over 100 million people. END_OF_DOCUMENT_TOKEN_TO_BE_REPLACED

The story line has its origin in an 1855 play and an 1842 farce that Thornton Wilder mined for his 1938 play The Merchant of Yonkers. When that turned out to be a flop, in 1954 Wilder made the crucial decision to re-center the show around the character of the legendary marriage broker Dolly Gallagher Levi and renamed it The Matchmaker. END_OF_DOCUMENT_TOKEN_TO_BE_REPLACED

The Dodero Center for the Performing Arts at the Gilmore Academy in Gates Mills is one feature of an impressive campus. The auditorium is shallow, the stage is deep, and the ensemble played without a shell. Throughout the program, the sound, especially in instruments’ lower registers, tended to disappear. END_OF_DOCUMENT_TOKEN_TO_BE_REPLACED