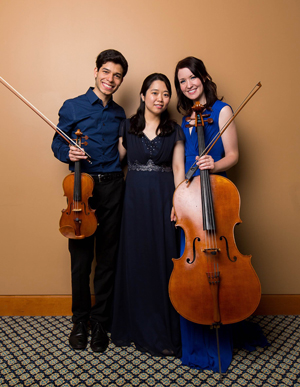 Since its founding in 1973, the Fischoff National Chamber Music Competition — the largest chamber music competition in the world — has helped launch the careers of many notable chamber music ensembles. Alumni and past winners with ties to Northeast Ohio include the Aeolus Quartet, Cavani Quartet, eighth blackbird, Imani Winds, Jasper Quartet, Jupiter Quartet, Miami String Quartet, Miro Quartet, Pacifica Quartet, and Prima Trio. Most recently, the Omer Quartet, representing the Cleveland Institute of Music, won the senior division string and grand prizes in 2013.

The 42nd annual Fischoff competition took place from May 8 through 10 at the DeBartolo Performing Arts Center on the campus of Notre Dame University in South Bend Indiana. When all was said and done, CIM’s Autana Trio, Yuri Noh, violin, Ruben Rengel, viola, and Anna Bowman, cello, was awarded the Bronze Medal and a $2,000 cash prize in the Senior String Division.

Interviewed in a sun-filled studio at CIM shortly after the competition, the still-excited Autana Trio members quickly credited their success to Sharon Robinson, Kathryn Brown, and Anita Pontremoli, their mentors in CIM’s Advanced Piano Trio program. “Our three coaches are all so different,” Yuri Noh said. “Sharon is a string player and the other two are pianists, one solo and the other collaborative, and that gives us different perspectives about the music. We also get to work with guest artists, who bring even more ideas into the mix.” All three members agree that this is a well-balanced approach to learning. “I think this approach also helps us in finding our own voices,” Anna Bowman added. “We’re exposed to so many wonderful ideas, but we still need to decide for ourselves what we think.”

For their competition repertoire, Bowman said they chose two pieces that they really love. “In the fall of 2014 we decided that we really wanted to learn Mendelssohn’s d-minor trio. Later in December, we began to talk about entering some competitions, so, along with our coaches, we decided that the Shostakovich e-minor trio might be a good addition to our repertoire as a competition piece.” They all agree that the two pieces contrast nicely with each other.

I asked the Trio to talk about the daily activities at the Fischoff. “Twelve groups were chosen to go to the Competition, so we arrived as quarter-finalists,” Bowman noted. “After we checked in, they provided a rehearsal space. The quarter-final rounds were the next day. Although they offered us a rehearsal space again, we ended up wanting to practice individually. They were very kind and provided us with two more practice spaces.”

That day, the Trio was the last group scheduled to play during the evening session, and although a dress rehearsal/warm-up room was provided, they all agreed that waiting around all day caused some anxiety.

“Also, what we played for the quarter-final was not our decision,” Rengel pointed out. “They let us know what they wanted to hear about 30 minutes before we had to play our 20-minute program.” As it turned out, the jury listened to the second, third, and almost all of the fourth movements of the Shostakovich. The Trio admitted to being “pretty stressed” after their performance. “It didn’t go exactly the way we wanted it to,” Bowman said, “so advancing to the semi-finals was a relief and a very nice surprise.”

Six ensembles were chosen to advance to the semi-final round, which also consisted of a 20-minute program. They agreed that this round was a more pleasant experience. “The jury announced the three finalists at a joint meeting of the contestants from all of the divisions,” Rengel said. “That was a little more exciting than looking online to find out who did advance.”

Given that three ensembles were advanced to the final round and three prizes would be awarded, barring a disaster, the Trio was now assured of becoming a medalist. Then the unexpected occurred. “During the climax of the final movement of the Shostakovich there are about two-minutes worth of fortissimo markings,” Rengel recalled. “I was playing very high on the E-string when suddenly it broke. That moment was pretty stressful, but we couldn’t stop, so I had to play some of the music an octave lower on the A-string. Later I was told that the judges were looking at each other trying to decide if they should stop us or not, but we just kept playing. There wasn’t anything else we could do. It was very strange to be playing with the E-string just hanging there.” Rengel and his colleagues all agreed that although they were in the final few minutes of the piece when the string broke, it felt like five years had gone by before they were able to finish.

The Trio could not be happier with the outcome of the Fischoff, and they agreed that it was an extremely positive experience from beginning to end. “Winning a competition isn’t going to make us famous or immediately provide us with a concert career,” Yuri Noh said, “But participating in a competition does help us to develop ourselves as musicians.”

Anna Bowman put everything in perspective: “Even though we were competing against other ensembles, all of the contestants were so supportive. I think it’s important to have the right mind-set going into a competition. It’s not about going out there to win, but rather about playing your heart out and sharing your music with the audience, but most of all, having fun as a group.”

The Trio also had many wonderful things to say about the administration and staff members of the Fischoff. “Everything was so well organized, which is not always the case with competitions,” Noh said. “They really did care about us, and the staff was so helpful. It was just a great environment to be in.”

END_OF_DOCUMENT_TOKEN_TO_BE_REPLACED

The strings-only work by Berg has made relatively frequent appearances on the Orchestra’s programs. In 2021, the musicians recorded it for the In Focus series, and it appeared again on last year’s European tour. Friday’s rendition maintained the group’s characteristic light and effortless playing, each section blending as much as possible to echo the work’s original form as a string quartet. At fifteen minutes total, the piece is quite short, but the dense encoded musical meanings require some extra-attentive listening. Splitting up the three movements ensured that each one could be appreciated on its own. END_OF_DOCUMENT_TOKEN_TO_BE_REPLACED