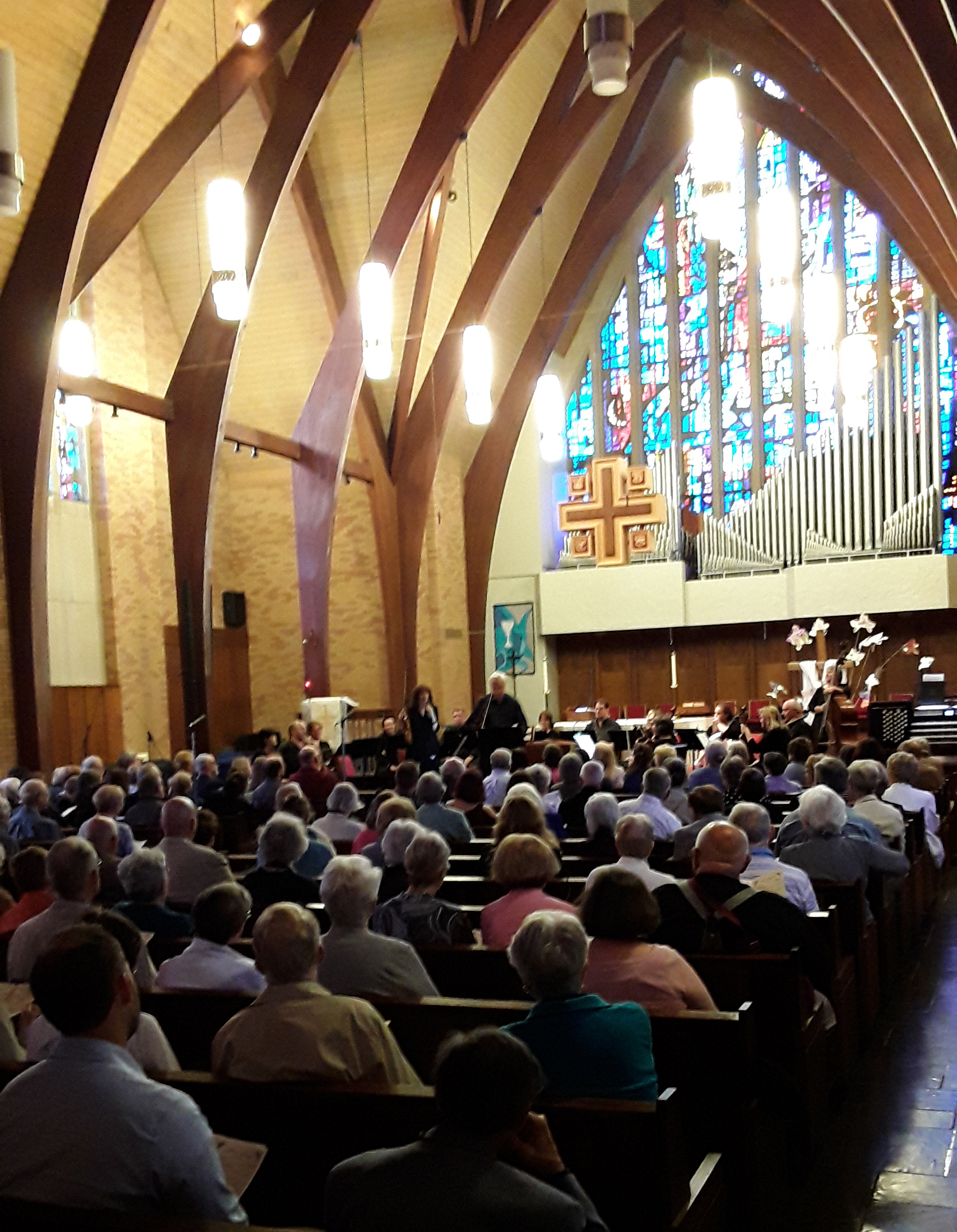 The seventeen members of Akron Baroque delivered a charming program of music inspired by the natural world on Sunday afternoon, June 2 in Faith Lutheran Church in Fairlawn. The pews were packed on the first truly lovely afternoon of spring as Alan Bodman led the ensemble from his concertmaster’s chair in well-known music by Handel, Vivaldi, and J.S. Bach, lesser-known works by Rameau and Martín y Soler, and never-before-heard pieces by Amy Barlowe. Major solo contributions came from Bodman, organist Robert Mollard, and soprano Susan Wallin.

Jean-Philippe Rameau’s Concerts Sextuor No. 6 opened the program with a first-movement nod to nature in the form of a hen (“La Poule”) whose pecking was cleverly depicted in the violins. Less topical but delightful were the menuets, “L’Enharmonique” and “L’Egyptienne,” that followed.

Alan Bodman both led and soloed in Vivaldi’s “Spring” concerto, in addition to giving verbal program notes that related the composer’s musical effects to phrases in the descriptive sonnets (maybe written by Vivaldi). Ensemble was admirably tight as the strings painted the vernal scenes with relaxed exuberance.

Robert Mollard gave a brief demonstration of the Schantz organ’s ability to imitate the songs of the cuckoo and the nightingale that Handel embedded in his F-major Organ Concerto. Part of the organ is located at the far end of the church, allowing long-distance conversation among the birds. Mollard chose sparkling but subtle registrations that blended well with the strings and oboes but still sounded like solo lines. The instrument features an electronic harpsichord register that he put to good use. (Handel himself played from a chamber organ with a built-in set of plucked strings, allowing him to act as both soloist and continuo player.) 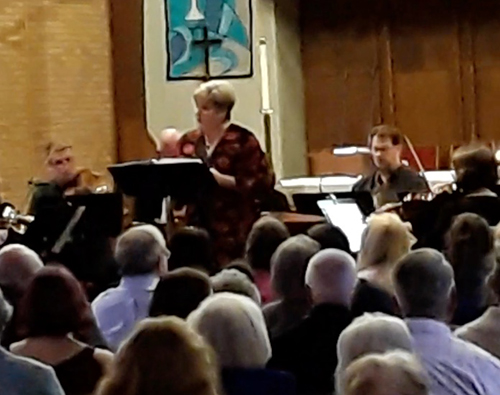 A Spanish contemporary of Mozart, Vicente Martín y Soler was known as a composer of opera buffa. His aria “Sereno Raggio” from L’arbore di Diana, which promises blissful calm and a delighted heart, was engagingly delivered by Susan Wallin. An orchestration was provided by Akron Baroque violinist David Kempers — an enterprising solution to the unavailability of orchestra parts (Bodman noted that otherwise the ensemble would have had to purchase materials for the whole opera).

Amy Barlowe gave some background about her setting of Wendell Berry’s The Peace of Wild Things, then illustrated some details in the score with Wallin’s assistance. The passacaglia-like piece, receiving its first performance on Sunday, lasts under four minutes, but treats the poet’s words about finding peace and grace in nature with clarity and sensitivity. It ends on a surprising, ecstatic high note which Wallin let ring out for a long moment in the lively acoustic of the nave.

Barlowe’s second compositional contribution was a new second movement for Bach’s Third Brandenburg Concerto. (The manuscript for the movement includes only two chords.) Lazy performers dutifully play them and go on, but more creative souls improvise slow movements of various lengths — or adapt other Bach movements to fill the void. Amy Barlowe has crafted a Siciliano for solo violin that worked nicely as a bridge between two energetic movements in G Major, and Alan Bodman gave it a convincing debut on Sunday.

Bach’s own movements were crisply played by the strings of Akron Baroque, who don’t make equipment changes to play Baroque music, but do a good job putting the material across on modern instruments — while making a nod to some historical techniques.

Jackson began the program with a recitation of Langston Hughes’ poem “Helen Keller” — the first of five poems by Hughes that served as interludes between each piece on the first half. END_OF_DOCUMENT_TOKEN_TO_BE_REPLACED

Pianos with pins and tape on strings, a bass drum and tam tam, crotales, Almglocken, and vibes. Microphones were hooked up all around the instruments. The feed was sent to speakers around the room. Lighting designer Nicholas Houfek hung incandescent globes over the arrangement of instruments from thin black wires stretching across the beams. END_OF_DOCUMENT_TOKEN_TO_BE_REPLACED

From the podium, Elim Chan set an ambitious tone for the evening. The rising star conductor, here in her Cleveland Orchestra debut, has a commanding style, and every twist and turn in Saturday’s performance tracked closely with her baton. END_OF_DOCUMENT_TOKEN_TO_BE_REPLACED