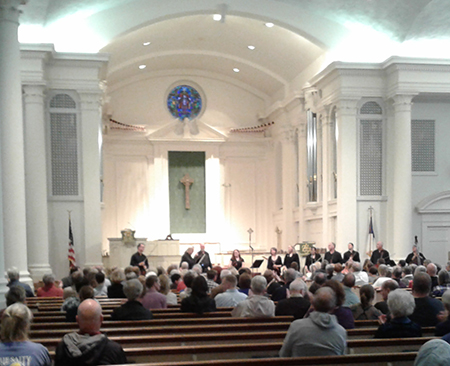 Sunny 18th-century music — some of it inspired by Nature, which was busy drenching Akron Baroque attendees on their way to Westminster Presbyterian Church — worked its magic on Sunday afternoon, September 9. The 13-member, modern instrument ensemble led by concertmaster Alan Bodman joined a fine roster of soloists in spirited performances of music by Vivaldi, Telemann, and Handel that would have lifted the most dampened spirits.

The most exuberant contributions to Sunday’s program came from soprano Susan Wallin, who opened the afternoon with Vivaldi’s Alleluia, a short burst of sheer, melismatic energy, and brought the event to a thrilling conclusion with Handel’s “Let the Bright Seraphim” from Samson in collaboration with flawless trumpeter Scott Johnston. Setting a brisk tempo, Wallin sang with bright, alluring tone, making easy work of Handel’s coloratura. She preceded “Seraphim” with a sensitive performance of Handel’s lyrical “Where’er you Walk” from Semele. 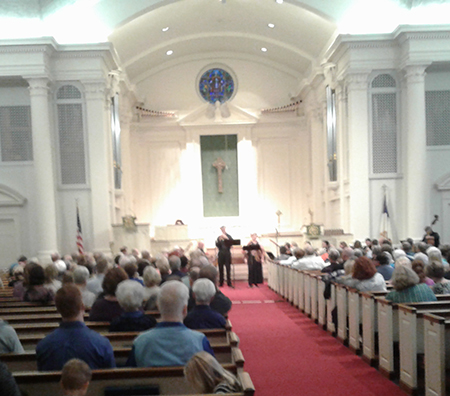 Johnston was also note-perfect in his own arrangement of Handel’s Suite in D, a piece assembled during the composer’s lifetime, but not by his own hand. Popularly known back in the day as “Handel’s Water Piece” because some of its movements originated in a famous royal excursion on the Thames, it provided Bodman — who served as emcee as well as leader-conductor — with one of several opportunities to quip about the repertoire, this time relating the music to the deluge outside. (Noting that Scott and Linda Johnston will soon be relocating after years in Akron, Bodman invoked another allusion to Nature in dubbing this concert “their swan song.”)

After the strings’ vivacious performance of Vivaldi’s Sinfonia in C, the remaining works in the first half of the program featured soloists from Akron Baroque’s second violin section, “but these women play second fiddle to no one,” Bodman said.

Sarah Husak took on the task of both leading and soloing in Vivaldi’s “Autumn,” the Concerto in F from The Four Seasons. The programmatic piece — which evokes drunken (and later drowsing) peasants at harvest time and the thrill of a hunt (except on the part of the beast being pursued) — is full of tricky transitions. Those might have benefitted from a bit more rehearsal time, but Husak played with verve and style, and the performance made a good impression.

Akron Baroque appeared as the first offering this season on the church’s Five at Five series, initiated by longtime music director James Mismas, who has retired and passed the torch on to another Oberlin alumnus, Alcee Chriss III. It’s excellent to see the tradition continue. The barrel-vaulted sanctuary is very kind to music — and doesn’t need the sound enhancement that was in use on Sunday.

Jackson began the program with a recitation of Langston Hughes’ poem “Helen Keller” — the first of five poems by Hughes that served as interludes between each piece on the first half. END_OF_DOCUMENT_TOKEN_TO_BE_REPLACED

Pianos with pins and tape on strings, a bass drum and tam tam, crotales, Almglocken, and vibes. Microphones were hooked up all around the instruments. The feed was sent to speakers around the room. Lighting designer Nicholas Houfek hung incandescent globes over the arrangement of instruments from thin black wires stretching across the beams. END_OF_DOCUMENT_TOKEN_TO_BE_REPLACED

From the podium, Elim Chan set an ambitious tone for the evening. The rising star conductor, here in her Cleveland Orchestra debut, has a commanding style, and every twist and turn in Saturday’s performance tracked closely with her baton. END_OF_DOCUMENT_TOKEN_TO_BE_REPLACED