How did the planets align so that Johann Sebastian Bach, George Frideric Handel, and Domenico Scarlatti — three of the most eminent and prolific composers of the Baroque period — all came to be born in the same year? That defies explanation, but it makes for interesting concert programming. On Sunday, March 11 at 4:00 pm at Faith Lutheran Church in Fairlawn, Akron Baroque will raise a glass to “The Class of 1685” with a free concert devoted to music by these three luminaries.

The performance will include J.S. Bach’s Harpsichord Concerto in f featuring Robert Mollard, Scarlatti’s Keyboard Sonata in G in an arrangement for orchestra by Amy Barlowe, and Handel’s Concerti Grossi in F and G from his Op. 6. We spoke with concertmaster Alan Bodman to ask how Akron Baroque narrowed down their choice of repertoire for Sunday’s concert.

“We were pretty sure we wanted to do a Handel concerto grosso, so we listened to all of the Op. 6 pieces and really liked No. 1 in G.” Bodman said. “They’re so imaginative, and offer a lot of variety in their movements. We needed something very lively and upbeat to conclude the program, and No. 9 stood out for us.”

Because the Handel pieces use a concertino trio of two violins and cello and a ripieno string orchestra, several soloists can be featured. “I’m sitting concertmaster and will play the first solo part,” Bodman said, “but Linda Johnston and Amy Glick, who share the principal second violin stand in the Akron Symphony, will each take a turn on the second solo part. Our two cellists, Christina Rosser and Greg Fiocca, will also share the solo parts.”

In developing the program, Bodman sent out an email to all the players asking what they’d be interested in performing. “Bob Mollard, our keyboardist, got right back suggesting a harpsichord concerto, so we’ll be playing the Bach f-minor concerto — the one with the famous Arioso slow movement.”

It turns out that Mollard will be a bit more involved than just playing the solo part. “Bob is putting the finishing touches on an instrument he got from longtime Akron Symphony violist Keith Holliday that sounded great but needed some work,” Bodman said. “Bob is something of a Renaissance Man, and very mechanically inclined — he’s famous worldwide for the conducting batons he makes. The new harpsichord should project much better than the one that’s already in the church.”

Mollard, who serves as organist and choir director at Faith Lutheran, Akron Baroque’s new performing venue, has also helped solve a logistical problem there. “Our old space at First Congregational had great ambiance, but we struggled to hear each other,” Bodman said. “The acoustics are much better at Faith Lutheran, but it was difficult for the audience to see us. So Bob built platforms to raise the players up.” 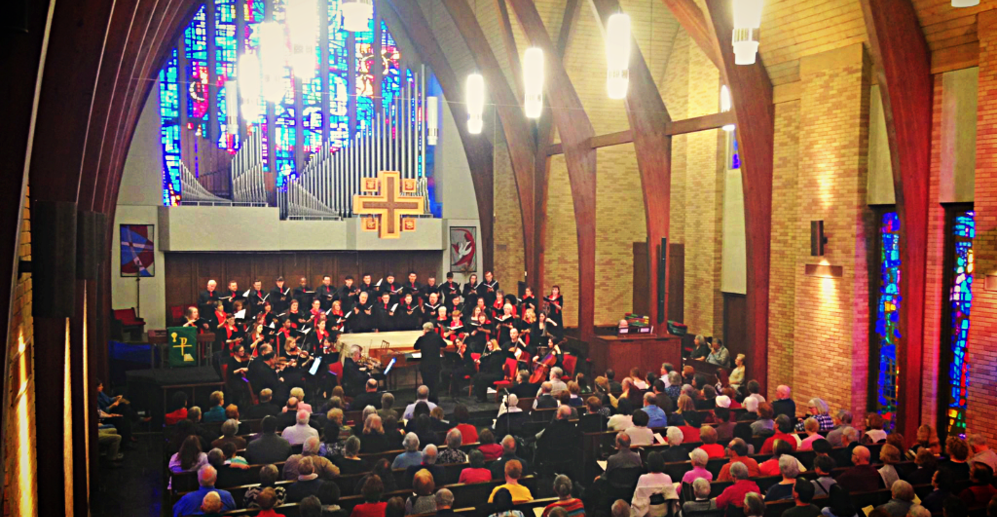 Involving Domenico Scarlatti’s music in the 1685 project posed a conundrum because he mostly wrote keyboard music. Akron Baroque founder and violinist Amy Barlowe had an idea about that. In an email, she wrote,

A while ago, when I was teaching at Willamette University in Oregon, I heard an excellent harpsichordist play the G Major Sonata, K. 391. I thought, ‘If I were reincarnated as a harpsichordist, I’d really want to play that piece because it’s so energetic and full of life!’ I arranged the sonata for violin and viola, and Alan and I enjoyed playing it on several occasions for very enthusiastic audiences. Then Akron Baroque’s 1685 theme popped up, and it was a little more challenging than we’d somehow expected to find pieces by Domenico Scarlatti that he’d written for the resources we have available for our first concert.

Domenico wrote about 555 keyboard sonatas. Most are in binary (AB) form, and many reflect his Spanish background and have guitar-like figurations. Having had the little G Major sonata in my head for so long, I wondered if I could make it work in another new incarnation, this time for strings and harpsichord. I guess we’ll be finding that out in our first rehearsal, but it I think it’s going to be pretty cute and lots of fun to play!

Unlike other ensembles who devote themselves to early music, Akron Baroque, which mostly draws on players from the Akron Symphony, happily performs on modern instruments. “It’s a real chamber group,” Alan Bodman said. “The whole feeling is one of camaraderie. Everybody has a voice and finds something to contribute in rehearsals, and there’s a lot of laughter.”

Bodman, who retired as concertmaster of the Akron Symphony three years ago, and more recently retired from the University of Akron, is enjoying spending more time on Akron Baroque. “It takes a lot of organizing — fundraising, publicity, programming, marking parts. And although the community has been really generous, and we’ve had support from KeyBank, we haven’t received any grants at all this season. It costs between $5,000 and $6,000 in salaries for each concert.”

Akron Baroque will play its second and final concert of the season on June 3. Next season will include a performance on Westminster Presbyterian’s Five@Five Series, and the orchestra has plans for a collaboration with Samuel Gordon’s Singers Companye. “We have a lot of fun making music together,” Bodman said. “We hope we can keep it going.”

Jackson began the program with a recitation of Langston Hughes’ poem “Helen Keller” — the first of five poems by Hughes that served as interludes between each piece on the first half. END_OF_DOCUMENT_TOKEN_TO_BE_REPLACED

Pianos with pins and tape on strings, a bass drum and tam tam, crotales, Almglocken, and vibes. Microphones were hooked up all around the instruments. The feed was sent to speakers around the room. Lighting designer Nicholas Houfek hung incandescent globes over the arrangement of instruments from thin black wires stretching across the beams. END_OF_DOCUMENT_TOKEN_TO_BE_REPLACED

From the podium, Elim Chan set an ambitious tone for the evening. The rising star conductor, here in her Cleveland Orchestra debut, has a commanding style, and every twist and turn in Saturday’s performance tracked closely with her baton. END_OF_DOCUMENT_TOKEN_TO_BE_REPLACED