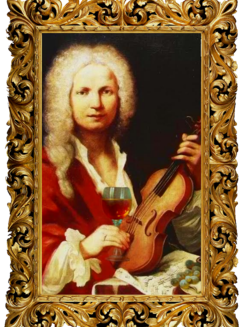 Bodman starred in a particularly memorable rendition of “Summer” from Vivaldi’s The Four Seasons, an early example of program music for which the composer included descriptive poems, sometimes attributed to himself.

The opening poem describes the burning sun of a hot summer day, birds singing, and the expectation of a rain shower. The music alternates between languid sections depicting the sweltering heat and animated sections representing the impending storm. The remaining two movements continue the descriptive music, the third using rapidly descending scale passages to convey the downpour. The Akron Baroque strings were excellent, and Bodman tossed off his difficult solo passages with panache.

Faith Lutheran’s organist and music director Robert Mollard was soloist in Handel’s Organ Concerto in F, Op. 4, No. 5. He chose effective registrations on the church’s modern instrument for the opening movements and the delicate alla Siciliana that followed, and produced antiphonal effects in the final Presto using divisions of the organ in front and back of the sanctuary.

Oboist Thomas Moore was scintillating in Alessandro Marcello’s Oboe Concerto in c, producing a dark, attractive sound especially in the gorgeous, long phrases of the opening Allegro. His intense appoggiaturas enlivened the Adagio with its slow, pulsating accompaniment, and Handel provided some colorful modulations in the final Allegro.

Vivaldi string concertos bookended the first half of the program. The sequences of the g-minor concerto, RV 152, sparkled and the strings produced a beautiful sound. Charming echo effects in the Andante lead to a fugue in the finale. The G-major concerto, “alla rustica,” RV 151, is one of the best-known of the composer’s 45 string concertos. The opening, triple-meter Presto alternates tutti passages with unisons. Mollard, at the harpsichord, played some lively solos in the Adagio, and the strings played the short closing Allegro, full of repeating motives, with gusto.

END_OF_DOCUMENT_TOKEN_TO_BE_REPLACED

Rodgers & Hammerstein’s Cinderella was originally produced for television in 1957 — seven years after the animated Disney film was released — and starred Julie Andrews. According to the Rodgers & Hammerstein website, it was viewed by over 100 million people. END_OF_DOCUMENT_TOKEN_TO_BE_REPLACED

The story line has its origin in an 1855 play and an 1842 farce that Thornton Wilder mined for his 1938 play The Merchant of Yonkers. When that turned out to be a flop, in 1954 Wilder made the crucial decision to re-center the show around the character of the legendary marriage broker Dolly Gallagher Levi and renamed it The Matchmaker. END_OF_DOCUMENT_TOKEN_TO_BE_REPLACED

The Dodero Center for the Performing Arts at the Gilmore Academy in Gates Mills is one feature of an impressive campus. The auditorium is shallow, the stage is deep, and the ensemble played without a shell. Throughout the program, the sound, especially in instruments’ lower registers, tended to disappear. END_OF_DOCUMENT_TOKEN_TO_BE_REPLACED