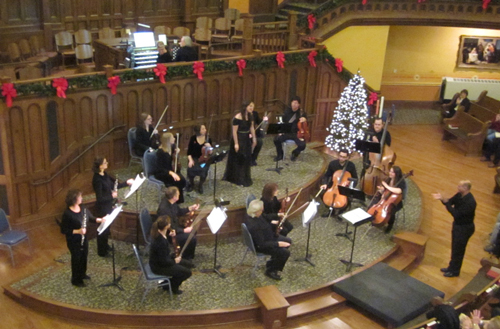 It’s difficult to say what falls more charmingly on the ear at this time of year — Italian baroque Christmas concerti or concerted French Noëls. Under the direction of music director Guy Victor Bordo, Akron Baroque gave its audience a taste of both on Thursday evening at First Congregational Church, plus three arias by the equally alluring soprano, Madeline Apple Healey.

Those Italian and French forms are both based on folk music. The Italian repertoire invokes the music of the Zampognari or bagpipe players, originally shepherds who came down from the hills at Christmastime. The French music gives a Parisian gloss to provincial carols that everyone knew and could whistle to themselves whether in urban streets or country lanes (Francophones still do!)

Giuseppi Sammartini’s Concerto grosso, op. 5, no. 6 and Giuseppi Torelli’s Concerto Grosso op. 8, no. 6, both in g minor, opened and closed this excellent program. The Sammartini began with sharp rhythms in the first movement, advanced to a grazioso middle movement and ended with a standard Pastorale over a bagpipe-like drone that surprised with some interesting harmonic turns and a gentle ending. The Torelli began solemnly before turning festive. Its Largo featured expressive rests and solo lines, and its final Vivace brought the concert to a thrilling close. Akron Baroque swapped players around for the two pieces, revealing the depth of talent in the 12-player string ensemble.

Lalande’s and Charpentier’s arrangements painted the lily just enough to let the original tunes shine through while still adding a layer of sophistication. The titles of the nine Charpentier carols were printed out only in English, which made it something of a game — especially for organists who know them in keyboard settings — to match them up with their French titles. 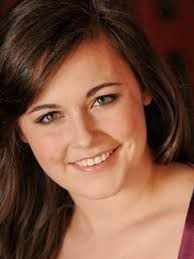 Midway through the first half of the program, Madeline Apple Healey was featured in a soprano version of “Schlafe, mein Liebster” from Johann Sebastian Bach’s Christmas Oratorio, retrofitted from its original in the secular cantata BWV 213. Adding another sophisticated form of a folksy tradition to the evening’s mix, this lovely cradle song gave Healey’s clear, supple voice lyrical, undulating lines, graceful melismas, and the opportunity for a brief, stylish cadenza.

Later in the program, Healey returned for dashing performances of back-to-back Handel arias, this time allowing her to show off her brilliant passagework and vocal technique. Both pieces would have been better served by slightly more deliberate tempos. “Rejoice greatly” from Messiah was fast, but “O had I Jubal’s Lyre” from Joshua flew by in a blur, giving the soprano little time to articulate the text.

Though Akron Baroque makes no attempt to abandon its modern instruments, the ensemble’s sensitivity to the repertoire and its intelligent leadership produces winningly elegant performances. Two more programs are planned during the orchestra’s eighth season: on Sunday, February 1 at Westminster Presbyterian Church (part of the 5@5 series) and on Thursday, May 14 at First Congregational. All concerts are free.

END_OF_DOCUMENT_TOKEN_TO_BE_REPLACED

Rodgers & Hammerstein’s Cinderella was originally produced for television in 1957 — seven years after the animated Disney film was released — and starred Julie Andrews. According to the Rodgers & Hammerstein website, it was viewed by over 100 million people. END_OF_DOCUMENT_TOKEN_TO_BE_REPLACED

The story line has its origin in an 1855 play and an 1842 farce that Thornton Wilder mined for his 1938 play The Merchant of Yonkers. When that turned out to be a flop, in 1954 Wilder made the crucial decision to re-center the show around the character of the legendary marriage broker Dolly Gallagher Levi and renamed it The Matchmaker. END_OF_DOCUMENT_TOKEN_TO_BE_REPLACED

The Dodero Center for the Performing Arts at the Gilmore Academy in Gates Mills is one feature of an impressive campus. The auditorium is shallow, the stage is deep, and the ensemble played without a shell. Throughout the program, the sound, especially in instruments’ lower registers, tended to disappear. END_OF_DOCUMENT_TOKEN_TO_BE_REPLACED