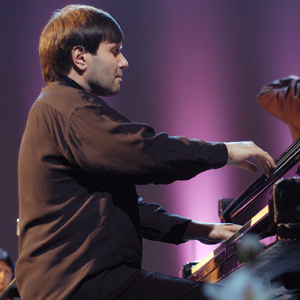 Note: this concert has been cancelled due to the severe weather forecast. There are certain pieces of music that, no matter when they were written, always sound new. And in the eyes and ears of Alexander Korsantia, Prokofiev’s Piano Concerto No. 3 is one that holds that distinction. “It is an eternally fun concerto,” the pianist said during a recent interview. “It was written almost one hundred years ago but it still feels like it is aiming to the future.”

On Saturday, January 19 at 8:00 pm in E.J. Thomas Hall, the Georgian-born pianist will perform that concerto with the Akron Symphony under the direction of guest conductor Benjamin Zander. The all-Russian program will also include Glinka’s Overture to Ruslan and Lyudmila and Tchaikovsky’s Symphony No. 4. Tickets are available online.

Like several of the composer’s works, Korsantia said this concerto has an elegant, older feel to it. “Somehow, more than many other composers, he is able to embrace the full value of those older ‘parents.’ It’s something that as a performer and music lover, I appreciate more and more as time goes by.”

The pianist noted that Prokofiev was also adept at writing variations. “It’s like he had so many ideas and wanted to show all of them, but it is not an aggressive pushing of them. This is a harmonious and wholesome piece, and that’s why it became so popular.”

Although Korsantia has performed the concerto with Benjamin Zander, Saturday’s performance will be his Akron Symphony debut. “It’s a lot of fun for the orchestra. I think it’s one of the most virtuosic orchestral parts in the piano concerto repertoire. It is extremely elaborate and is written very well but requires true virtuosity from everybody.”

During the current season, Korsantia will also perform Prokofiev’s Concerto No. 3 with the Boston Philharmonic and the Xiamen Philharmonic. He’ll take on Rachmaninoff’s Third with the Israel Symphony, Prokofiev’s Second with the Stuttgarter Philharmoniker and Telavi Festival in Georgia, Beethoven’s Fourth with the Israel Philharmonic, and Chopin’s Second with the Jerusalem Symphony and the Ingolstadt Chamber Orchestra. In recital, he will perform in Taipei (Taiwan), Washington D.C., Blaibach (Germany), and Lodz (Poland), as well as making an extensive recital tour in Israel and Georgia.

“The more time goes by, the less I feel like labeling myself as a performer of this style or that style,” he said. “There is so much incredible music written throughout history. And as pianists, we have such luxury of enjoying probably the biggest number of masterpieces written for us, just because the keyboard is such a universal and amazing invention.”

In May, Korsantia will collaborate with A Far Cry chamber orchestra in Galina Ustvolskaya’s Piano Concerto, performing in Boston and Tbilisi, Georgia. “She was a prodigy during her time as a musician and a cultural figure. She was uncompromising and unwilling to go along with anything political or anything not having to do with music,” the pianist said.

“This was during Stalin’s rule and there were very few, if any, people so fearless to express their thoughts so honestly — without being afraid of being executed or being sent away to the camp. She was a student of Shostakovich — he not only admired her talent but thought that he was learning more from her than she was from him. You don’t find beauty in her music, her only agenda is to shoot out the call to the sky — that we are here, and listen to us.”

Korsantia especially looks forward to playing the Ustvolskaya Concerto with the young members of A Far Cry. “They don’t make me feel old because they are so nice — they are one of the most remarkable musical groups in the world. They are true musicians and not superficial in any way.”

When he’s not touring, Korsantia serves on the faculty at the New England Conservatory. How does he go about teaching young people to think outside the box? “It’s a big part of my work, though that doesn’t mean I am against conservative views about older music. But I think that every spiritual quest, including a musical one, should start from the beginning, and all the stages should be understood.”

Speaking philosophically, the pianist said that music is just like life. “Music is made to create a full experience, and our lives are not only about beauty — there is the angelic and the demonic. Sometimes it’s very uncomfortable, sometimes it’s blissful. If you’re just looking for a lighter experience, it’s much better to just focus on the beauty and enjoy the upper layer, but music is capable of so much more.”

END_OF_DOCUMENT_TOKEN_TO_BE_REPLACED

Rodgers & Hammerstein’s Cinderella was originally produced for television in 1957 — seven years after the animated Disney film was released — and starred Julie Andrews. According to the Rodgers & Hammerstein website, it was viewed by over 100 million people. END_OF_DOCUMENT_TOKEN_TO_BE_REPLACED

The story line has its origin in an 1855 play and an 1842 farce that Thornton Wilder mined for his 1938 play The Merchant of Yonkers. When that turned out to be a flop, in 1954 Wilder made the crucial decision to re-center the show around the character of the legendary marriage broker Dolly Gallagher Levi and renamed it The Matchmaker. END_OF_DOCUMENT_TOKEN_TO_BE_REPLACED

The Dodero Center for the Performing Arts at the Gilmore Academy in Gates Mills is one feature of an impressive campus. The auditorium is shallow, the stage is deep, and the ensemble played without a shell. Throughout the program, the sound, especially in instruments’ lower registers, tended to disappear. END_OF_DOCUMENT_TOKEN_TO_BE_REPLACED