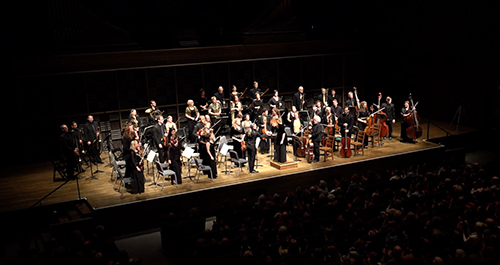 Jeannette Sorrell and her intrepid orchestra Apollo’s Fire performed Friday evening, October 12, in a somewhat unusual venue — for them — Gartner Auditorium at the Cleveland Museum of Art, in somewhat unusual repertoire — again, for them — Mozart and Haydn. After listening for years to Apollo’s Fire in churches around Northeast Ohio, I had a bit of cognitive dissonance being in a real concert hall with relatively drier acoustics and seats rather than pews. Apollo’s Fire certainly performs in concert halls elsewhere in the United States and internationally, but it seemed on Friday that the group had not yet fully settled into the ambience of Gartner Auditorium.

The program opened with the overture to Mozart’s opera buffa La finta semplice (“The Fake Innocent”), written in 1768 when he was 12 years old. The opera itself is seldom performed, but the charming overture in three sections is heard occasionally in concert. Composed only a dozen years after the death of J.S. Bach, it seems a natural for Apollo’s Fire. The primary sonic innovations are the more prominent use of horns, flutes, oboes, and bassoons.

After an opening Allegro, a slower middle section features huge melodic leaps in the strings from low-to-high register. The third section is a tarantella, that perpetual motion Italian dance. Apollo’s Fire played the overture with charm and sparkling precision.

Mozart’s Symphony No. 40 is one of the pillars of Classical-era orchestral repertoire, and in taking it on, Apollo’s Fire set itself up for inevitable comparison with countless other live and recorded readings. The ensemble played with a delicacy and unity of sound unmatched by modern-instrument orchestras, even when reduced to chamber-size. But, especially in the first movement, the phrasing of the main theme’s upward leaps seemed overemphasized and self-conscious.

Similar over-phrasing affected the Andante, although the later drama of the movement increased tension and included beautifully-played duets between flute and oboe. The short-long rhythms were exacting and helped build to a dramatic grand pause before the closing repetition of earlier music.

Haydn was represented by the opening Allegro from his Concertante in B-flat, Hob. I/105. The outstanding soloists were Susanna Perry Gilmore, violin, Debra Nagy, oboe, Stephanie Corbin, bassoon, and Ezra Seltzer, cello. The solo parts were virtuosic, and Sorrell managed the balances well between soloists and orchestra. Although relatively brief, this was for me the highlight of the concert, showing the musicians of Apollo’s Fire musicians at their best.

The concert ended with a five-movement suite of “Baroque” dances from Mozart’s Idomeneo, written in 1781 and first performed in Munich. Full of da capo arias, opera seria (“serious opera”) dominated Italian opera from the 1710s through the 1770s, and Mozart’s example is one of the last masterpieces in the genre. The plots are complex and usually strain credulity with their sudden, magical endings. In the heroic finale of Idomeneo, the hero Idamante thrillingly kills a sea monster, prompting twenty or so minutes of ballet music.

Jeannette Sorrell characterized the suite as “Mozart with a Baroque accent,” and here Apollo’s Fire was in familiar territory. Despite French titles (Chaconne, Passepied, Gavotte, etc.) the music is thoroughly Germanic. The movements are full of impressive majesty and virtuosic writing that was impressively played on Friday evening. My reservations about phrasing earlier in the program melted away.

You could see the relationship at work on a practical level. Repertoire for two players at the same piano requires a certain choreography. There’s just one of each pedal to share, and the hand crossings left and right — which can be so fun to watch a soloist pull off — get more complicated when another person’s involved. At times, Pompa-Baldi drew a hand away from the keyboard and into his body, making room for Friscioni, and at the close of a few delicate phrases, the two were crouched together over the same final notes at one end of the instrument. END_OF_DOCUMENT_TOKEN_TO_BE_REPLACED

The signature sounds of these famous film scores are not so much John Williams’ invention as allusions to other classical pieces. The foreboding half-step from Jaws, growing more and more furious in the cellos and basses, shares something with Dvořák’s “New World” Symphony and Bartok’s Miraculous Mandarin. END_OF_DOCUMENT_TOKEN_TO_BE_REPLACED

Unlike most concert pianists, who seem to have taken to the keyboard while they were still learning to walk, Kharitonov only began his studies at the age of 16. But he plays with such naturalness and easy virtuosity that you’d never imagine he came late to the party. END_OF_DOCUMENT_TOKEN_TO_BE_REPLACED

Each concert in “Beethoven and Beyond” includes two of LvB’s string quartets with a contemporary work in between, usually by way of contrast, although in her introductory remarks, primo violinist Annie Fullard drew thematic connections between the pizzicati in Beethoven’s “Harp” Quartet and Jessie Montgomery’s Strum. END_OF_DOCUMENT_TOKEN_TO_BE_REPLACED