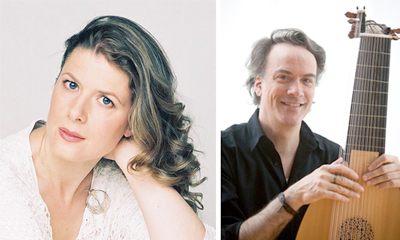 There was a full house for this “preview performance” on a warm but not stifling evening (large doors at either end of the barn were open for ventilation). The performance began in full daylight; by the end, the last stage of dusk had enveloped the barn in darkness.

Newfoundland stands at the eastern edge of Canada, remote and barren with 10,000 miles of rocky coastline. Originally settled by the Irish, Scots, Welsh, French, and British, Newfoundland did not become a part of Canada until 1949, after rejecting a proposal to become a protectorate of the United States. Newfoundland’s isolation helped form its own regional identity, a unique culture bred of Celtic, French, and English influences.

Hall noted in her affectionate program notes that the people of Newfoundland have been looked upon as the “hillbillies” of Canada. But just as the culture of Appalachia is complex and sophisticated in its own way, so too are the songs, instrumental music, and stories of Newfoundland. Meredith Hall’s love for the music and culture of her homeland was obvious throughout the performance.

The songs focused on universal themes: love lost, love found, magic, and the hard life of a rural and fishing society. Although many of the songs were native to Newfoundland, some traditional Irish instrumentals were incorporated into the program. The arrangements were mostly by Hall and Bergeron, although a fair amount of collaborative improvisation probably went into the final performed versions.

The program was so rich that only a few highlights can be mentioned here. Robin Grenon’s harp was the perfect foil for Meredith Hall’s light, expressive soprano in I Will Hang My Harp on a Willow Tree, which uses words from the 1850s but was given a new tune when it made its way to Newfoundland. The Saucy Sailor (a dialogue between “He” and “She”) gave percussionist Patrick Graham his moment to shine. He played an instrument concocted from what appeared to be a string mop. The mop head was decorated with a skull, and the strings were the skull’s “hair.” Other sound-making devices were attached to the mop handle, and Graham pounded the whole apparatus on a box to create the beat for the song.

Our Ship She Is Ready to Sail Away wistfully depicts Irish immigrants leaving their homeland for a new life in Newfoundland. The modal tune was followed by two rousing Irish dance tunes. At several points in the program, Meredith Hall gave recitations of poetry and stories from her homeland, one of them performed in the local dialect.

A hallmark of Apollo’s Fire’s own productions is the seamless integration of one part of the program into the next, creating a theatrical whole. That was missing in “My Island Home,” leading to some awkward transitions, and applause that interrupted the flow of the show. There is nothing intrinsically bad about a “traditional concert approach,” but here it failed to take full advantage of the atmospheric music and the venue, slowing the progress of the performance.

Meredith Hall is a talented performer, yet at times she worked too hard to project the music through her body gestures. Subtlety of physical expression might have been even more effective.

It was a revelation to hear her give a recitation in dialect, and it would have been fascinating to hear her sing in that dialect, especially since the full texts of the songs were printed in the program.

Because a beautiful sameness stretched over the concert’s 90-minute duration, Hall might also have considered a more radical vocal approach — leaving behind the purity of her classical voice, lowering the keys, and throwing the weight of her chest voice into some of these songs. That could have produced a more dramatic and compelling effect, reflecting the troubling nature of some of the texts.

But this was a preview of “My Island Home,” and logistics will likely be smoothed out in succeeding performances. As a show, it has much to offer, with the potential to rival the success of Apollo’s Fire’s own crossover creations.

END_OF_DOCUMENT_TOKEN_TO_BE_REPLACED

Rodgers & Hammerstein’s Cinderella was originally produced for television in 1957 — seven years after the animated Disney film was released — and starred Julie Andrews. According to the Rodgers & Hammerstein website, it was viewed by over 100 million people. END_OF_DOCUMENT_TOKEN_TO_BE_REPLACED

The story line has its origin in an 1855 play and an 1842 farce that Thornton Wilder mined for his 1938 play The Merchant of Yonkers. When that turned out to be a flop, in 1954 Wilder made the crucial decision to re-center the show around the character of the legendary marriage broker Dolly Gallagher Levi and renamed it The Matchmaker. END_OF_DOCUMENT_TOKEN_TO_BE_REPLACED

The Dodero Center for the Performing Arts at the Gilmore Academy in Gates Mills is one feature of an impressive campus. The auditorium is shallow, the stage is deep, and the ensemble played without a shell. Throughout the program, the sound, especially in instruments’ lower registers, tended to disappear. END_OF_DOCUMENT_TOKEN_TO_BE_REPLACED