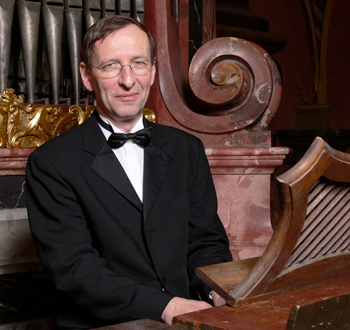 Karel Paukert invited his longtime friend and fellow Czech organist Jaroslav Tůma to open his ambitious Ars Organi series at St. Paul’s Episcopal Church in Cleveland Heights with two recitals last weekend. The purpose of the seven-event festival is to celebrate the church’s music program and its distinguished collection of keyboard instruments. On Friday evening, September 15, Tůma took each of those four instruments out for a spin, and on Saturday afternoon, September 16, demonstrated his command of the art of improvisation in an hour-long program of symphonic scope.

Friday’s program began on the Vladimír Šlajch positif organ with J.S. Bach’s Fantasie and Fugue in a, BWV 904, continued on the Matthias Griewisch Italian harpsichord with François Couperin’s Les Baricades Mistérieuses and Les Bergeries, moved to the Italian Baroque-style gallery organ by Gerhard Hradetzky for Tůma’s own variations and passacaglia on 17th-century hymns by Adam Václav Michna, and ended on the 1952 Walter Holtkamp, Sr. organ with Wilhelm Middelschulte’s reworking of the famous Bach Chaconne and a movement from Petr Eben’s Musica dominicalis.

It’s not easy for a recitalist to adjust his touch to four different kinds of keyboard action in a single program, but Tůma’s fingers immediately found their groove on each instrument. The little Šlajch organ — clad in a striking red case — purred along agreeably in the Bach Prelude and, with the addition of higher-pitched stops, danced gaily through a fugue that at one point took a surprising, chromatic detour.

Tůma’s decision to play French music on the Italian-style harpsichord may have been a bit odd, but his performance of two Couperin works which appear together in print made a lovely impression. Though the meaning of “mysterious barricades” remains itself a mystery, Tůma lavished rubato on the piece, leading the listener to suspect he regards it as something of a musical obstacle course. Bach admired the bucolic Les Bergeries enough to copy it into his wife’s notebook, and indeed it makes a fine pairing with Barricades.

Perhaps the most fascinating set of the evening involved Tůma’s own responses to hymns by Adam Václav Michna of Otradovice (1600-1676) which bear the Messiaenesque titles Allegro of the Ascending Jesus Christ and Labyrinth of the Divine Love. The first hymn inspired Tůma to compose (or improvise?) a set of variations, while the second begat a Passacaglia in the style of Johann Philipp Krieger. Both works were imaginative and colorful, and Tůma made full use of the “toy” stops on the Gerhard Hradetzky organ that evoke Tuscan bells and warbling birds.

A number of composers in the 19th century set out to gild the lily by “transcribing” Bach’s organ music — really a process of adding extra layers to what was perfect and complete to begin with. A grotesque example is Wilhelm Middelschulte’s reworking of the Chaconne, dedicated to Ferruccio Busoni. Tůma embraced the work, unleashing the full power of the Holtkamp organ at several points but also finding enthralling combinations of soft registers for quieter sections and everything in between.

No less powerful was the lengthy Finale from Eben’s “Sunday Music,” a wide-ranging work that begins like a toccata before moving on to a section introduced by a galumphing bass line, followed by eerie interludes, fanfares, and triumphant gestures the composer intended to represent the triumph of good over evil. Jaroslav Tůma put it across with well-chosen colors, varied articulation, and the kind of confident virtuosity that deserves a big ovation at the end — a gesture that was immediately forthcoming from Friday’s smallish but enthusiastic audience.

Improvisation is as important a part of the toolkits of European organists as written-down literature, and performers like Tůma are well-practiced in the art of creating concert-length works on the fly. In his program notes, the organist prepared his audience for the experience, saying that because he leans toward the “clean slate” approach rather than to the highly-preconceived model of improvising, the shape of the resulting music would be due to some circumstances he can’t control:

What if the organ fails? What if I feel the audience is suddenly bored? I have to create the building forms as well as select harmonic and stylistic means in a flowing musical stream in real time. Hardly anything is given in advance, only a circle of themes, a roughly estimated length of the improvisation considered and its basic nature. Everything else stems from the possibilities of the particular organ, the acoustics of the premises and momentary inspiration.

Tůma has performed his Má vlast improvisation on several occasions, and never quite the same twice. Saturday afternoon’s version presented a completely satisfying six-movement structure out of which familiar tunes poked their heads, but whose musical material was constantly varied in texture and color. Playing fluently and without any blips in inspiration, Tůma delivered a tightly-wrapped musical package that was continuously alluring and interesting. Moments of wit abounded and one gesture — two dry and widely separated cadential chords at the end of “Vltava” — made some of us laugh out loud. And at the end, Tůma’s brilliant performance made us leap to our feet.

Click hereJaro for a printable copy of this article

END_OF_DOCUMENT_TOKEN_TO_BE_REPLACED

The Orpheus myth inspired French Baroque composers Jean-Philippe Rameau and Philippe Courbois to write expressive solo cantatas about the famous Greek musician-poet and his futile attempts — because of his own impatience — to rescue his beloved Eurydice from the grasp of Pluto in the Underworld. These are beautifully performed by the clear-voiced soprano Hannah De Priest and the velvet-throated baritone Jonathan Woody (who makes a walk-on appearance in the Rameau). END_OF_DOCUMENT_TOKEN_TO_BE_REPLACED

Now that live concerts are beginning to proliferate, it was delightful to hear Oberlin cello professor Darrett Adkins ring a change on the solo suite format with his Hypersuite No. 3 on September 28 in the Cirigliano Studio Theatre at Lorain County Community College. His program opened the new season of Signature Series performances in Elyria, and was dedicated to the memory of Eva Hornyak. END_OF_DOCUMENT_TOKEN_TO_BE_REPLACED