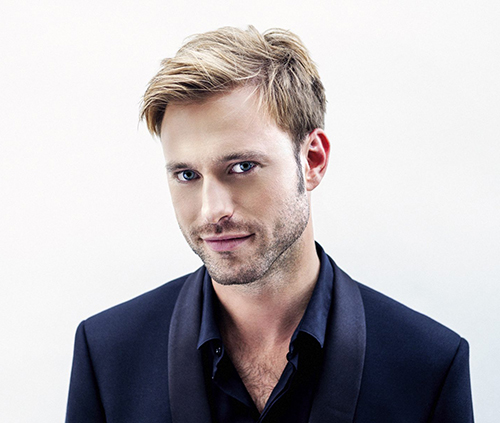 Since then, Appl has etched out distinguished international credentials in opera and concert music, but he has specialized in Lieder, a subject he now teaches at the Guildhall School in London. It’s music dear to his heart, but he knows it’s often a hard sell in the 21st century. “When I decided to do a lot of song recitals, I knew this would not be an easy step,” he said.

“Very often I hear the argument that these texts out of the 18th and 19th century are old-fashioned or use vocabulary we’re not using anymore. But when you look deeper, these songs are about emotions we all carry deep in us — fear of loss, or death of someone, or being in love. For me, the point is how to connect with an audience and how to make this art form suitable for the 21st century.”

Fischer-Dieskau was an important force in Appl’s development. “Meeting him was obviously one of the greatest privileges I had in life, but it’s a good thing that I met this giant quite late, when I was 28 or so. Very often when you work with someone of the same voice type, you try to imitate them or take too much from the experience. He was someone who never tried to overpower you or said you had to do something in a certain way. During the three and a half years I studied with him, we worked on interpretation and technique, but also on stage presence, and how to put a program together. He helped me with promoters in Europe. He was not just a voice teacher or a coach, he was really a mentor.”

Among the important influences Appl took away was Fischer-Dieskau’s relentless effort to re-examine the repertoire during his 40-year career. “He tried until the end to dig into the music deeper, look into the texts and the score and the harmonies again and again, and consider the life situation each poet was in at the time — this incredible passion for learning more and seeing a piece in a new way. I think there’s a big danger in our profession to just deliver but not really re-create every time we perform. That’s something I found most inspiring with him.”

Appl also noted that his mentor constantly worked to reform the art song recital, which had come to include opera arias and a very dramatic approach to performing. “He made the art song form clean again.”

Benjamin Appl began his current tour with a big triptych of Schubert recitals at the Park Avenue Armory in New York, performing Die schöne Müllerin, Schwanengesang, and Winterreise over three nights between January 6 and 10, a marathon he’ll repeat next July in Barcelona and next season in London.

His Cleveland recital with pianist James Baillieu will be a mixed program. “The first half will all be songs on poetry by Heinrich Heine, including three from Schwanen- gesang, and one of the greatest of all song cycles, Schumann’s Dichterliebe.”

Responding to a request from the Art Song Festival, Appl will sing “three little pearls of French melody” by Henri Duparc. “He wrote so many songs and tried so many different approaches, but there are only 17 left — the rest he burned because he thought they were not good enough,” Appl said.

Then the baritone will turn to Last Letters, five English songs by the young American composer Nico Muhly. “In 2015, I did a tour through Europe organized by Echo, who asked me to make a commission. I always liked Muhly’s vocal style, so I met him, we talked, and I was lucky to have him write these songs for me. They’re all love letters from the Great War.”

Appl will end his program with six German songs by Edvard Grieg. “They’re short, charming, and some of my favorites,” he said. “They’re connected with Nordic folk music, underrated, and not often performed.” 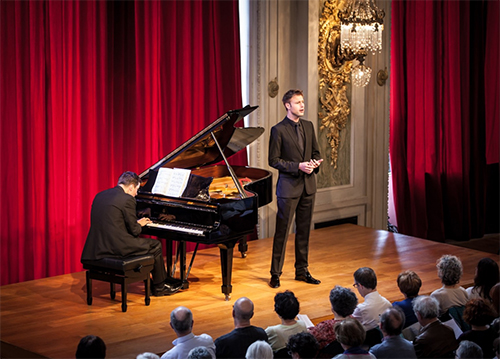 Appl in recital at the Opéra de Lille.

In preparing a recital, Appl strongly believes in doing his homework: learning the notes and the texts, of course, but also settling on how to bring his own interpretation and personality into a song or cycle. Sometimes the music itself offers multiple ways to do that. “I see Winterreise as an actual journey. You walk along a path and there are some turnings to choose. Sometimes you decide on one direction and sometimes the other one. The importance of preparing the music is to know it well and be comfortable with it, but also to be very open with what happens during an evening.”

Appl thinks that the song recital format is ideal for allowing subtle changes in interpretation from one performance to the next. “The audience is a big part of the performance itself — it’s all about communication, even if one side is a non-verbal one. And the nice thing about song recitals is that you can actually see the audience, compared to opera where the lights can be so bright that it’s difficult to visually connect with the listeners.”

The vagaries of day-to-day existence can also affect performances. “If one day you slept badly or got a call from an agent or a family member, this also influences your interpretation,” Appl said. “Every evening is different. I find that quite challenging, but also the most wonderful thing about performing art songs.”

Since the Lieder recital originated in domestic music rooms, how does he feel that performing in a larger space alters the feeling of the art form?

“I remember reading a 1982 interview with Fischer-Dieskau where he said he preferred performing in bigger spaces,” Appl said. “That may have had something to do with ego — or earning higher fees. But very often a small space can be intimidating for an artist. When the audience is very close, you feel a bit locked up. There are places like The Wigmore Hall in London with 500 to 600 seats that has a very intimate feeling, and that’s the perfect size for song recitals.

“On the other hand, I recently did Mahler songs with piano in a stadium in Osaka, Japan, with 16,000 in the audience, and it felt quite good. They handled the lighting very well, and obviously they had big screens with the text, but very often it’s more a matter of creating an atmosphere. It’s tricky. Sometimes it works, sometimes it doesn’t, and you can’t always tell why.”

Sometimes the singer can create that atmosphere just through imaging. “There’s a beautiful picture that the great mezzo-soprano Brigitte Fassbaender used. She always said that when she sang recitals, she had an image of throwing out a net and then pulling it back, and the pulling back is way more important than the throwing out. I often find that helpful in moments where you feel a bit lost in a big space.”

The cimbalom was the feature of the show, an instrument capable of taking on many personas. Its performer, Chester Englander, has shaped his career around the instrument, and has inspired composers to write more repertoire for it, some of which was presented on the program. END_OF_DOCUMENT_TOKEN_TO_BE_REPLACED

You wouldn’t expect that acoustic from a glance at the nave, which is wide and long, but not especially lofty. But when I guest conducted a local amateur choir and professional orchestra in Beethoven’s Mass in C there a few years back, during the first rehearsal we released the final chord of the “Gloria” and listened in astonishment for the next several seconds. The sound continued to roll down the space like the big wave that surfers dream about. END_OF_DOCUMENT_TOKEN_TO_BE_REPLACED