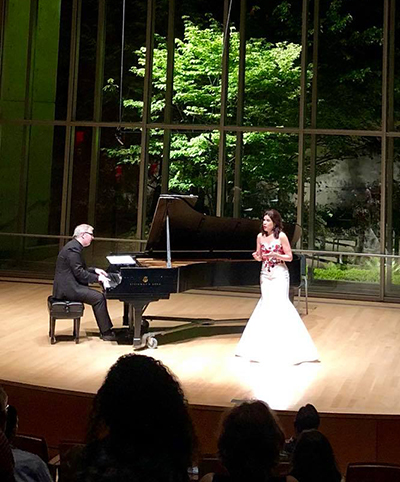 Soprano Anna María Martínez and pianist Craig Terry performed an arresting program as the second recital of the 2018 Art Song Festival at the Cleveland Institute of Music’s Mixon Hall on May 25. Their authoritative performances covered a wide range of repertoire from Spain, the Caribbean, and Mexico.

Martínez, born in Puerto Rico of Puerto Rican and Cuban ancestry, has sung leading roles at the Metropolitan Opera and other notable venues around the world. Terry has collaborated with a Who’s Who of star singers. Both musicians were at the top of their game on Friday evening.

Martínez’s voice is especially dark-hued and warm in its lower register, and full-bodied, lyric, and evenly focused up to its top. The sound was never strident, even at full force, her intonation was perfect, and her phrasing subtle and well-considered. Terry was technically superb, proving to be a perfect partner in his give-and-take with Martínez. Their musical lines enjoyed the ebb and flow that sets an expert performance apart from the perfunctory.

The first half of the program was devoted to classic song cycles by late 19th- and early 20th-century Spanish composers: Joaquín Rodrigo, Joaquín Turina, and Manuel de Falla. Rodrigo’s Cuatro madrigales amatorios (“Four Love Madrigals”) share folksong-like simplicity with the technical sophistication of art song. The third, ¿De dónde venís, amore? (“Where did you come from, my love?”), was perky, with passages replicating laughter that leapt to the soprano’s high range. The coloratura of the last, De los álamos vengo, madre (“From the poplars have I come, mother”), depicts the native trees of Seville.

As the title suggests, Turina’s Poema en forma de canciones is a single work broken down into several songs, beginning with Dedicatoria, a dramatic solo piano prelude. The music of the four succeeding songs reflects the influence of French Impressionism, and the text contains Greek Classical allusions.

De Falla’s Siete canciones populares españolas came as close as anything on this program to popular standard repertoire. And with good reason: the vocal parts and accompaniments are full of virtuosity, expressing a range of emotions. The third, Asturiana, is brief and intensely sad, describing a pine tree crying along with the grief-stricken narrator. Martínez’s singing of the lullaby Nana was hypnotic in its powerful simplicity, and Polo was dramatic in its vocal declamation, including wrenching cries of ¡Ay! — and a sorrow that can’t be told to anyone.

If the first half of the program showed Anna María Martínez’s mastery of the classical Spanish vocal repertoire, the second half revealed a much more personal side of the soprano’s life and art. As in a cabaret performance, she introduced a selection of songs from what could be considered the “Great Latin American Songbook.”\

Beginning with Monsita Ferrer’s Amanecer, a description of dawn as seen from the mountains in Puerto Rico, Martínez gave a heartfelt plea for the people of the island in the struggle to regain their lives after 2017’s Hurricane Maria. She also sang two songs by Rafael Hernandez Marín, who gave up his American citizenship when it became clear that Puerto Rico would not become a U.S. state in his lifetime. The last stanza of Marín’s Lamento Borincano (“Puerto Rican Lament”) reads,

Puerto Rico, land of Eden
And sung to by the great Gautier
Called the pearl of the seas,
Now that you’re dying in your sorrow,
Let me sing to you, too.

Marin’s Preciosa (“Precious”) is a popular song vividly describing the beauty of the island. Martínez referred to it as the “unofficial second national anthem of Puerto Rico.”

Songs by Ernesto Lecuona and Xavier Montsalvatge concern themselves with the racism encountered by black and mixed-race Cubans. Mexico was represented by songs by Manuel Ponce, Rosario de Alba, Maria Grever, Daniel Catán. Craig Terry improvised a hot jazz bridge between the verses of Alba’s Soy loca por tu amor (“I’m Crazy for your love”). The concert closed with El día que me quieras (“The Day That You Love Me”), an Argentine tango by Carlos Gardel.

Martínez and Terry returned for two encores: a zarzuela aria that had famously been sung by Plácido Domingo’s mother, and a meltingly beautiful song by Fernando Obradors. The audience was loathe to let Anna María Martínez and Craig Terry leave. This was a memorable recital.

Jackson began the program with a recitation of Langston Hughes’ poem “Helen Keller” — the first of five poems by Hughes that served as interludes between each piece on the first half. END_OF_DOCUMENT_TOKEN_TO_BE_REPLACED

Pianos with pins and tape on strings, a bass drum and tam tam, crotales, Almglocken, and vibes. Microphones were hooked up all around the instruments. The feed was sent to speakers around the room. Lighting designer Nicholas Houfek hung incandescent globes over the arrangement of instruments from thin black wires stretching across the beams. END_OF_DOCUMENT_TOKEN_TO_BE_REPLACED

From the podium, Elim Chan set an ambitious tone for the evening. The rising star conductor, here in her Cleveland Orchestra debut, has a commanding style, and every twist and turn in Saturday’s performance tracked closely with her baton. END_OF_DOCUMENT_TOKEN_TO_BE_REPLACED