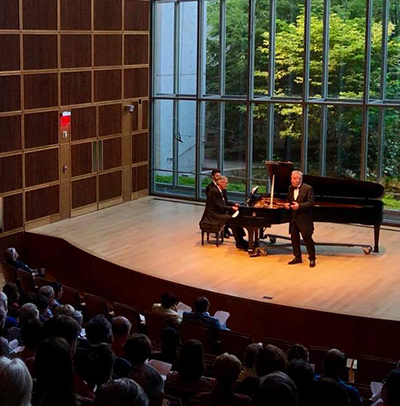 Christoph Prégardien has traced the path of Schubert’s song cycle Die schöne Müllerin many times, yet he always seems to find it fresh beneath his feet. In two recordings and dozens of recitals, the German lyric tenor has made the cycle his own, sounding the hope, heartbreak, and resentment of its wandering miller with such assurance that his interpretation of the story feels genuinely true. In their performance for the Art Song Festival at the Cleveland Institute of Music on May 24, Prégardien and pianist Roger Vignoles gave its 20 songs such fine nuance and gravitational force that adjectives like “persuasive” hardly suffice.

The concert took place in CIM’s Mixon Hall, as evening sunshine gave way to deepening twilight. This nicely mirrored the trajectory of Die schöne Müllerin as a story, which opens in a mood of boundless promise but tacks relentlessly downward into frustration and death. As in so many of Schubert’s songs, ambiguity reigns: does the young man ever actually win the affections of his employer’s daughter, or is he deluded? Is the forest brook to which he addresses his hopes, fears, and rants — the one in which his body lies by the end — a passive feature of the landscape, or a supernatural agent that lures him to his demise?

In Das Wandern, the first song, Prégardien and Vignoles articulated the melodies of each strain in a manner that echoed Wilhelm Müller’s descriptive poetry: bouncy for walking, flowing for water, heavy and disjunctive for rocks. Vignoles obscured the meter of his part in Wohin?, echoing the uncertainty of the text. Not until the fifth song, Am Feierabend, did the disorder in the young man’s mind come through clearly: relentless yet unstable, he starts to sound bitter early on in Prégardien’s reading.

For sheer ecstatic beauty, nothing in the recital compared to the moment in Der Neugierige when, after a long pause, Prégardien floated his way into the third verse, addressing the brook directly. By the end of the second verse in Ungeduld, Vignoles had grown more emphatic, Prégardien more insistent.

Morgengruß contained moments of gossamer delicacy, Des Müllers Blumen rolled along in little swirling gestures, and Tränenregen swayed gently. The middle portion of Prégardien’s range is incomparably rich, which became especially obvious in this latter song. He can also descend convincingly into baritone territory, as he did as an ornament on the word depths in its fifth verse.

More than any other song, Mein gave Prégardien an opportunity to play a man coming unglued. Almost violently energetic, he glowered into the audience as he declared the miller-maid “mine.” He and Vignoles sped up together throughout — an appropriate touch for this most manic of the cycle’s installments. The tenor exerted himself to the extent that he had to rest for a moment before Pause. Vocal sound itself became an expressive device in Der Jäger, when Prégardien spat out consonants so vehemently that the vowels almost disappeared.

The sun was setting by the time Die liebe Farbe and Die böse Farbe rolled around — two meditations on green, the color of both the forest and the clothing worn by the hunter who arrives and draws the eye of the miller-maid. As Prégardien sang the first of the pair, haunted and slightly terrifying amid the numb tolling of a single note in Vignoles’s part, the spotlit garden behind the Mixon stage became shadowy.

In Der Müller und der Bach, something begins to sing back to the death-desiring young man, promising peace in heaven. Is it really the brook, supernaturally come to life? A voice inside the hallucinating man’s head? An angel? Death? Whatever it is, it takes over entirely in Des Baches Wiegenlied, singing with chilling sweetness. Prégardien delivered this long number with a variety of inflections, arriving at celestial serenity by the final lines. Complete silence fell for what felt like an age; then, applause. As an encore, Prégardien and Vignoles turned in a wonderful, subtle performance of The Youth and Death, a posthumously published Schubert song that pairs well with Die schöne Müllerin in both sound and theme.

Jackson began the program with a recitation of Langston Hughes’ poem “Helen Keller” — the first of five poems by Hughes that served as interludes between each piece on the first half. END_OF_DOCUMENT_TOKEN_TO_BE_REPLACED

Pianos with pins and tape on strings, a bass drum and tam tam, crotales, Almglocken, and vibes. Microphones were hooked up all around the instruments. The feed was sent to speakers around the room. Lighting designer Nicholas Houfek hung incandescent globes over the arrangement of instruments from thin black wires stretching across the beams. END_OF_DOCUMENT_TOKEN_TO_BE_REPLACED

From the podium, Elim Chan set an ambitious tone for the evening. The rising star conductor, here in her Cleveland Orchestra debut, has a commanding style, and every twist and turn in Saturday’s performance tracked closely with her baton. END_OF_DOCUMENT_TOKEN_TO_BE_REPLACED