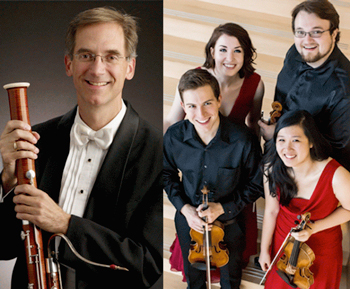 At the end of a long concert season, the final performance in a series may be a happy or a bittersweet moment. For the Mosa String Quartet — violinists James Thompson and Brian Allen, violist Christine Wu, and cellist Anna Hurt — the last Arts Renaissance Tremont concert on Sunday, May 7 at Pilgrim Church was just about the last appearance the group would make as a quartet, for Wu and Allen are off to graduate studies at Juilliard and the University of Michigan, respectively.

That’s bittersweet, for the Quartet’s performances of Schubert’s Quartettsatz in c and Ravel’s String Quartet on Sunday were energetic and full of color and character. Playing on a large platform that lifted the group off the carpeted floor in the Pilgrim auditorium, the Mosa behaved more like a seasoned quartet who had logged years of playing together than students just out of conservatory. Their ensemble was impeccable, their dynamic range impressive. The sheer physicality of the group was engaging, and they seemed to be having a terrific time playing together.

Cleveland Orchestra assistant principal bassoon Barrick Stees was the catalyst for this program. Wanting to perform two works for bassoon and string quartet by Uruguayan-born composer Miguel del Aguila that he had been involved in commissioning, Stees got a tip that the Mosa was just the group he was looking for.

The second half of Sunday’s program was devoted to Aguila’s Malambo, co-commissioned by Stees and other parties and completed in 2016, and Nostálgica, a three-movement suite he directly commissioned from Aguila in 1998. The composer revised it in 2016 for Sunday’s premiere performance.

Arresting strokes from the quartet precede the bassoon’s entrance on long notes in Malambo. Named after an old Argentine dance, the piece eventually generates dance rhythms and calls for all the players to stomp on the floor.

The solo bassoon gets to act like a singer in Nostálgica, one who seems to be going through vocalization exercises in the first movement in the form of ascending and descending arpeggios, but who has more melodic things to say later. Aguila adds string harmonics to the mix in the gentle second movement. In the finale, the bassoon abandons its lyrical singing role in favor of the rhythms of a Latin dance. More foot stomping brings the piece to a clever end.

For anyone who finds premieres of new works about as enjoyable as a root canal, the Aguila pieces were as sunny and accessible as the suddenly-blue Cleveland skies after a dreary week of rain. And both were masterfully played by Stees and the strings. Bassoonists who have access to a string quartet as fine as the Mosa should rush to get their hands on these pieces.

Editor’s note: an earlier version of this review reported that Anna Hurt would be leaving the quartet for graduate studies at the University of Michigan. We mis-heard the oral announcement. It is Brian Allen who will be moving on to Ann Arbor.