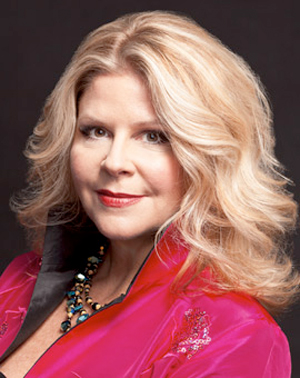 Susan Graham’s splendidly communicative recital program on the Baldwin Wallace Art Song Festival on Thursday evening, May 26 in Gamble Auditorium, involved slipping twenty extra songs in between the original eight of Robert Schumann’s Frauenliebe und -leben. That resulted in a rich, nuanced commentary on the composer’s chronicle of a woman’s life cycle from the first glimpse of her beloved all the way through marriage, pregnancy, and childbirth, ending with his demise.

Graham credits the idea for the program to her longtime collaborative pianist Malcolm Martineau, but its execution by the well-known mezzo-soprano and her eloquent partner, pianist Bradley Moore, is what made the notion work so beautifully in recital. Sung end-to-end, Schumann’s original cycle might become sentimental, even cloying. Contrasting songs by Poulenc, Mahler, Granados, and the other composers expanded the theme while injecting some air, a little cynicism, and a bit of welcome humor into the cycle. Although the program approached two hours in length, the journey was continuously engaging and compelling.

Some of the interpolations were particularly striking. John Dankworth wrote his setting of Shakespeare’s “Sonnet 18” for his wife, Cleo Laine, in a gentle jazz style. Ned Rorem’s “O You Whom I Often and Silently Come To” lasted only 30 seconds and drew a laugh simply for its brevity.

Gustav Mahler’s ostensibly folk-like but inwardly sophisticated “Rheinlegend,” was a companion piece on the program to Schumann’s “Du Ring an meinem Finger” (in the Mahler song, the ring gets eaten by a fish and ends up on a king’s table). Joaquin Turina’s wonderfully ambivalent “Los dos miedos” (“The two fears”) added a note of emotional complexity to the middle of the cycle.

Bringing just the right touches into the post-partum section of the cycle were Francis Poulenc’s whimsical “La Carafon,” about a carafe that longs for a baby (“like Mrs. Giraffe’s at the zoo”), and Richard Strauss’s “Wiegendliedschen,” a cradle song about spiders and bees. And Enrique Granados’s dramatic “O Meurte Cuel” from Tornadillas en un estilo antiquo gave Graham the opportunity to rail fiercely about fate, sometimes in a low, growly register that was absolutely hair-raising.

Other composers who made cameo appearances in the mix were Edvard Grieg, Gabriel Fauré, Ture Rangström, Maurice Ravel, Henri Duparc, Claude Debussy, Pyotr Tchaikovsky, and Hector Berlioz. The cycle even drew on two Schumann songs from another cycle, Myrten, to include conversations between a bride and her mother.

A recital of songs by eighteen different composers could be a logistical mess, but Susan Graham’s program drew them all into a single narrative held together by the sturdy structure of Schumann’s Frauenliebe und -leben. Seven languages were represented, and only English texts were printed out, but thanks to the mezzo-soprano’s faultless diction, those who knew a little French, German, or Spanish could easily follow along. In the case of Norwegian, Swedish, and Russian, Graham’s amazing communicative powers nearly made translations unnecessary. With such a gorgeous, supple voice as Graham’s, you could listen to her all day.

Very little came between performers and audience on Thursday evening. Graham had her score on a music stand and Moore had loose pages laid out flat on the closed music desk of the piano, but neither were glued to their notes. The ten teams of singers and pianists who are being coached during the Art Song Festival enjoyed a thrilling closeup view of two seasoned artists in action on Thursday evening to add to what they learned in their master classes.

The cheering, whistling audience called Graham and Moore back to the stage for two more selections: a lovely Renaldo Hahn song and an inventive arrangement of “Hello, Young Lovers” from The King and I — Graham’s avowed favorite from the Paris production of the Rodgers & Hammerstein show, where she recently sang the role of Anna.

Published on ClevelandClassical.com May 29, 2016.

END_OF_DOCUMENT_TOKEN_TO_BE_REPLACED

The strings-only work by Berg has made relatively frequent appearances on the Orchestra’s programs. In 2021, the musicians recorded it for the In Focus series, and it appeared again on last year’s European tour. Friday’s rendition maintained the group’s characteristic light and effortless playing, each section blending as much as possible to echo the work’s original form as a string quartet. At fifteen minutes total, the piece is quite short, but the dense encoded musical meanings require some extra-attentive listening. Splitting up the three movements ensured that each one could be appreciated on its own. END_OF_DOCUMENT_TOKEN_TO_BE_REPLACED