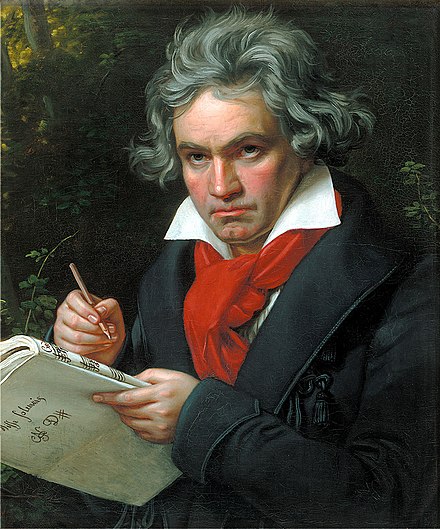 In case you’re not aware, 2020 marks Beethoven’s 250th birthday. Although the actual day is not until December, arts organizations around the globe are already knee deep in celebrations, and Oberlin is no exception. From Friday, March 6 through Sunday, March 8, Conservatory string students will present tag-team performances of all of the composer’s sixteen quartets in five free concerts in Stull Recital Hall. The marathon begins at 4:30 pm on Friday, with other concerts scheduled on Saturday and Sunday at 1:30 pm and 7:30 pm. You can join the live webcasts here.

“This undertaking is unique to other schools in that all the performers are students,” violin professor Sibbi Bernhardsson said during a conversation in his studio. “The students are so excited — we’re all excited about this project, and it’s been all hands-on-deck. The entire string faculty is involved coaching the groups. And some of the theory professors have been coaching as well by offering their perspectives. Some are highlighting the quartets in their courses. So there’s a great synergy around the project. Presenting the complete quartet cycle is exciting no matter where you are, but we’re doing it in five concerts over two and a half days.”

The violinist noted that works from each of Beethoven’s three periods — early, middle, and late — sound like music by three different composers. “Three great composers, but three nonetheless. And we are not presenting them in chronological order, so each period will be represented in every concert.”

The faculty began planning the project last year, and it has included a Beethoven Quartet intensive last fall as well as a special winter term project. “We wanted to involve as many of the students as possible, but there are also the realities of being in a conservatory —  seniors are taking grad school auditions, opera and orchestra rehearsals, etc. So we are splitting the sixteen quartets and the Große Fuge between twenty groups. The majority are playing an entire quartet, although three of them will be split between two groups.”

Having spent seventeen years as a member of the award-winning Pacifica Quartet, Bernhardsson understands the value of having all students study the quartets, not just string players. “It’s important to know that when Beethoven was writing the Opus 18s he had just come to Vienna to study with Mozart, but Mozart died and he ended up studying with Haydn. So the Opus 18s are deeply rooted in the early classical tradition. They are clearly in sonata form and the length is similar to Haydn and Mozart. And the phrase structure is also deeply rooted in what makes pieces ‘classical.’”

Bernhardsson also noted that during this “early” period, Beethoven was still an active performer and conductor. But while he was writing the sixth quartet of Op. 18 he began to lose his hearing. “He fell into a deep depression for obvious reasons, but he was also worried that his career was done. He kept it a secret — who was going to hire a deaf pianist or conductor? And he did contemplate suicide.”

Then came the composer’s famous Heiligenstadt Testament to his brothers Carl and Johann, where he said that there was so much music left to be explored and that would be a source of inspiration to continue living. “That’s what we call the ‘heroic period.’ He wrote symphonies three through eight, the Violin Concerto, the Third, Fourth, and Fifth Piano Concertos, and a lot of the famous piano sonatas.”

During this period the composer’s approach to writing string quartets also evolved. “The dynamic range became greater and while they were still basically in sonata form, he might have two developmental sections. And what he requires instrumentally of each player also expanded. For lack of a better word, the pieces are more romantic in sound and the lines tend to be longer.”

Then the composer experienced a compositional draught. He also lost respect for himself. “He was not bathing and not paying his bills. He was more isolated and developed health problems. And again, he fell into a great depression and contemplated suicide.”

Then, Bernhardsson noted that two things happened: he had a spiritual awakening and began studying the music of Palestrina and Bach. “Beethoven was a connoisseur so he knew Bach, but nobody else knew Bach. And that became a source of inspiration for his late period. He started implementing counterpoint, writing fugues, and using structures from the Baroque and Renaissance period. We are also dealing with a person who had come to complete terms with his fate as a musician and human being. He’s not even concerned about his contemporaries, he’s writing for the future.”

Bernhardsson hopes that audiences will enjoy immersing themselves in Beethoven’s sound world and come to understand that although the composer was a complicated person, his music is filled with optimism. “Some of these quartets I’ve rehearsed for thousands of hours and performed so many times, but they are still so interesting and fresh. When I’m coaching them, it’s like Beethoven is still speaking to us 250 years later — surprising us in such a profound way.”

The cimbalom was the feature of the show, an instrument capable of taking on many personas. Its performer, Chester Englander, has shaped his career around the instrument, and has inspired composers to write more repertoire for it, some of which was presented on the program. END_OF_DOCUMENT_TOKEN_TO_BE_REPLACED

You wouldn’t expect that acoustic from a glance at the nave, which is wide and long, but not especially lofty. But when I guest conducted a local amateur choir and professional orchestra in Beethoven’s Mass in C there a few years back, during the first rehearsal we released the final chord of the “Gloria” and listened in astonishment for the next several seconds. The sound continued to roll down the space like the big wave that surfers dream about. END_OF_DOCUMENT_TOKEN_TO_BE_REPLACED