“We look forward to smashing the heteropatriarchy with you,” cellist Benjamin Swartz said before performing a program of Sofia Gubaidulina, Tamar Diesendruck, and Kaija Saariaho with Boston-based string trio Sound Energy. The group closed the second concert of this year’s Re:Sound New and Experimental Music Festival on Friday June 7 at The Magalen, which featured a sensational first half by the Berrow Duo and made a strong case for the many daring voices of 21st century composers.

Sound Energy, made up of Swartz, violist Samuel Kelder, and violinist Micah Brightwell, began their set with Cryptic Fragments Revisited (2017), a commission from Berklee professor Tamar Diesendruck. “We think it sounds like slime mold growing,” Swartz said — and it kind of did, evolving chaotically with organic ideas. The trio played with impressive unity, bringing out the tension of squiggly lines pushing against staunch, rhythmic figures.

“If you can pick out the melody in each movement, you’ll have to come show it to me, because I’m not entirely sure,” Brightwell said before Saariaho’s luminous Cloud Trio. Ballooning chords speckled with lush harmonies drove forward, scaled back, and generally floated in a hazy atmosphere. The group moved together with body language alone, rarely looking up, and together crafted an air more in mood and gesture than anything concrete.

They brought similarly attentive work to Gubaidulina’s String Trio (1989), the oldest piece of the evening. “It’s an exploration of different types of solitude,” Kelder said, which they communicated by highlighting the contrast between smooth and rough textures. Conflicting dualities abounded — declarative vs. tentative, harsh vs. soft. Sound Energy wallowed in the intense sound scape, giving Gubaidulina’s otherworldly music the attention it deserves. 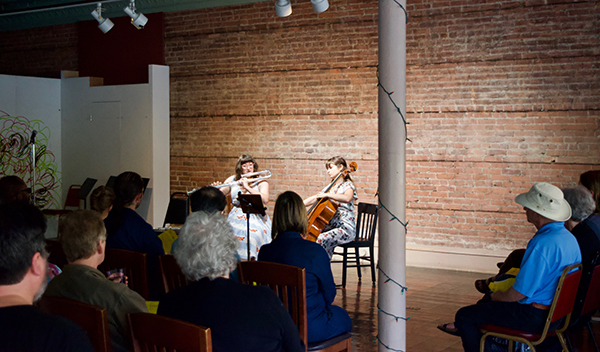 The first half featured the Berrow Duo performing a hypnotic program of works exploring the possibilities of interaction between cello and bass flute. New York City-based performers Leia Slosberg, flute, and Thea Mesirow, cello, share a mutual interest in pushing traditional boundaries into the realms of text, improvisation, and extended techniques, all of which they showcased with their selections.

The two began with Anatomical Venus (2017), a commission from Colombian-American composer Diana M Rodriguez. Subauditory bass flute noises blended with cello swells, and both converged in moments that pushed the margins of unison. The beauty of Rodriguez’s piece was to be found in the juxtapositions — Slosberg grooved with breathy, beatboxed rhythms while Mesirow wandered through longer melodies, and both parts were meticulously prepared.

Leah Asher’s graphic score If we should meet, here (2014) demonstrated the pair’s phenomenal synergy. After the show I asked Slosberg how they go about preparing a graphic score for performance, and she said they approach them with the same focus as any other work. “We think about the density of color versus the density of space,” she said. “We search for same-looking figures, and explore how to see something as a sound.”

Whatever their method, it works. Asher’s three short movements were handled with sensitive, nuanced care, no matter how intense. A beautiful interplay of aggressive flute double tongue and cello fragments drove into a frantic gale of wild oscillations. Both instrumentalists followed the same visual impulse, championing a clear, inspired interpretation.

Berrow Duo’s ended with Yair Klartag’s dark, twisted, and surprisingly charming Hat Trick (2010). Weaving together a diverse sonic tapestry of music and rhythmic speaking, the piece narrates a story from the perspective of a magician going through the motions of pulling a rabbit out of a hat, eagerly awaiting the usual delight “that never fails to surprise” his underage audience.

This time, however, something goes horribly awry. “Just the head, no body…and lots and lots of blood” emerges, to the terror of the children. The rest of the piece deals with the psychological fallout of the debacle.

Through the blood, tears, and vomit of the narrative, Slosberg and Mesirow played with commitment. The story was passed around intricately with a blend of loud and whispered talking, sometimes even spoken through the flute, which created an interesting layering of voices. Part spectacle and part comedy, the Berrow Duo delivered an engaging performance infused with very fine music.