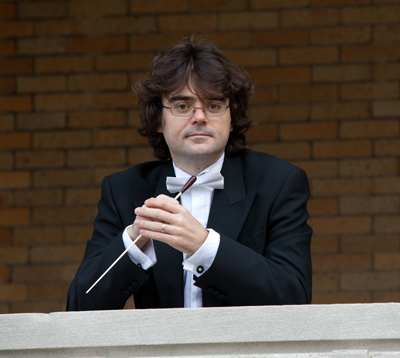 Joining the orchestra at Saint Ignatius High School’s Breen Center for the Performing Arts will be cellist Mark Kosower and violinist Ken Johnston in a program of Saint-Saëns’ La Muse et le Poète for violin, cello, and orchestra, Haydn’s Cello Concerto No. 2 in D, and Beethoven’s Symphony No. 7.

“The two soloists are amazing, and I hear nothing but great things about this orchestra,” Más-Arocas said. “It’s just a gem that Carlton created.” The conductor described the late Carlton Woods, BlueWater’s founder and artistic director of ten years, as “a great person who was true to himself and to his art — just one of those unique and special people who serves the community, cares about others, and makes people feel good.”

Más-Arocas told me more about his hometown of Buñol, which is famous not just for La Tomatina but also for its rich musical tradition. “That was very important for me, but I never even thought about it — it was just with me all the time. We lived in an apartment building, which is pretty typical in Spain, and in the apartment above there were musicians. In the apartment below, musicians. The next apartment down, musicians. You would be walking through the streets and hearing music all the time. Someone might be practicing, and another person two or three buildings away would start picking up on the same melodies as a joke — and then everybody would start joining in.”

The conductor first came to the U.S. to pursue his master’s degree at the Bard College Conservatory of Music. “I was looking for a specific experience of being pushed in many different ways that would bring out the best in me, and I found that in my teachers. It’s not just that I came to get a master’s degree, it changed who I am.”

He described living in America as initially a shock, but one with a sense of discovery. “Many things were coming together for me because of the United States’ power as a culture and the Americanization happening all over. So everything I saw, I would think, ‘Oh, I saw that in the news, I saw that in the movies, I knew about this before and am now experiencing it.’”

Previously on the faculty of Baldwin Wallace Conservatory of Music, Más-Arocas recently accepted two new appointments: music director of the Mansfield Symphony and director of orchestras at Ithaca College, which he called “a beautiful, great school with good people and a big program. BW was great, with very talented people, and I loved the Conservatory. Here in Ithaca I’ll also be teaching masters students in conducting, so it’s a bigger job.”

Coming to Ithaca has been even more meaningful for the conductor in that it represents a connection to a close friend, the late composer Steven Stucky, who lived in Ithaca and taught at Cornell University. “Having all his friends around and going to the same places he did is very special. Everyone you talk to about Steven will tell you he was the nicest, most polite, inspiring person that you can imagine, and extremely generous. He was true to himself to the last moment. Probably a few weeks before he passed, I was emailing with him to ask for some things. He was at that moment in his life where he could say, ‘No, I just can’t,’ but instead he would just say, ‘Sure.’ And that was who he was. He passed away, but his music is still alive, and the people who knew him — he gave us so much that he’s still there.”

END_OF_DOCUMENT_TOKEN_TO_BE_REPLACED

Franz Welser-Möst led the final bows on Saturday night at Severance, like the star of any show should. The Cleveland Orchestra’s music director is in his element presiding over the ensemble’s annual opera production, which this season packs the drama. Verdi’s Otello — in a concert staging that opened May 21 and runs for two more performances (May 26 and 29) — demands big voices, instrumental forces to match, and a conductor who can give it all shape and direction. END_OF_DOCUMENT_TOKEN_TO_BE_REPLACED

The cimbalom was the feature of the show, an instrument capable of taking on many personas. Its performer, Chester Englander, has shaped his career around the instrument, and has inspired composers to write more repertoire for it, some of which was presented on the program. END_OF_DOCUMENT_TOKEN_TO_BE_REPLACED