Vardi and concertmaster Emily Cornelius had some sparkling exchanges early on, supported by short comments from principal cello Kent Collier and the rest of the orchestra. The violas accompanied beautifully, leading to principal second Callista Koh’s charming solo. Meyer maintained a crisp flow.

Vardi soared throughout the range of the clarinet, alternating raucous and syrupy sounds. The final lively and tuneful section increased tempo as Vardi and the Orchestra raced to a rousing close.

In sharp contrast was Norman Dello Joio’s Meditations on Ecclesiastes, a theme and eleven variations loosely based on the famous Biblical text beginning with “To everything there is a season.” Kathryn Wolfe Sebo, cantor at the Temple, added luster by first singing the entire Hebrew text in beautiful cantorial style. She also recited the English text between variations.

The theme included piquant dissonant counterpoint, and tremolo figures accompanying a portentous solo by Cornelius. She joined Collier in playing scintillating tremolos against the ensemble in “a time to embrace.” 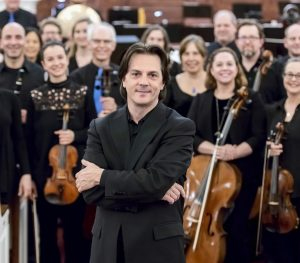 Turbulent violin entrances portrayed “a time of hate, and of war.” Collier’s colorful solo on “a time to love, and of peace” led to glorious major chords from the full ensemble, and a tranquil ending. Meyer conducted with a sense of balance and precision.

In 1874 the 33-year old Antonin Dvořák won the prestigious Austrian State Prize for composition after submitting more than a dozen works. The substantial grant saved him from the threat of poverty. He celebrated this and the birth of his first son by composing the Serenade for Strings in two weeks.

Meyer and the Orchestra presented an engaging performance of that classic. The tuneful and dancelike “Moderato” led to a charming “Tempo di Valse.” The “Scherzo” was highlighted by Koh’s substantial solo against rapid 16th-notes.

After the flowing tranquility of the “Larghetto,” which includes quotations from the second movement, the “Finale” begins with a rustic dance. Violins and cellos exchanged graceful lines against an 8th-note background in the second theme. Following the sparkling 16th notes in the third, the slower Larghetto theme returned. A scintillating Presto coda closed the gorgeous performance.

END_OF_DOCUMENT_TOKEN_TO_BE_REPLACED

Supported by engagingly, yet simple staging by Cara Consilvio, a well-prepared cast of singers told the archetypal story of Cinderella with charm and flair. Framing the production was  a sparse but colorful set and wonderful lighting by Dave Brooks. END_OF_DOCUMENT_TOKEN_TO_BE_REPLACED