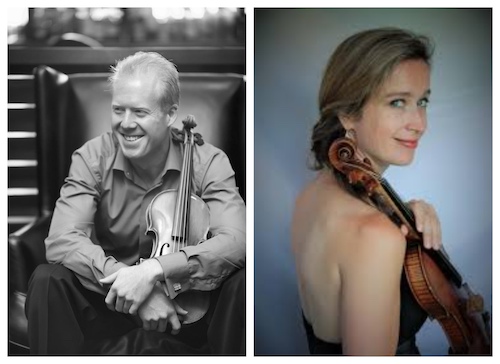 I reached Cornelius later in the week and asked about that comedic connection with Johnston. “Well, I’m honored that Ken would say that — we do make each other laugh a lot,” she said. “It’s a very wry, dry, English kind of humor, I guess.”

Speaking of comedy, that’s something that Johnston hears in the Op. 13 Symphonie Concertante, and in Saint-Georges’ writing in general. “Anyone can write dark music to some extent, but humor is actually very hard.” Failed attempts to be funny through music can “turn your stomach,” he added. “But this has some legitimate humor in it.” When I asked Cornelius about that aspect of the music, she pointed out Saint-Georges’ accomplishments as a swordsman. “This piece is written almost like a fencing duel, and there’s definitely lightness and humor in that.” 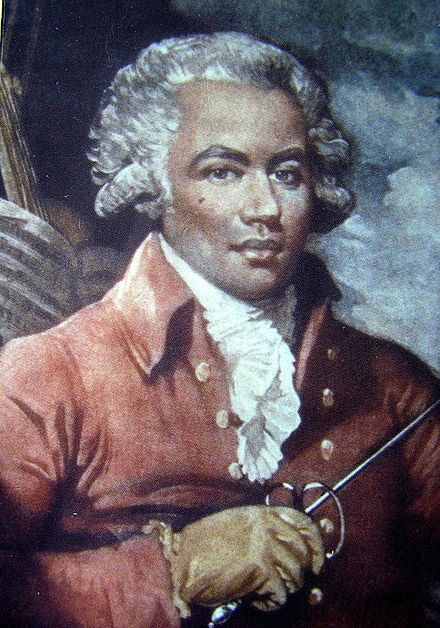 Fencing was only one aspect of this composer’s fascinating life. “The more I read about him, the more amazed I am that Mozart had a movie made about him instead of Saint-Georges,” Cornelius said. “His story is amazing.”

He was born in Guadeloupe, the son of a plantation owner and his wife’s 16-year-old slave. “They came to France when he was a child, and fencing was what really allowed him to join the aristocracy,” Cornelius said. “Later he became famous as a composer and violinist playing his own music.” He also led the noted orchestra Le Concert des Amateurs.

Reading about Saint-Georges, Cornelius was struck by the famous names that are part of his story. “He fought in the French Revolution with Alexandre Dumas’s father, and he was Marie Antoinette’s music teacher — they played together very often. Apparently he was very popular with the ladies of the French aristocracy, but because he was a person of color, at that time he was not allowed to marry within that class, so his legacy kind of died with him. He passed away fairly young at 53 with no children, so his music was buried for centuries. It’s really just been the last couple of decades that he’s been rediscovered.”

While his music is often compared to that of Mozart, it seems likely that Saint-Georges, in fact, had an influence on his Austrian counterpart. In 1778, when Mozart and his mother visited Paris, Saint-Georges, eleven years his elder, was a well-established celebrity there. The Chevalier (like J.C. Bach) also wrote some of the earliest sinfonia concertanti, setting the stage for Mozart’s own entries into the genre.

Speaking of which, that form might require some explanation: it emerged out of the Baroque concerto grosso, and compared to its ancestor, the double or triple concerto, it requires more blending with the ensemble. “It’s delightful,” Cornelius said, “more of a chamber music experience with some shining virtuosic moments.” Added Johnston, “You’re part of the texture more often than not, as opposed to fighting against the texture.”

BlueWater concerts are the main intersection between Johnston’s and Cornelius’s careers, but there’s more overlap. Johnston is concertmaster of the Erie Philharmonic (where Daniel Meyer is also conductor), and Cornelius recently filled in for him in that chair — which she’s also done several times in BlueWater.

Delving into their separate musical lives, Johnston is in his third year performing with the Pittsburgh Symphony. “I’m not a tenured member, so I get annual contracts with them,” he said. “It’s a wonderful orchestra, and it’s certainly been an education for me.” He lives in Pittsburgh and travels to Cleveland “maybe once every other week,” he said. “And it’s busy. Pittsburgh gives me time off for BlueWater and Erie, and I do a lot of driving!”

As for Cornelius, she’s concertmaster of Heights Chamber Orchestra and also performs with the Canton Symphony, the Cleveland Pops, ProMusica Columbus, and the Breckenridge Music Festival in Colorado. And she loves living in Northeast Ohio. “There’s just such a rich musical tapestry. It’s really great to be a part of it.”