During a class interview via Zoom, Kailyn Martino, who created that adaptation, said the goal was to make sure that their version would be engaging for elementary school students. “We’ve included the most memorable music from the opera like the Prayer and the Sandman and Dew Fairy arias, and the scene where Gretel teaches Hansel to dance. The plot is driven forward through the narration, so we get to share the entire opera with the kids without keeping them there for hours.”

Kathleen Davies, who assisted with creating the narration, pointed out that “The idea was to have a two-day workshop. On the first day we would talk about what opera is and what an opera singer does, and the next day would be the performance.”

With the abridged musical score in place and the partnering school on board, what could possibly go wrong?

After the pandemic interrupted their plans, the students in Senior Workshop: MUC 448, adopted a “the show must go on” attitude and figured out how to make the project work online.

Click here to visit the Opera Interactive website where you can listen to the story of Hansel and Gretel, learn the opera’s children’s chorus, watch a dress rehearsal (available May 1), and enjoy the performance (available May 8). Children of all ages are invited to submit artwork inspired by scenes from the opera. (The deadline is May 5). Click here to learn more.

Making my way around the Zoom squares, I asked each member of the team to talk about their involvement in the project and what they learned from the experience.

Kathleen Davies (California) will sing the role of Gretel. She also helped to create the storybook script and the narration.

This is the class that I’m getting the most from after the change — most classes are the same, they’re just online. But even though this one is very different from when we started, we’re still learning. So many things that we were looking forward to, like senior recitals, were cancelled and getting to do our senior capstone is giving us something that we can still hold onto — something normal about our last semester.

Kailyn Martino (Pittsburgh) will sing the role of Hansel. She was responsible for the adaptation and musical cuts as well as helping to create the narration and teaching the children’s chorus.

I am a soprano (the role of Hansel is usually sung by a mezzo), but I’m happy to step into the role — it’s not too low. I’m having a lot of fun doing costuming and makeup without having any designers to work with. It’s not like I can go to the store and buy things: we are supposed to use what we have at home. That’s been a cool experience. I’ve been digging through the closets and I even turned an oven rack into a prop to make it look like I am in a cage.

Jake Dufresne (Cincinnati) who will portray the Father, is also responsible for the audio and video editing.

I’m starting to move in the direction of audio production. This project has been interesting. How do you deal with the audio when you’re trying to perform an opera on a Zoom call, make it look live, and sound in-sync like a professional recording?

The music is playing through the Zoom call — we mute ourselves and record our parts on a voice memo. Then everyone sends their audio files to me and then I line up the accompanying track with the voice track. I’m now in the process of putting that together with the recorded Zoom call. That way it will all sound perfectly in-sync even though it could never be that way in real life. But there will always be challenges regardless of what you do. The technology is often working against you, so you need to find ways to maneuver around the problems. It’s been a lot of fun to figure out how to make it look and sound like a seamless recording.

Sarah Antell (Phoenix) takes on the role of the Witch in addition to being responsible for collecting the art submissions.

My Witch is a little bit different. She’s whimsical, manipulative, charming — but very rude to Gretel. It’s been a challenge to learn the role without being able to work off of Hansel’s and Gretel’s dramatic energy. But Kailyn’s wonderful cutting of this piece has given the character some good lines. I get a lot of joy from playing evil characters, it’s one of the things I like to do.

Caroline Eberhardt (Massachusetts) will sing the role of the Mother and create the digital program book.

Yes, I’m the one who sends them into the woods in the first place where they meet the Witch. We’ve decided to make the character into someone who cares about them, more like their real mother, not a step-mother type as she is often portrayed.

Originally I was to be in charge of props but now I’m working with Scott on the digital program.

Oliva Beal (Akron) will sing the role of the Sandman. She also worked on the project’s marketing and publicity.

It was fun to be creative with a character that is such a figment of the imagination — I’ve used the sheet off my bed to create the Sandman. Along with input from everyone else, I put together the mission statement: what the project is and how we will present it to the public. I also collaborated with Jenny Taraba (BW Conservatory communications manager) giving her the information she needed to create visuals.

Emma Steward (Cincinnati) will serve as the narrator and sing the role of  the Dew Fairy. She was also responsible for fundraising and grant writing (the project received funding from Women for BW). Steward also assisted with marketing and publicity.

The Dew Fairy is a great role even though she only has the one aria — she wakes up the children after the Sandman puts them to sleep. It’s fun to become this magical creature in the woods. The music has been fun to learn.

The narration ties together the parts of the story that needed to be cut. Like at the beginning, I say, “Hansel and Gretel didn’t do any of their chores and their mother is very mad.” It was fun to put it together and make it more interactive as well.

Kailyn (Martino) was the one who actually created the musical cuts. She went through the score with a lot of detail and picked out some things, then came to me and asked if it could work. We tweaked things a little bit, but she did the hard work.

I have a hybrid digital piano, a Yamaha Avant Grand, with a piano action but no strings. I have it connected to my iMac so I can use a real piano to record directly into the computer. We had started learning the music before the pandemic hit, but once it did I recorded the tracks so they could continue to work on the music.

There are things that we can take from a situation like this, like how to create a meaningful artistic product, and how to connect people in the bigger world. 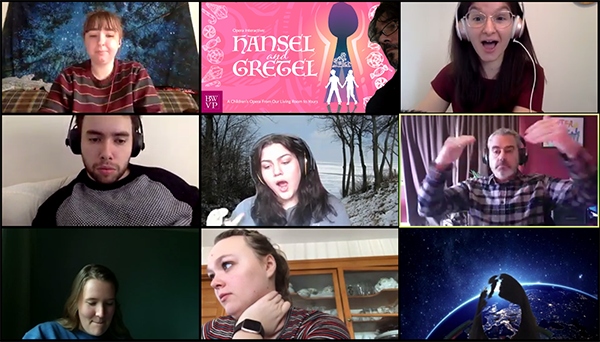 Closing out our discussion, Kailyn Martino said that everyone is grateful to have a way to musically collaborate with their colleagues. “We see our voice teachers and coaches  once a week, which is great, but there are no other opportunities to work with other singers and actors. So this project has been wonderful.”

Scott Skiba, BW’s Director of Opera Studies, noted that groups of students are responding differently to the remote learning situation, but he is thrilled that this group has stuck it out. “They all could have turtled, but they’ve embraced it and approached it with a positive attitude.”

Jake Dufresne had the final word — “Thanks, BW.”

END_OF_DOCUMENT_TOKEN_TO_BE_REPLACED

Tower dedicated this surprisingly brief work to “women who take risks and are adventurous.” Adventurous to be sure. While the opening theme is a subtle echo of Copland’s, the CSO brass was remarkably bright, crisp and crackling in its relentless morphing of the motif into quick, layered variations, both delicate and discordant, robustly spiced with startling bursts of timpani. END_OF_DOCUMENT_TOKEN_TO_BE_REPLACED