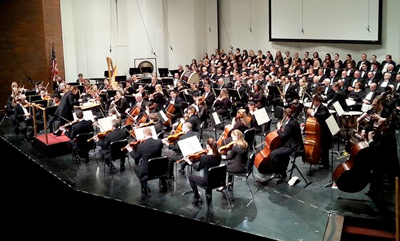 For the final concert in the Canton Symphony Orchestra MasterWorks series of the 2015-2016 season, conducting duties were split. Rachel Waddell, CSO Associate Conductor, directed the ensemble in Carl Maria von Weber’s Overture to Oberon, and the Ohio premiere of Dreamtime Ancestors by American composer Christopher Theofanidis. Rounding out this eminently spirited program were Morten Lauridsen’s Lux Aeterna, and Alexander Borodin’s Polovtsian Dances, both works for orchestra and chorus, and both conducted by CSO Chorus Director Britt Cooper (pictured above).

Waddell’s displayed a charismatic fervor in her vivacious conducting of the Overture to Oberon. At once spunky and intimate, it was as if she thoughtfully absorbed every musical passage — whether calm and enchanting, or turbulent — and at the same time seemed to pour every note back into the ensemble. It was a sensibility eagerly reciprocated by the orchestra as it responded with marvelous tonal depth and palpable exuberance.

That same chemistry was all the more apparent after intermission in the Theofanidis work, a tone poem in three movements, composed in 2015. As Waddell explained in her introductory comments, Dreamtime Ancestors is a reference to Australian aboriginal creation myths. The music is a sweeping episodic journey, as visceral as it is ethereal, symbolizing the fusion of past, present, and future into a single living entity containing the stories and potential energy of all of us.

Indeed, the orchestra was mesmerizing in its suggestions of primordial forces in constant flux and realization. Throughout, there was the sensation of cyclic pulsing, and at times an eerie mood of dissonant imminence. The second movement is marked by an unearthly harmonic emergence, represented by the piercing drone of the strings. Finally, in the movement called “Each Stone Speaks a Poem,” there’s a sparkling brassy burst, a revelation. The earth’s crust is talking. Call it the sound of timelessness. 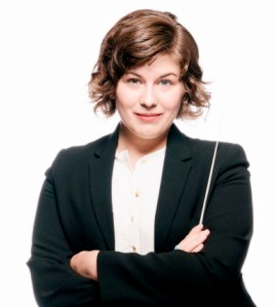 Certainly not as cosmic in scope as the Theofanidis work, Alexander Borodin’s Polovtsian Dances still has a timeless character all of its own. Part of that character is no doubt due to one of its central themes, a lovely melody now instantly familiar to us since being adopted for “Stranger in Paradise” in the 1953 Broadway hit, Kismet. In any event, the performance here, resplendent in orchestral and choral color, was a wild and vigorous end to the evening.

While all of the program selections were surely inspired and inspiring enough, it was the second piece on the program, the wholly — and holy — immersive performance of Lauridsen’s Lux Aeterna (Eternal Light), that was arguably the most transfixing of the evening.  It is a modern work, composed in 1997, that recalls aspects of the traditional Requiem Mass. But there is little if anything of the morbidity that we find in some famous predecessors’ Requiems. This cathartic masterpiece is all about Divine light and its power to transform the darkness of grief and sorrow into peace.

There were moments throughout the five movements, played without pause, when Britt Cooper’s conducting suggested, interestingly enough, the impassioned and authoritative promptings of an intercessory priest sustaining a superb aural balance between orchestra and singers so that both could soar without one clouding the other. The Canton Symphony Chorus, combined with Walsh University Chamber Singers, pronounced the beautiful polyphonic Latin chants with astonishing clarity and precision, infusing them with genuine solemnity and unfettered joy.

Is it possible for choral magnificence of this kind to transcend the incidentals of its own substance and become something else?  Absolutely, though I’m somewhat at a loss for naming it. Suffice to say that whatever we may choose to call such a phenomenon, it wasn’t simply great music that we in the audience experienced here. This was a baptism.

END_OF_DOCUMENT_TOKEN_TO_BE_REPLACED

The strings-only work by Berg has made relatively frequent appearances on the Orchestra’s programs. In 2021, the musicians recorded it for the In Focus series, and it appeared again on last year’s European tour. Friday’s rendition maintained the group’s characteristic light and effortless playing, each section blending as much as possible to echo the work’s original form as a string quartet. At fifteen minutes total, the piece is quite short, but the dense encoded musical meanings require some extra-attentive listening. Splitting up the three movements ensured that each one could be appreciated on its own. END_OF_DOCUMENT_TOKEN_TO_BE_REPLACED