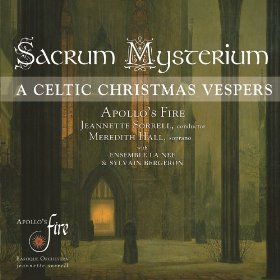 Fire has recently released two recordings: Sacrum Mysterium: A Celtic Christmas Vespers, recorded a year ago after its first performances in Cleveland (and revived for four performances this month); and Handel, a collection of ceremonial choral works that Cleveland’s baroque orchestra and singers recorded live in concerts here in October, 2008 and February, 2007. Both of these splendid recordings are a must-have for early music fans.

As much of a liturgist as she is a music director, Jeannette Sorrell enjoys placing musical selections within a ritual structure. In Sacrum Mysterium, the floor plan is a 13th century Vespers preserved in the Sprouston MS in Glasgow attributed to St. Kentigern, the city’s patron — but before, during and after, the program takes detours to explore wonderful Scottish and Gaelic carols, lullabies, folk music and other tunes ranging from medieval chant to 18th century jigs and reels, creating an irresistible mix of Celtic-inspired music. Apollo’s Fire’s excellent collaborators are Sylvain Bergeron and his Montréal-based Ensemble La Nef, who are well-known for putting together their own programs seamlessly uniting period art and folk music (whose borders are remarkably porous).

The vocal star of Sacrum Mysterium is soprano Meredith Hall, whose strong, clear, expressive voice can lift any melody above the commonplace, but who infuses Taladh Chriiosda and My Lagan Love (but set to W.C. Dix’s 1865 words What Child is This) with melting lyricism, and negotiates the tongue-twisting lyrics of Duan Nollaig with astonishing precision. Hall happens to have grown up in Newfoundland, which allows her to add a bit of Scottish spin to English words.

Though some selections may have dubious Celtic roots (Veni, Emmanuel, Noël Nouvelet, the Sussex Carol), that really doesn’t matter; they fit right into a captivating mix of solo, choral and instrumental selections, all of which are masterfully and lovingly performed. Even the folksier numbers are polished to a sheen. When the last “Amen” has been sung and church is over, the company moves to the pub for O’Carolan’s Cup and O’Carolan’s Favorite Jig, and At work on the Land and Tatter Jack Walsh, winningly played (and danced) by violinists Olivier Brault and Julie Andrijeski and expertly fluted and hammered out by Kathie Stewart and dulcimer virtuoso Tina Bergmann. The whole production — which began with a solemn processional — ends in a lively, infectious reel called Christmas Eve.

For those who missed the live performances, Apollo’s Fire has thoughtfully provided a bonus DVD with five video scenes from performances of Sacrum Mysterium at Trinity Cathedral. The faces of the performers are fully as radiant as their singing and playing.

Handel explores the career of a composer born in Germany, trained in Italy and adopted by England, who always knew what his audience wanted to hear. In Italy, he gave his patrons — members of the Roman Curia — the complex, virtuosic, operatic music you can hear in Dixit Dominus, a Vespers psalm Handel composed in 1706 at the age of 21. Seven years later, he was working for Queen Anne in London, and produced a birthday ode more in line with British taste and sensibilities. Much later, when Handel was 42 and had become a national treasure, he had occasion to write music for the crowning of George II in Westminster Abbey and he pretty well established what British pomp should sound like in such works as Zadok the Priest. 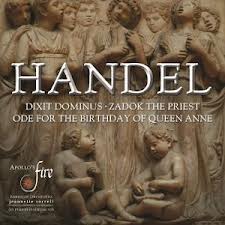 up that mood, Apollo’s Fire begins the Handel CD with timpanist Matthew Bassett’s version of J.D. Philador’s Batteries de timballes, ending with a burst of “Long live the King!” energy excerpted from Zadok. Eternal Light, the Birthday Ode, begins with an Arioso combining the arresting, countertenor-like voice of mezzo-soprano Meg Bragle with the sweet, golden tones of Barry Bauguess’s trumpet. The lyrical voices of soprano Kiera Duffy and the AF Singers join the mix later in this gentle birthday tribute reminiscent of those written earlier by Henry Purcell. The echo chorus in the final movement is delightful.

Jeannette Sorrell mysteriously and inexorably builds the orchestral prelude to the first, explosive choral entrance in Zadok. The chorus sings with clear tone and excellent diction and energizes its melismas splendidly (the brisk tempo would never work in Westminster Abbey, but imagining ideal performing conditions is one of the reasons we have recordings!)

The continuously surprising work on this recording is Dixit Dominus with its wild harmonic turns in the opening chorus, a crazy fugue (Tu es sacerdos) and haunting harmonies (De torrente in via). Virtuosic writing abounds and the chorus and soloists (Sandra Simon, Kiera Duffy, Meg Bragle, Scott Mello and José Gotera) toss their complex lines off with flair and style.

As a bonus track, Apollo’s Fire adds a celebratory double chorus from near the end of Israel in Egypt, “The Lord Shall Reign”, an oratorio Handel wrote in 1739 at the age of 54.

Both CDs were recorded at St. Paul’s Episcopal Church in Cleveland Heights by the sterling team of Erica Brenner (recording producer and editor) and Thomas Knab (recording engineer) and are released on the AVIE label. Informative liner notes are provided in English, French and German.

Not such a bad thing, as it turns out. “Building Bridges Together,” which debuted as a video production on November 21, combined the strengths of two fine Cleveland performing arts organizations in a beautifully edited virtual event — bringing them into the same performing space for the first time through digital means. END_OF_DOCUMENT_TOKEN_TO_BE_REPLACED