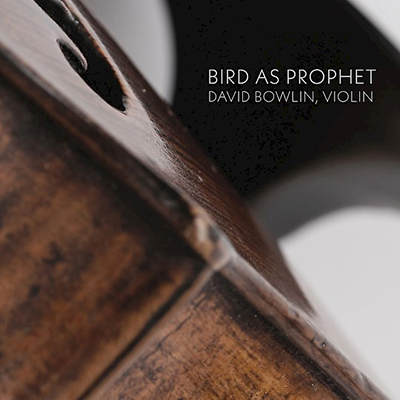 On his latest CD, violinist David Bowlin presents an astonishing array of works that showcase his extraordinary ability as an interpreter of diverse styles of contemporary music. Released on New Focus Recordings, Bird as Prophet is a fantastical listening journey for all — not just new music aficionados. Throughout the recording, Bowlin proves himself to be a player of abundant technique, however it is his innate expressive abilities that make this album so attractive.

Bowlin’s musical prowess reveals itself on the album’s opening track — Mario Davidovsky’s Synchronisms #9 for violin and electronics (1988). Here the violinist doesn’t just skirt around the pre-recorded sounds, he finds his way inside them, bringing out the inner beauty of the composer’s abrupt mood changes and musical body slams.

A founding member of the International Contemporary Ensemble, Bowlin is joined by ICE cellist Katinka Kleijn in Alexandra Karastoyanova-Hermentin’s Kastena for violin and cello (2003). The haunting work begins with a cello drone over which Bowlin plays a dramatic cadenza that is full of heart-wrenching imagery. The ensemble between players is astonishing, especially in the extended unison passages that move apart ever so slightly and then reunite.

Pianist Tony Cho joins Bowlin in Martin Bresnick’s alluring Bird as Prophet (1999), a work inspired by the music of Robert Schumann and Charlie Parker. Full of Romantic glory which is totally embraced by the performers, this fascinating piece doesn’t reveal its full self on a first listen. Sudden emotional changes and harmonic structures that initially sound odd, sound perfectly natural the second time around.

Following a magical performance of George Walker’s brief Bleu for solo violin (2011), the album returns to the music of Russian/Bulgarian composer Alexandra Karastoyanova-Hermentin, this time for Mari Mamo for violin, flute, and percussion (2009). For nearly 17 minutes, Bowlin, flutist Conor Nelson, and percussionist Ayano Kataoka weave together colorful lines of this Bulgarian folk music-inspired piece. Near the end the players remain silent while the composer sings an improvised melody in the Bulgarian tradition.

Bird as Prophet concludes with Du Yun’s stunning Under a Tree, an Udātta (2016). “Udātta” refers to an inflected raised tone in Vedic chant, and you can hear the microtonal shadings in the violin part. With a recording of Vedic Sanskrit chanting as his partner, Bowlin finds his way inside the composer’s exotic sound world that draws you in and holds your attention. His commanding playing turns this spellbinding piece into a work of symphonic scale.

END_OF_DOCUMENT_TOKEN_TO_BE_REPLACED

Rodgers & Hammerstein’s Cinderella was originally produced for television in 1957 — seven years after the animated Disney film was released — and starred Julie Andrews. According to the Rodgers & Hammerstein website, it was viewed by over 100 million people. END_OF_DOCUMENT_TOKEN_TO_BE_REPLACED

The story line has its origin in an 1855 play and an 1842 farce that Thornton Wilder mined for his 1938 play The Merchant of Yonkers. When that turned out to be a flop, in 1954 Wilder made the crucial decision to re-center the show around the character of the legendary marriage broker Dolly Gallagher Levi and renamed it The Matchmaker. END_OF_DOCUMENT_TOKEN_TO_BE_REPLACED

The Dodero Center for the Performing Arts at the Gilmore Academy in Gates Mills is one feature of an impressive campus. The auditorium is shallow, the stage is deep, and the ensemble played without a shell. Throughout the program, the sound, especially in instruments’ lower registers, tended to disappear. END_OF_DOCUMENT_TOKEN_TO_BE_REPLACED