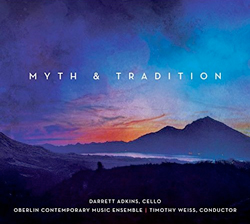 Myth & Tradition unfolds like a series of trials that our protagonist, cellist Darrett Adkins, must overcome. Alongside the impressive Oberlin Contemporary Music Ensemble, directed by Timothy Weiss, Adkins conjures a mythical bird in the world premiere recording of Su Lian Tan’s five-movement Legends of Kintamani (2016). Next he navigates the brainy twists and turns of Philip Cashian’s Concerto for Cello and Strings (2012), another work written for Adkins.

Then, deep in the Passacaglia of Richard Wernick’s Concerto for Cello and Ten Players (1979), the cellist opens a door and finds himself alone. Manic, thoughtful, and personal, his four-and-a-half minute cadenza is the heart of the album Myth & Tradition, recorded over a span of four years and released on the Oberlin Music label in August.

Adkins sets off on his journey fittingly with Tan’s “Prelude,” pastoral and nostalgic but filtered with unease. Tall grass begins to sway as the sounds of fuzzy snare drum and scratchy cello emerge in “Garuda,” and soon the king of the birds and his minions reveal themselves.

“Song” is a mix of dreamy and demented, while “Night” spotlights the different moods of darkness. Clarinet, piccolo, and solo cello engage in a pointy dance to kick off the “Finale,” the strings occasionally growling from the sidelines. Tan’s travels to Bali come through in gamelan-like textures and melodic patterns, wrapping things up abruptly but with splendor.

The next challenge for the cellist: negotiating a maze. Cashian’s single-movement, 20-minute Concerto is made up of sections that sometimes interconnect and other times sit side by side, turning on a dime. Weiss and CME maintain a precise sense of ensemble amidst unrelenting rhythms littered with tiny rests, and Adkins adds spice with his nuances of articulation, and later timbre. He holds you captive for every one of the 33 seconds he spends sustaining a single note near the end.

The ensemble winnows down from 28 members in the Tan to 17 in the Cashian and 10 in the Wernick, a true chamber piece where each of the players brings something special to their many solo gestures. In “Entrada,” Wernick covers some of the same musical territory as Cashian, but his “Passacaglia” puts the listener on edge when it begins with otherworldly percussion and string unisons.

And then comes the long cadenza. Breathing heavily, our hero snarls, cries, and reflects, and by the end of his monologue all he seems to have left is one low note he can’t help but repeat. A solemn open fifth in Wernick’s colorful orchestration provides the work a mythic sense of closure, the kind that’s both solid as stone and begs to live out its magic again.

Myth & Tradition is available on Naxos, Amazon, iTunes, and Spotify.

END_OF_DOCUMENT_TOKEN_TO_BE_REPLACED

Supported by engagingly, yet simple staging by Cara Consilvio, a well-prepared cast of singers told the archetypal story of Cinderella with charm and flair. Framing the production was  a sparse but colorful set and wonderful lighting by Dave Brooks. END_OF_DOCUMENT_TOKEN_TO_BE_REPLACED