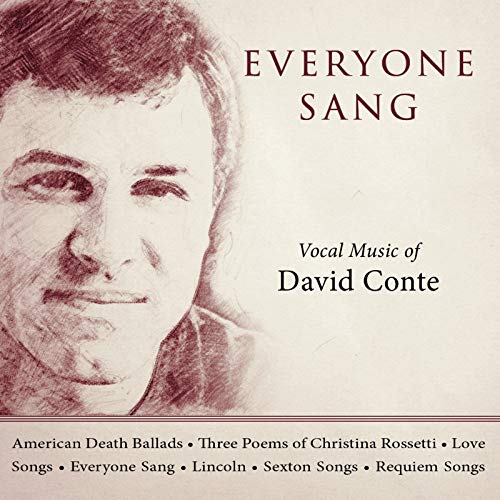 While many in the Cleveland area may be familiar with the choral works of Lakewood native David Conte — his music is regularly performed by ensembles such as Good Company — his recent CD, Everyone Sang, offers another side of his vocal-writing talents. Released in August on the Arsis label, this two-disc set comprises engaging works for solo voice and piano, as well as voice and instrumental ensembles.

Mezzo-soprano Kindra Scharich and pianist Kevin Korth deliver a pensive interpretation of Three Poems by Christina Rossetti. The third poem, “A Hope Carol,” is especially beautiful. Thorsett and Churchill are joined by cellist Emil Miland for Love Songs, of which the third, “The Moment,” is haunting. Disc one concludes with the title piece. Bass Matt Boehler, who is joined by Korth, sings with a richly hued voice during “Homecoming.” Boehler is powerful in his delivery of the fourth song, “Everybody Sang,” while Korth plays his technically challenging lines with ease.

Disc two is devoted to works for larger forces, beginning with Lincoln for baritone, English horn, trumpet, and string orchestra. Here Conte sets a text by John Stirling Walker, who uses quotes from Ralph Waldo Emerson’s eulogy for Lincoln. The vocalist, A.J. Glueckert,  brings a reflective quality to the words. His higher range is particularly impressive. The instrumental soloists and the San Francisco Conservatory String Orchestra, under the direction of Marika Kuzma, contribute well-shaped phrases and tight ensemble to this Coplandesque work.

Soprano Marnie Breckenridge shines during the theatrical Sexton Songs. Her voice is flexible and full-bodied as she moves between lyrical lines and semi-spoken words in “Rowing.” She has a sassy swagger in “Her Kind.” In the fifth song, “Us,” she is at her most dramatic. Nicole Paiement and the SFCM New Music Ensemble deliver polished performances from beginning to end.

Everyone Sang concludes with the emotionally dramatic Requiem Songs for soprano, violin, harp, and string orchestra. Ann Moss’s long, fluid lines are exquisite in “Exaudi.” She easily negotiates the musical leaps and mood changes in “Dies Irae,” and gives a sense of hope to “In Paradisum.” Whether the music is lyrical or virtuosic, violinist Kay Stern is outstanding, along with harpist Douglas Rioth and the SFCM String Orchestra, conducted by Eric Dudley. Requiem Songs brings the album to a sublime conclusion.

END_OF_DOCUMENT_TOKEN_TO_BE_REPLACED

Rodgers & Hammerstein’s Cinderella was originally produced for television in 1957 — seven years after the animated Disney film was released — and starred Julie Andrews. According to the Rodgers & Hammerstein website, it was viewed by over 100 million people. END_OF_DOCUMENT_TOKEN_TO_BE_REPLACED

The story line has its origin in an 1855 play and an 1842 farce that Thornton Wilder mined for his 1938 play The Merchant of Yonkers. When that turned out to be a flop, in 1954 Wilder made the crucial decision to re-center the show around the character of the legendary marriage broker Dolly Gallagher Levi and renamed it The Matchmaker. END_OF_DOCUMENT_TOKEN_TO_BE_REPLACED

The Dodero Center for the Performing Arts at the Gilmore Academy in Gates Mills is one feature of an impressive campus. The auditorium is shallow, the stage is deep, and the ensemble played without a shell. Throughout the program, the sound, especially in instruments’ lower registers, tended to disappear. END_OF_DOCUMENT_TOKEN_TO_BE_REPLACED