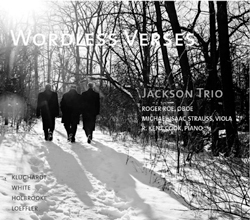 Name four chamber works scored for oboe, viola, and piano. Then name four chamber works for oboe, viola, and piano that are based on poetry. Most of us would give up before getting to the second question. But the Jackson Trio — oboist Roger Roe, violist Michael Isaac Strauss, and pianist R. Kent Cook — have turned up pieces by August Klughardt, Felix Harold White, Josef Holbrooke, and Charles Martin Loeffler that fit the criteria for their fascinating album, Wordless Verses, released on the Oberlin Music Label.

And what interesting verses these four composers have set to wordless music. For the five fantasy pieces in his 1872 cycle Schilflieder (“Song of the Reeds”), Klughardt turned to poetry by Nikolaus Lenau — whose writings  fueled the imaginations of Franz Liszt (Faust), Richard Strauss (Don Juan), and Alban Berg (Seven Early Songs).

Felix White, who served as keyboardist for the London Symphony in the first half of the 20th century, went back to the 17th-century English metaphysical poet Andrew Marvell for his wordless setting of The Nymph’s Complaint for the Death of her Fawn (1921), which is actually a reflection on human inconstancy.

Edgar Allen Poe was a favorite of Josef Holbrooke, an English pianist and composer who based more than 30 compositions on the Baltimore poet’s fantastical works. Holbrooke’s 1917 Nocturne is based on Poe’s Fairyland (an eerie place full of unsettling imagery).

The best-known composer on this album is the German-born Charles Martin Loeffler, longtime assistant concertmaster with the Boston Symphony, whose Trois Rhapsodies on poems by Maurice Rollinat were originally meant to be sung. Loeffler denuded two of them of their words, resulting in the truly wordless Deux Rhapsodies (1901). Here, the chilling verses paint images of a pond populated with “aged fish struck blind” (in L’Étang) and a bagpiper of death whose cries are “like a woman’s agony” (in La Cornemuse).

Needless to say, this colorful and often neurotic poetry inspired the four composers on this album to write some evocative — and often quite beautiful — music. Roe, Strauss, and Cook play this unusual repertoire with excellent ensemble, and beautiful, expressive tone and phrasing in their solo moments. Engineer Ryan Miller caught their warm playing vividly at sessions in Clonick Hall at the Oberlin Conservatory.

Having presumably used up most of the available pieces for oboe, viola, and piano in assembling this striking album, perhaps the Jackson Trio will persuade some of today’s composers to craft other “wordless verses” for the ensemble. Who needs words when the playing is this poetic all by itself?

Speaking with the conductor by phone in Cleveland this past Wednesday, I began our conversation by telling him that I had a wonderful conversation with Stefan Jackiw, who was singing his praises (read the article here). Especially how sensitive the conductor’s ear is with regards to color, which Jackiw noted is quite important in the concerto’s passacaglia. END_OF_DOCUMENT_TOKEN_TO_BE_REPLACED

The music isn’t easy to play, either. Over the course of two hours, all of the musicians brought fantastic focus to the unrelenting tricky rhythms and countless layers of parts, all of which require a high level of individual responsibility. Even in the moments of calm, the accompaniment remains perpetually unsettled. Adams — who made a sprightly presence on the podium — combines minimalist, repeating motives in gradual layers, which eventually become so dense they overwhelm the senses. Lisa Wong deserves special mention for her thorough preparation of the Cleveland Orchestra Chorus, as does Jennifer Rozsa for the Children’s Chorus, which made a brief but memorable appearance in the last few minutes. END_OF_DOCUMENT_TOKEN_TO_BE_REPLACED

Warner was a fitting choice not just symbolically, but also sonically. The combination of Baroque strings, theorbo, harpsichord, and organ created a nice blend and balance, allowing the opportunity for softer instruments to stand out. In Johann Rosenmüller’s Sonata à 5 in g, Doug Balliett’s violone pizzicatos resonated beautifully, and in Johann Heinrich Schmelzer’s Sonata in d, harpsichordist Elliot Figg became an equal player in the texture with his clever improvisations. The slight exception was Joshua Stauffer on theorbo — despite the instrument’s big physical presence on stage, he received little time in the spotlight. END_OF_DOCUMENT_TOKEN_TO_BE_REPLACED