If you haven’t already warmed up to French Baroque clavecin music, Chicago-based keyboardist Jory Vinikour’s L’Unique: Harpsichord Music of François Couperin should make a strong impression on your musical tastes. The most prominent member of a musical dynasty second only to the German Bachs, François Couperin left a large treasure trove of keyboard works, 234 in all, arranged in 24 suites or Ordres.

Compared to the sturdiness of 18th-century German Baroque music, that of their French counterparts can seem fussy and artificial, replete with filigree and festooned with ornamentation — factors that can frighten away both listeners and performers.

Couperin himself realized that the outward complexity of his musical textures was daunting to performers, leading him to write a treatise on exactly how the smallest details of his music should be played. But underneath the surface, his music is so fully architectural in form and well-crafted in its harmonic structure that Johannes Brahms was inspired to co-author a complete 19th-century edition of Couperin’s keyboard works.

Jory Vinikour has chosen three Ordres for this disc that show the great variety and charm of Couperin’s music. No. 6, in the unusual (for the Baroque period) key of B-flat, contains rondeaus and character pieces labeled with fanciful titles that translators are hard put to figure out — like the famous Les Baricades Mistérieuses. 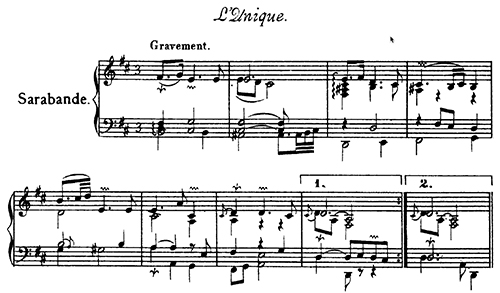 No. 7, which alternates between pieces in G major and minor, features Les Petits Âges, a suite of four movements that trace the stages of human development. No. 8, in b minor, with its expressive dominant chord of F-sharp, contains the wonderful Sarabande L’Unique that gives the album its name, and ends in this performance, the last two pieces being reversed, with the famous Passacaille.

While the composer himself is responsible for the expressive harmonies, the changes in register and texture, and the major and minor alternations that carry the musical narrative along so agreeably from piece to piece, Vinikour’s clean, transparent playing, his elegant pacing, and eloquent handling of details add the magic that makes the listening experience a sheer joy.

As pianist Angela Hewitt wrote in a 2003 Guardian article just after deciding to embark on a study of Couperin’s keyboard music,

Ornamentation is the very essence of his music. It serves an expressive purpose, emphasising one note, making you wait for another, all relating once more to gesture and mood. It takes a long time to absorb it naturally into the interpretation of a piece, let alone to memorise it.

Jory Vinikour has clearly taken the time to absorb Couperin’s style and incorporate it seamlessly into his musical DNA. His partner for the current enterprise, a 2010 Tony Chinnery instrument after Pascal Taskin (1723-1793), is responsive to every nuance from his fingers. It sounds terrific, and the recording captures its sound vividly.

END_OF_DOCUMENT_TOKEN_TO_BE_REPLACED

Supported by engagingly, yet simple staging by Cara Consilvio, a well-prepared cast of singers told the archetypal story of Cinderella with charm and flair. Framing the production was  a sparse but colorful set and wonderful lighting by Dave Brooks. END_OF_DOCUMENT_TOKEN_TO_BE_REPLACED