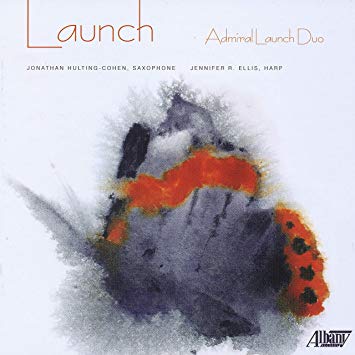 As the month of Valentines Day and love, February is abundant with hearts and couples of all kinds. The Admiral Launch Duo’s new album Launch could be seen as an “opposites attract” type of situation. Not many musicians had thought of bringing the saxophone and harp together until Jonathan Hulting-Cohen (saxophone) and Oberlin and CIM grad Jennifer R. Ellis (harp) came along. Released by Albany Records in December 2018, the album showcases 18 tracks of uniquely crafted music.

The sense of ensemble is wonderfully exacting throughout as the duo creates contrasting moods with exceptional poignancy. The album has excellent sound quality — the only shortfall is the different dynamic capabilities between the instruments combined with the harp’s inability to sustain notes at length, making the saxophone the dominating force.

The repertoire was mostly commissioned by the duo, including Natalie Moller’s Starshine & Moonfall, Patrick O’Malley’s Thaumaturgy, Christine Delphine Hedden’s Amhrán na Cásca and Kitchen Dance, Stephen Rush’s Whirlwind, Angélica Negrón’s Still Here, and Jasper Sussman’s …nice box! “Oh So Square.” The remaining tracks are arranged from previously existing works for harp and either flute, voice, or oboe. Clearly the newcomer in this genre is the saxophone, but Hulting-Cohen embraces the role whole-heartedly, making the instrument shine in a bright new light.

The playlist is wrought with a vast range of emotions, beginning with Ida Gotkovksy’s five-movement suite Eolienne. The first movement, “Lyrique,” is mysterious and scintillating. The second, “Intermezzo,” brings warmth and playfulness, reminiscent of children playing in the park on a sunny day. In the final movement, “Declamatoire,” Ellis brings out her harmonies with striking clarity and precision.

Starshine & Moonfall is magnificent, introducing an abundance of intriguing harmonies. The saxophone carries the melody throughout, occasionally taking on the chord arpeggiation from the harp. In the liner notes, Moller describes the inspiration she drew from nature, calling the piece an “evensong that charts the waning of a day through a horizon embraced by sunset, the unfurling of twilight, and the radiance of a star-speckled midnight.”

The duo breaches new territory with Whirlwind, an inventive composition the composer characterized as a “Funk-Indian Toccata plus a slow cadenza.” Hulting-Cohen whirls through his many notes with captivating enthusiasm, propelled along by the jazzy rhythms he shares with Ellis.

After Negrón’s heartbreaking Still Here, which explores conflicting and contradictory emotions in abusive relationships, comes Sussman’s …nice box! “Oh So Square,” the wackiest track on the album. Wackier than a “Funk-Indian Toccata plus a slow cadenza,” one might ask?

The answer is yes. Hulting-Cohen explores a tremendously wide range of sounds — even creating a very real-sounding scream. Sussman marks the opening of his score with this message: “think Moody Dinosaur…you’re a baby dinosaur, you’re upset—are you sad? Angry? You can’t decide!” More concretely, he describes the work as exploring “the excitingly personal space between fixed and free, a space where experimentation, storytelling, and a unique state of presence are all embraced and celebrated” — and the duo play it with gusto.

Launch is available on Amazon and AllMusic, and select tracks from the duo’s website on SoundCloud.

The first such video, capturing the October 20 performance of Resilience at First Baptist Church in Shaker Heights, delivered handsomely on that promise. Erica Brenner’s sensitive videography and audio mixing preserved brilliant performances of music that illuminated two troubled periods in history: the plague of London in 1665, and the outbreaks of cholera and dysentery that dampened but failed to defeat the human spirit at the end of the American Civil War two centuries later. END_OF_DOCUMENT_TOKEN_TO_BE_REPLACED

The Diamond Brass Quintet opened Rocky River Chamber Music Society’s new season on Monday, October 12 with nobody in the pews at West Shore Unitarian Universalist Church. Like most performances these days, the concert was only attendable online. The players were widely-spaced on the stage, plexiglass shields were in place to cut down on aerosol transmissions, and the quintet took two intervals to go outdoors and let the air in the sanctuary refresh itself. (Rehearsals had been held outside as well.) END_OF_DOCUMENT_TOKEN_TO_BE_REPLACED

“Bewitched,” the first subscription concert of this season by Les Délices, can be summed up in one word: sensational. In her introductory remarks, director Debra Nagy talked about the “Embracing Change” theme of the season and completely rethinking the concert experience for streaming. The detailed planning was in evidence throughout the program. “Bewitched” was not just a concert; it was a carefully planned musical film, with elements of drama and music appreciation, all in support of the inspired program choices featuring Medea and Circe, two famous witches (or sorceresses, if you prefer) of classical antiquity. END_OF_DOCUMENT_TOKEN_TO_BE_REPLACED

END_OF_DOCUMENT_TOKEN_TO_BE_REPLACED

Though it had amassed a vast trove of audio over the decades, The Cleveland Orchestra has come late to the game in the video department. Even so, the organization wasn’t about to rush to produce the equivalent of home movies to keep its patrons engaged while live events were on hold. END_OF_DOCUMENT_TOKEN_TO_BE_REPLACED

END_OF_DOCUMENT_TOKEN_TO_BE_REPLACED

Although it wasn’t the original plan to go online last weekend for the final round of the James Stroud Classical Guitar Competition, moving to a digital format suited the event well. Young performers Aytahn Benavi, Patricia Hernandez, Ian Tubbs, and Eric Wang played in the intimate setting of their own homes, giving everyone who tuned in a front row seat. END_OF_DOCUMENT_TOKEN_TO_BE_REPLACED