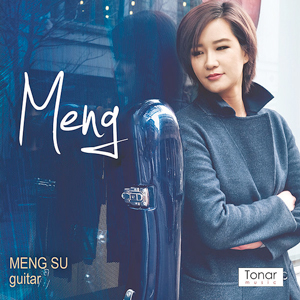 Meng Su is a superstar in the classical guitar world. After winning the Vienna Youth Guitar Competition at age 14, she took grand prize in the Tokyo International guitar competition at 17, and first place in the Parkening Young Guitarist Competition at 18. Last July, she released her first solo album: Meng. Those unfamiliar with her name prior to listening will certainly remember it after hearing this recording.

Classical guitar can sound repetitive or homogenous in large quantities to uninitiated ears. But there’s an uncanny subtlety to Su’s playing that makes each second of the album’s 63-minute runtime engaging.

In the somber opening strains of John Williams’s Avner’s Theme (from the film Munich), she demonstrates a charming, delicate wistfulness. Su exhibits the same attention to detail in the slow movements of Castelnuovo-Tedesco’s Sonata (“Omaggio a Boccherini”), Francisco Tarregá’s Gran Vals, the “Loure” from J.S. Bach’s Lute Suite No. 4, and the middle three movements from William Walton’s Five Bagatelles. These are all well-played and nicely nuanced.

But the album really sparkles in its more virtuosic passages. In particular, the Prelude from the Bach suite is marvelous. To say it is clean would be an understatement — her playing is at once impeccable and effortless, the mark of a true master. Su plays the outer movements of Castelnuovo-Tedesco’s Sonata with a gripping, nervous energy, tossing off the quicker riffs flawlessly. Her interpretation of Tarregá’s Rosita ambles along quite cheerfully, and her playing in the final Walton bagatelle is astonishing for its rhythmic exactitude.

This album is well worth a concentrated listening session, but it would also figure nicely as the background to a dinner party — and this is meant as a compliment. Full of subtlety and nuance, her playing is not showy or aggressive, but quietly beautiful and profound. Meng was recorded on the Tonar Music label and is available for purchase on iTunes, at Amazon.com, and from other retailers.

END_OF_DOCUMENT_TOKEN_TO_BE_REPLACED

Franz Welser-Möst led the final bows on Saturday night at Severance, like the star of any show should. The Cleveland Orchestra’s music director is in his element presiding over the ensemble’s annual opera production, which this season packs the drama. Verdi’s Otello — in a concert staging that opened May 21 and runs for two more performances (May 26 and 29) — demands big voices, instrumental forces to match, and a conductor who can give it all shape and direction. END_OF_DOCUMENT_TOKEN_TO_BE_REPLACED

The cimbalom was the feature of the show, an instrument capable of taking on many personas. Its performer, Chester Englander, has shaped his career around the instrument, and has inspired composers to write more repertoire for it, some of which was presented on the program. END_OF_DOCUMENT_TOKEN_TO_BE_REPLACED